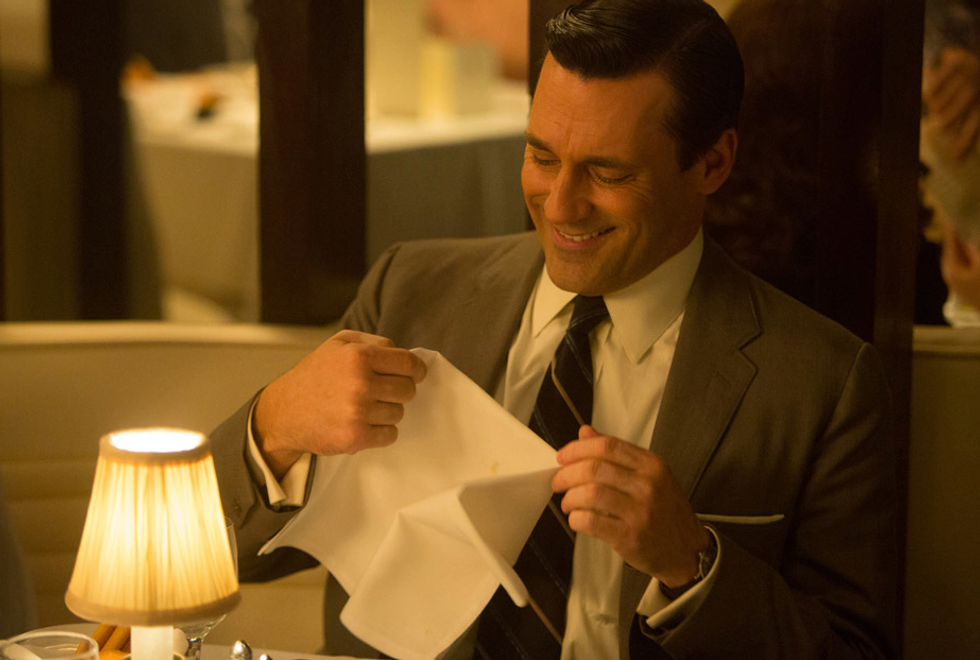 Mad Men is back, which means so is the Orange Couch!

Last night's episode was masterful. Unlike the big "reveal" of the season six premiere---that Don was cheating again---this reveal felt like an actual shocker. It seems that what Don needed to get good at his job again was to be denied the right to do it. As with women, it's the chase that motivates him. I'm super stoked about this particular plot line. Mad Men is always most interesting to me when it's focused on the politics of work, and now that the Don-is-cheating-and-drinking thing has nearly run itself into the ground, a new plot where Don has to re-establish himself as a creative genius is doubly compelling.

But what really struck me about this episode is how forcefully it signaled that just because the show is ostensibly about Don, it's also going to be about the women. Mad Men has always been smart about the cultural forces that hold women back, and how these forces are often too complex and ingrained to fix easily. At the end of last season, we saw Peggy where she belongs---in Don's chair---but now we find that the company just hired another white guy to be her boss. I don't think we're meant to believe the choice was vindictive. The partners are just small-minded and it never occurred to them to even consider promoting Peggy instead of casting around outside the company for someone who looks like what they imagine a creative director to be. That Lou is uncreative and all around terrible at his job matters less than he's the sort of guy you can easily picture on a golf course.

Joan is running into the same problem. This is probably the fourth or fifth time we've seen that Joan is an immensely talented businesswoman who can tackle all sorts of problems, only to have some clueless dude push her back into the glorified secretarial role. And yet, it never feels tired, because, unlike the cheating-and-drinking Don recurring storyline, there's endless ways for Joan to try to work the system and you always have hope this time she'll find the solution. Joan would be a great accounts executive. She is creative and broad-minded when it comes to solving problems.  But Ken sees her as an office manager and can't get past that. Making Ken the bad guy was a particularly low blow, since he's one of the more likable characters. But it shows how deeply ingrained this kind of prejudice is.

And then there's Megan, who doesn't know yet what the audience knows, which is that she is totally made for being an independent young single woman in Hollywood, and that Don is just dragging her down. Last season, a lot was made over how much Megan has grown accustomed to the lavish lifestyle that living with Don affords  her. (Yes, she makes her own money, but having a house and all other bills paid for means she can basically spend her money on expensive clothes, which she is shown constantly doing.) But, much to Don's chagrin, Megan has learned to live within much more modest means and seems, to be frank, happier for it. The color TV was Don trying to buy her off and remind her what being his wife means for her financially. But she doesn't care. The last string of "need" has been snipped and the only thing holding her to him is want. But what is left of Don to want?

That's why I think this season could go in very interesting directions. The Don/Megan storyline, which I was hostile to at first, has become a fascinating examination of the modern male dilemma of how to be around women when they don't need you anymore.  (Or anyone, really.) Don feels cast out in the cold because his ability to make people feel they need him has been taken away from him. No one needs him anymore. But could become someone that people keep around anyway, because they like him? Don needs to transition from being needed to being wanted as his value. That's a fascinating existential question---a lot more fun than just watching someone who can't stop drinking-and-cheating---and I'm super curious about where this story is headed.

So, what did you guys think? Is Don interesting again? Will Megan forgive and return? What was that whole thing with Neve Campbell about?