Outrage grows in Nigeria over mass kidnapping of teen girls 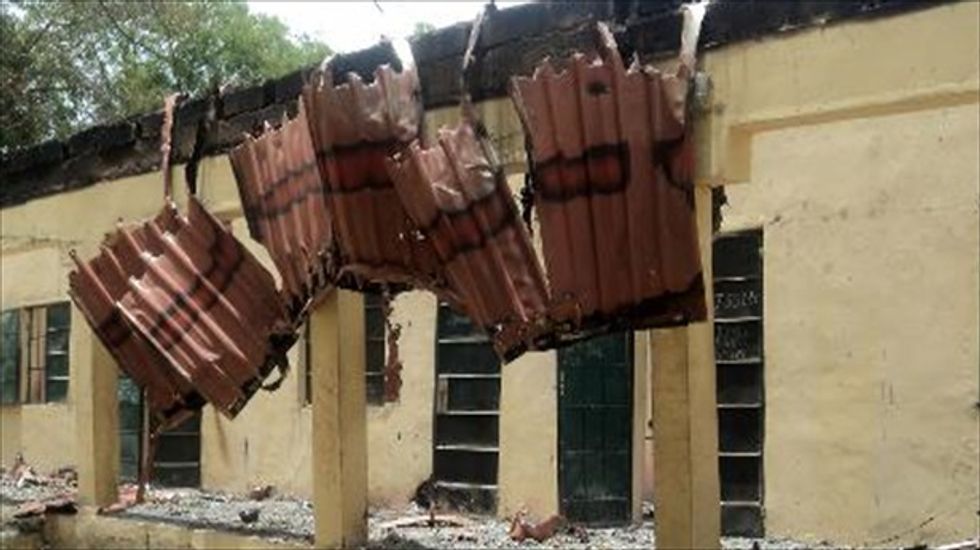 A picture taken on April 21, 2014 of a damaged classroom at the Government Girls Secondary School in Chibok in northeastern Borno state, where gunmen stormed the town the cover of darkness on April 14 [AFP]

Nigerian parents lashed out Tuesday at the government's failure to rescue scores of schoolgirls kidnapped two weeks ago by Boko Haram Islamists, as a local leader claimed the hostages had been sold as wives abroad.

"May God curse every one of those who has failed to free our girls," said Enoch Mark, whose daughter and two nieces were among the more than 100 students abducted from the Government Girls Secondary School in the Chibok area of the northeastern state of Borno.

The attack was one of the most shocking in Boko Haram's five-year uprising, which has claimed thousands of lives across northern and central Nigeria.

The outrage that followed the mass abduction has been compounded by disputes over how many girls were seized and criticism of the military's search-and-rescue effort.

Borno officials have said 129 girls were kidnapped when gunmen stormed the school after sundown on April 14 and forced the students -- who are between 12 and 17 years old -- onto a convoy of trucks. Officials said 52 have since escaped.

Locals, including the school's principal, have rejected those numbers, insisting that 230 students were snatched and that 187 are still being held hostage.

Mark told AFP that his wife has hardly slept since the attack, lying awake at night "thinking about our daughter".

Pogo Bitrus, leader of a Chibok elders group, told AFP that locals had been tracking the movements of the hostages with the help of "various sources" across the northeast.

"From the information we received yesterday from Cameroonian border towns our abducted girls were taken... into Chad and Cameroon," he said.

The girls were then sold as brides to Islamist fighters for 2,000 naira ($12) each, Bitrus added.

There was however no independent confirmation of his report and the defence ministry did not immediately answer calls seeking comment.

Some of the girls who escaped have said the hostages were taken to Borno's Sambisa Forest area, where Boko Haram has well-fortified camps.

Boko Haram's name translates as "Western education is forbidden", and it has repeatedly attacked schools during an insurgency aimed at creating a strict Islamic state in mainly Muslim northern Nigeria.

The Islamists have set schools on fire, massacred students in their sleep and detonated bombs at university campus churches.

President Goodluck Jonathan has faced scathing criticism over the attacks and the pressure has mounted since the Chibok kidnappings.

Locals have scoured the bushlands of the remote region, pooling money to buy fuel for motorcycles and cars to conduct their own rescue effort, saying they have no confidence in the military's search.

"The free movement of the kidnappers in huge convoys with their captives for two weeks without being traced by the military which claims to be working diligently to free the girls is unbelievable," Bitrus told AFP.

Nigeria deployed thousands of additional troops to the northeast last year as part of an offensive aimed at crushing Boko Haram, but security experts say the military lacks the troops needed to fully cover the region.

Dozens of Borno women clad in black staged a protest Tuesday in front of Nigeria's parliament.

The placard-carrying women rolled on the ground wailing and crying for help to rescue their daughters.

"Free the abducted children," "Chibok is crying," and "Mr President, rescue our daughters," read some of the placards.

Protest leader Naomi Mutah told three senators who received the group that they did not know the whereabouts of the girls, saying some might have crossed over to Chad.

"Our grievance is this: For the past two weeks and this is the third week, we have not heard anybody talking to us," said Mutah.

"They are suffering in the bush. Let them (authorities) help us to free them," another protester said.

In a motion Tuesday, the senate urged the government and security agencies to seek the cooperation of other countries and the UN Security Council in the rescue effort.

An organisation called Women for Peace and Justice has called for a "million-woman protest march" in the capital Abuja on Wednesday to demand that more resources be committed to securing the girls' release.

While the group is unlikely to rally a crowd of that size, support for the movement has been growing on Twitter under #BringBackOurGirls.