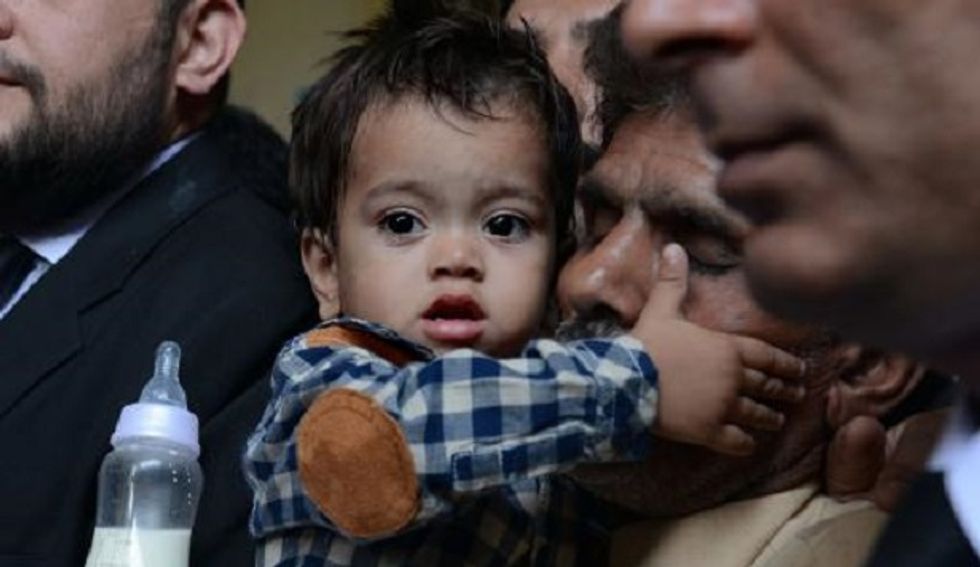 A Pakistani court on Saturday threw out charges of attempted murder against a nine-month-old baby, in a case that highlighted endemic flaws in the country's legal system and provoked widespread ridicule.

The court also launched a separate case to look into how police pressed charges against baby Mohammad Musa after his family clashed with gas company officials in a working class neighborhood in the eastern city of Lahore. Police lodged a case against the whole family.

The case drew international attention and sparked ridicule against the Pakistani criminal justice system, after the toddler was photographed crying desperately while being fingerprinted in court. His grandfather was later seen trying to comfort him with a milk bottle.

Inspector Kashif Muhammad, who was at the crime scene and pressed attempted murder charges against the baby, has since been suspended.

The charges were in direct contradiction with Pakistan's minimum age of criminal responsibility, which was raised from seven to 12 years in 2013 except in terrorism cases.

Police told judge Rafaqat Ali Qamar Saturday that the baby was "no longer required in the case."

Musa's grandfather, Muhammad Yasin, subsequently withdrew a bail application for the baby as the court dropped the case.

Yasin had accused police of fabricating the charges because they were colluding with a rival party who wanted to see the accused evicted from their land and had obtained an order to remove their gas connections.

Yasin and four others, including his son Muhammad Imran, are on bail in the case and the charges against them remain.

"We want justice and protection from the land grabbers," Yasin told reporters outside the court.

He said a land grabbing "mafia" was threatening him and other residents of the area.

"Police will be solely responsible if the mafia causes any harm to the residents," he added.

Local human rights activist Tariq Farooq said that the attitude of the police was "anti-worker and anti-poor."

"We don't expect any good from the police, who often implicate the poor in false cases and then exploit and victimize them," Tariq added.

Khwaja Khalid Farooq, a former Punjab police chief, said that implicating an infant in a murder case was "totally illegal."

He added that he was opposed to a growing reliance by police on "first information reports" (FIRs) -- when a complainant first registers a crime with police -- saying that the reports are often misused to exert pressure in disputes with other parties.

"This is an outdated system, which needs to be reformed," Farooq told AFP.

"They (the police) should rather focus on thorough investigation to get to the facts."