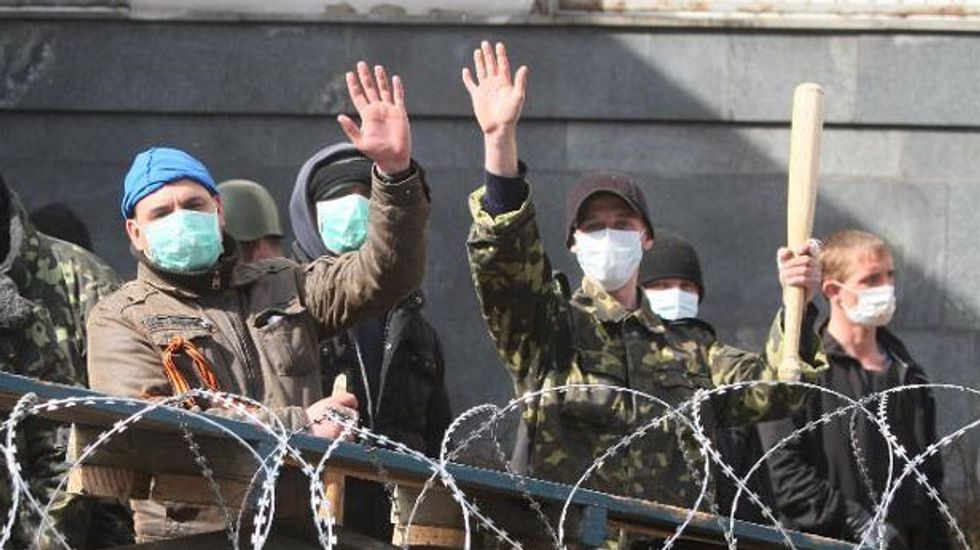 Pro-Russian activists who seized the main administration building in the eastern Ukrainian city of Donetsk proclaimed Monday the creation of a sovereign "people's republic" independent of Kiev rule.

The decision was announced to reporters by a spokesman for the protesters who came out of the occupied building.

Footage posted on YouTube showed one Russian speaker telling the packed assembly from a podium: "Seeking to create a popular, legitimate, sovereign state, I proclaim the creation of the sovereign state of the People's Republic of Donetsk."

The announcement was met by a huge roar from about a hundred men packed inside an auditorium of what appeared to be the Donetsk administration building.

The industrial eastern region's Ostrov (Island) news website reported that the activists later resolved to join the Russian Federation in a move similar to the one taken by Ukraine's Crimea peninsula last month.

The news site said the resolution was met with cheers and chants of: "(Russian President Vladimir) Putin, help!"

The Interfax news agency reported that the self-proclaimed leaders of Donetsk vowed to hold a regional sovereignty referendum no later than May 11.

Ukraine's latest secessionist crisis prompted Prime Minister Arseniy Yatsenyuk to send his deputy Vitaliy Yarema to the region in order to establish a semblance of control.

The Donetsk administration building on Monday remained surrounded by about 2,000 Russian supporters -- some of them armed.

Pro-Russian protesters also remained in control of the headquarters of the security service of the eastern region of Lugansk. Activists freed the administration building in Kharkiv on Monday after occupying it overnight.

Donetsk Governor Sergiy Toruta urged the government to hold an urgent meeting of the national security and defence council in his region.

"Today, a plan is being implemented in the Donetsk, Lugank and Kharkiv regions to destabilise peace as well as social and economic stability," Toruta said in a statement.