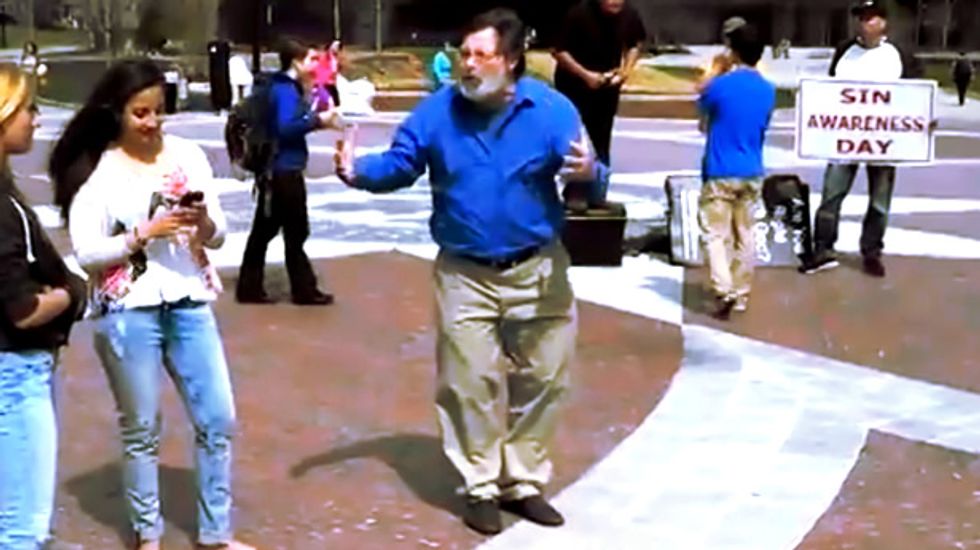 Itinerant evangelists are upset that an anthropology professor at the University of Connecticut mocked their brimstone-and-hellfire mode of preaching the gospel on Tuesday.

Don Karns of Hampton, Virginia told Christian News Network that the performance by James Boster, a professor of anthropology, was "very unbecoming."

"He asked me if I had accepted Darwin as my lord and savior," Karns said. "He was very demonstrative."

"As I was pointing to Christ," Smith said, "I was talking about the sin nature -- I said, ‘There’s probably some people out there—maybe even professors -- who think they descended from monkeys." At that point, Boster "jumped off the ground and came running over and basically started screaming, 'I did not come from a monkey! I came from an ape!'"

Boster then began to address the crowd in the very manner that campus preachers normally do. "He started to address the students as 'My brothers and sisters of Darwin,'" Karns said.

On the video -- posted below -- Boster can be heard imploring students "to join me in saying 'Praise Darwin,'" and instructing them to "feel your spiritual kinship not just with other humans, but also with your fellow mammals."

“We are all bonded together in that great spiritual web,” he said. “The divine saturates nature the way that gravy saturates cornbread.”

Boster also said that he was going to conduct "open-air Darwinism" to combat what he believes to be the pernicious effect of campus preaching.

The University of Connecticut issued a statement on Wednesday saying that "[e]veryone has the right to exercise free speech on our campuses. At the same time, we expect our faculty to act in a way that promotes civil discourse and to express themselves respectfully. The use of abusive language and a confrontational posture are inconsistent with UConn’s values."

Watch a video of Dr. James Boster mockingly "engaging" with the preachers below.