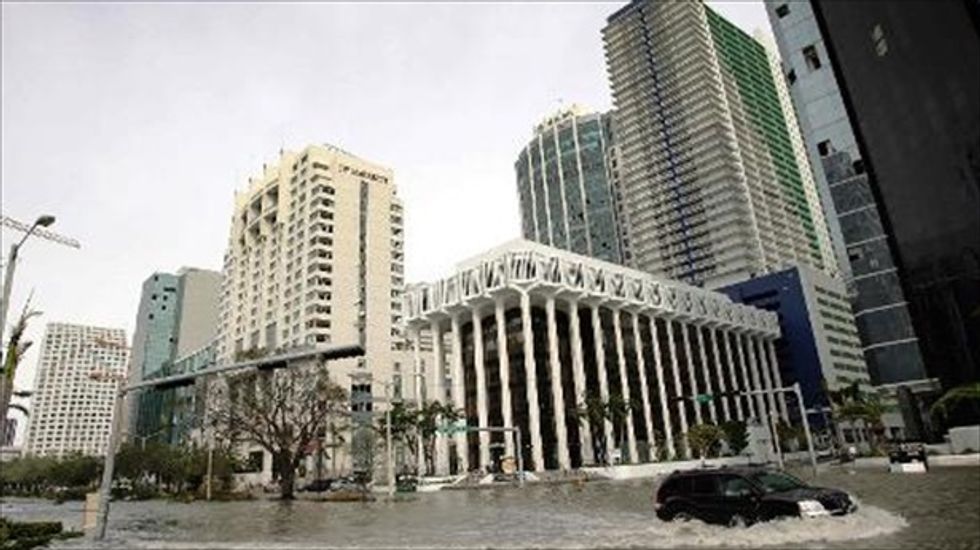 A car makes its way down a flooded avenue in Miami, Florida on Oct. 24, 2005 hours after hurricane Wilma swept through the area [AFP]

Warm sunshine and sandy beaches make south Florida and its crown city, Miami, a haven for tourists, but the area is increasingly endangered by sea level rise, experts said Tuesday.

The perils for Miami are particularly concerning because it has the most assets at stake in the world in terms of assets like homes, beachfront hotels and businesses, according to the World Resources Institute, a global research firm.

Not only is there $14.7 billion in beachfront property, but Miami is also home to the world's fourth largest population of people vulnerable to sea level rise, the WRI said.

Nearly 20 million people live in the entire state of Florida, and about three quarters live on the coast, said Nelson.

The waters around south Florida are rising fast. The Florida coast has already seen 12 inches (30 centimeters) of sea rise since 1870.

"We are on this massive substrate of limestone and coquina rock which is porous and infused by water," Nelson said at the hearing, held on the 44th anniversary of Earth Day.

"You could put up a dyke but it is not going to do any good," he added, describing the land beneath Florida as "like Swiss cheese."

"So we have to come up with new, innovative kinds of solutions," said Nelson, a Democratic senator who was born in Miami.

The mayor of Miami Beach, Philip Levine, said residents are commonly seen wading through knee-deep waters to get to their homes and businesses during high tides and floods.

"This reality is not acceptable and it is getting worse," said Levine.

Officials are investigating the use of tidal control valves and new water pumps to improve drainage, with three pumps planned for installation before October's high tides, Levine said.

"We are projecting the cost of being anywhere from three and four hundred million dollars," he said.

Discussions are also under way on urban designs and city plans that could better equip the area for rising sea levels, he said.

"What does all of this mean to Florida? By the end of the century the intensity of hurricanes, including rainfall near the centers of the hurricanes, may increase," Sellers said.

"Rising sea levels and coastal development will likely increase the impact of hurricanes and other coastal storms on those coastal communities and infrastructure."

Fred Bloetcher, a professor of engineering at Florida Atlantic University, said sea level rise is a present threat to "nearly six million Floridians, their economy and lifestyle, 3.7 trillion dollars in property in southeast Florida alone and a $260 billion annual economy."

"Presently I know of no insurance or reinsurance company that directly includes the risk of climate change," she told the hearing.

"And that is because our product is typically contracted on an annual basis, and in that time period the impact of any climate changes -- including sea level rise -- are too small and insignificant and without scientific consensus to responsibly include in our model and approach."

Despite the risks, tourism continues to boom in Florida.

Last year also marked the first time in history that more visitors came from foreign countries than from the United States, he said.