Rise of the pterodactyls becomes clearer with discovery of China's 'Krytopdrakon' 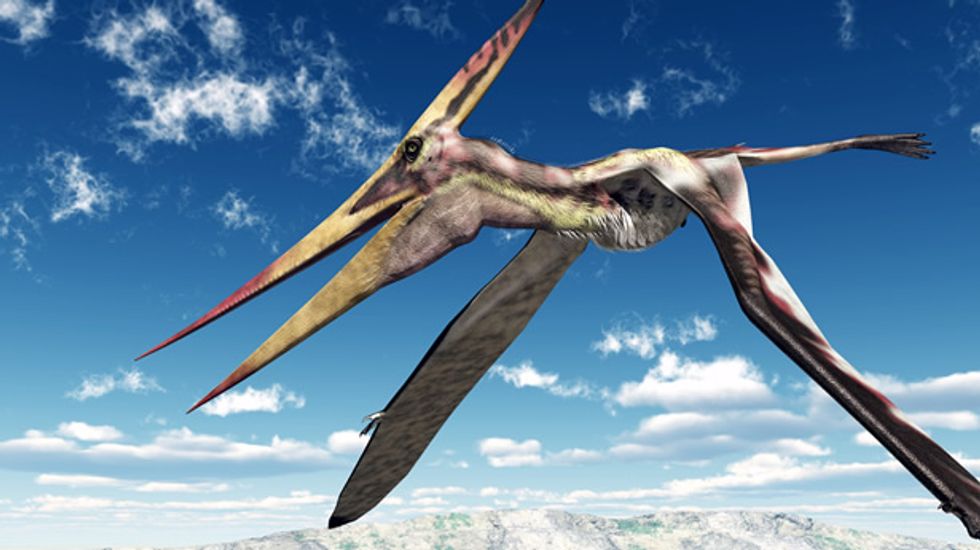 Scientists working in China believe they have found the earliest example of a pterosaur, the group of flying reptiles that became extinct over 66 million years ago.

Brian Andres of the University of South Florida, James Clark of George Washington University, and Xing Xu of the Chinese Academy of Science claim to have found, as the title of their paper indicates, "The Earliest Pterodactyloid and the Origin of the Group."

They named the new species Kryptodrakon progenitor -- krypto is Latin for "hidden," drakon for "dragon" -- after the movie Crouching Tiger, Hidden Dragon, which was filmed in the desert in which the fossils were found. Progenitor is a reference to it being the oldest example of a pterosaur that's been found. Kryptodrakon is five million years older than any other known member of the pterosaur family tree.

The fossilized remains were found in what is called a "dinosaur death pit" in the remote Chinese locale known as the Shishiugou Formation. It is so called because the ancient quicksand there trapped so many dinosaurs and preserved their fossils. Initially, the Kryptodrakon's bones were identified as belonging to a two-legged dinosaur known as a theropod, but eventually biologist James Clark realized that he was looking at a rare example of an early, tiny pterosaur.

The elongated "pinky finger" of pterosaurs is usually so fragile that it is not preserved in the fossil record. "In primitive pterosaurs, it is one of the shortest and least variable bones in the wing, but in pterodactyloids it is quite elongated," co-author Brian Andres told Reuters.

But in the case of this particular Kryptodrakon, the quicksand in which it died preserved the fragile digit.

Just as important as the fossil itself, the co-authors contend, is where it was found. Pterosaur fossils are normally discovered in ancient marine environments, i.e. on or near the shores of ancient oceans. This fossil, however, was found in a part of China that would have been dominated by rivers, but far from the ocean. This suggests that the first large animals to take flight may have done so far inland, in a terrestrial environment.