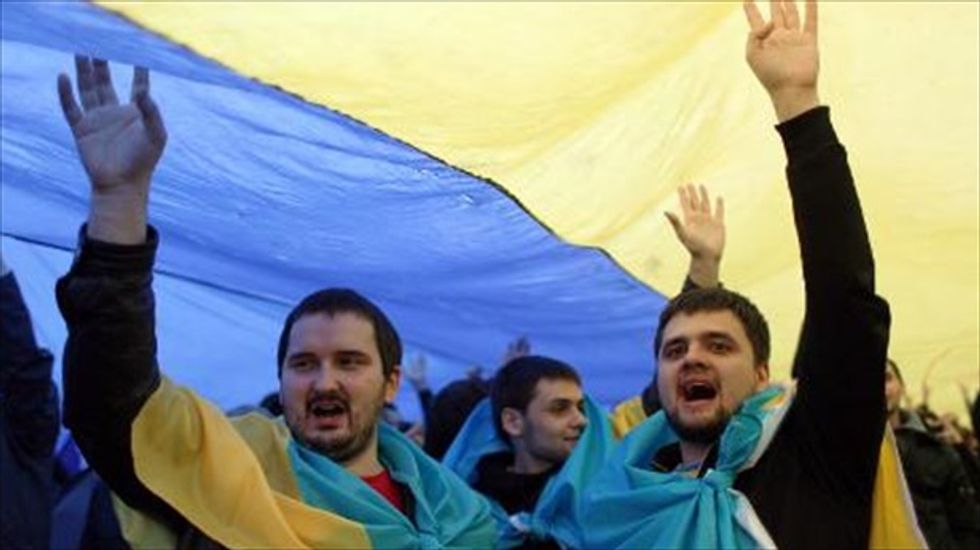 Ukrainian people hold up a large national flag and shout slogans as they take part in a nationalist and pro-unity rally in the eastern city of Donetsk on April 17, 2014 [AFP]

Russia, Ukraine and the West reached a surprise deal Thursday to try to ease the Ukrainian crisis, in a glimmer of hope for the former Soviet republic that risks splitting in two.

The agreement laid out concrete steps to "restore security for all citizens" and crucially urged "all illegal armed groups" to disarm and vacate "seized buildings".

While not spelt out explicitly, the groups likely referred to pro-Kremlin separatists who have taken over parts of Ukraine's restive southeast.

The agreement marked a sharp change from the tone taken by Russian President Vladimir Putin earlier in the day, when he left the door open for armed intervention in Ukraine.

A ban by Kiev on all Russian males aged 16 to 60 from entering Ukrainian territory had also ratcheted up the pressure, with Russia's Foreign Minister Sergei Lavrov calling the measure "disgusting".

Warning that Ukraine was plunging into the "abyss" just hours after three separatists were killed in a gunbattle with troops in eastern Ukraine, Putin stressed earlier Thursday he hoped not to have to use his "right" to send Russian troops into its western neighbour.

"I very much hope that I am not obliged to use this right and that through political and diplomatic means we can solve all the acute problems in Ukraine," he said in his annual televised phone-in with the nation, in a thinly-veiled threat.

In a sign that the new, untested leaders in Kiev were losing control, a much-hyped military operation launched against separatists earlier this week failed spectactularly, with militants blocking troops sent to oust them and even seizing six of their armoured vehicles.

Washington and Kiev have accused Russia of supporting these insurgents, who have been behaving in very similar ways to militants who seized public buildings in the Crimean peninsula before it was annexed by Moscow last month.

But Moscow has categorically denied links to the gunmen and blamed Ukraine's interim leaders -- brought to power in February after the ouster of pro-Kremlin president Viktor Yanukovych -- of bringing the country close to civil war.

The upper house of parliament on March 1 authorised the Russian leader to send troops into Ukraine after Yanukovych's ouster, and Moscow later went on to annex Ukraine's Russian-speaking Crimean peninsula.

Russia has raised further concern by massing tens of thousands of troops at the border, but in an apparent bid to reassure his counterparts in Geneva, Lavrov said Russia had "no desire" to send troops into Ukraine.

"Ukraine has shown admirable, sometimes I think even remarkable restraint, in the face of considerable challenge," US Secretary of State John Kerry told reporters after hammering out the deal in Geneva with Lavrov, Ukraine's Andriy Deshchytsya and EU foreign policy chief Catherine Ashton.

The four-parties' agreement also called on protesters to be granted an amnesty if they vacated occupied buildings and surrendered weapons.

It also added that a dialogue that included all Ukrainians regions should be launched -- apparently addressing Moscow's concerns that the rights of Russian speakers be assured.

"I can see why they (Russians) did this as they felt that the sanctions were quite close to being imposed, so they had to take a step back," Kiev-based political scientist Andreas Umland said.

The United States and European Union have already imposed punitive sanctions on key Russian and Ukrainian political and business officials, including members of Putin's inner circle.

Kerry warned Russia that if there was no progress on de-escalating the crisis in Ukraine, "there will be additional sanctions, additional costs".

No timeline was given for the implementation of the agreement, but Ukraine's foreign minister said it should begin "in the coming days".

He added that the West is "not giving up" on Crimea, "but we did not come (to Geneva) to talk about" the peninsula.

The agreement also called on all sides to reject extremism in all shapes.

Kerry described as "grotesque" pamphlets which were sent to Jews in east Ukraine's main city, ordering them to register.

"In the year 2014, after all of the miles travelled and all of the journey of history, this is not just intolerable, it's grotesque. It is beyond unacceptable," he said.

The incident has been dismissed by the local chief rabbi as nothing more than "provocation".

Separately, the European Union announced Thursday it had agreed to hold talks with Russia on its gas supplies to Europe through Ukraine, warning Moscow its reliability as an energy source was at stake.

The announcement came even as Putin ramped up pressure on Ukraine by setting a one-month deadline for Kiev to settle its debt for gas imports from Russia.