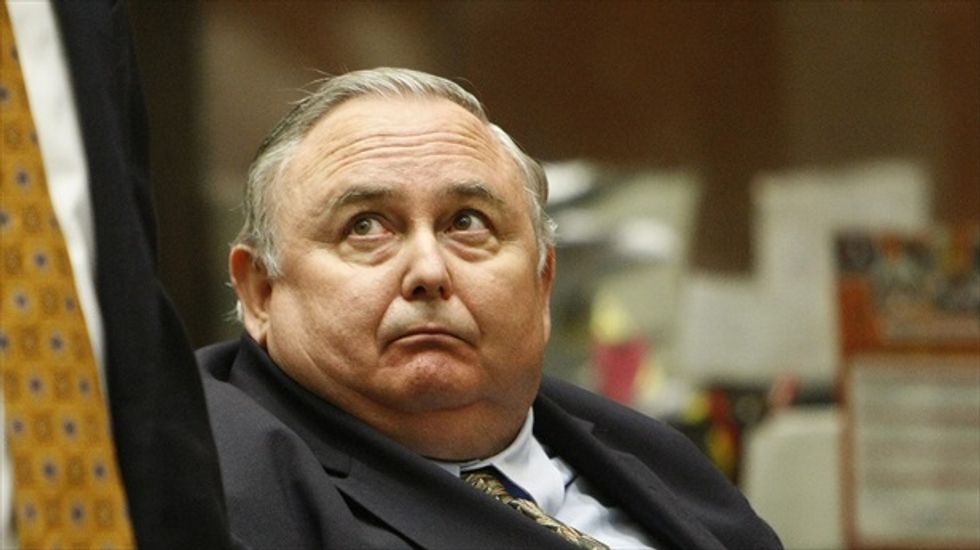 LOS ANGELES (Reuters) - The former city administrator of Bell, California, who became a symbol of local government corruption when news surfaced of his annual salary of about $800,000, was sentenced on Wednesday to 12 years in prison, officials said.

An apologetic Robert Rizzo, 60, who pleaded guilty last year to 69 state criminal counts - from perjury to misappropriation of public funds - also was ordered to pay $8.8 million in restitution to the city, said Jane Robison, a spokeswoman for the Los Angeles District Attorney's Office.

He will serve the sentence concurrent with a 33-month federal sentence imposed earlier in the week for a tax-fraud scheme designed to conceal part of his large, publicly funded income, Los Angeles Superior Court Judge Kathleen Kennedy ruled.

The revelations of the inflated salaries for Rizzo and other officials in Bell, a working-class suburb of Los Angeles, fueled statewide debate over public pay.

Rizzo apologized in court on Wednesday, recounting how his approach to managing the city changed in the years after he was hired in the early 1990s.

"For the first 12 years, we ran a very good, tight ship, we didn't have any issues and beginning in the 13th year I breached the public's confidence by starting to look at the position more towards myself than towards the community," he said, according to video news footage.

"I am very, very sorry for that," Rizzo said. "I apologize for that, if I could go back and make changes, I would."

Aside from collecting a salary roughly twice that of President Barack Obama, Rizzo took in hundreds of thousands of dollars a year in unused vacation time, prosecutors said.

In federal court on Monday, Rizzo was sentenced to 33 months in prison after he pleaded guilty to conspiracy and filing a false tax return with the Internal Revenue Service. He will remain free until he turns himself in to federal prison officials in May.

Last week, Rizzo's aide Angela Spaccia was sentenced to more than 11 years in prison after she was convicted in December of 11 felony counts, including misappropriation of public funds and conflict of interest for writing her own contracts for the city.

Rizzo and Spaccia had created an $8 million pension plan for themselves to share when they would have retired, Robison said.