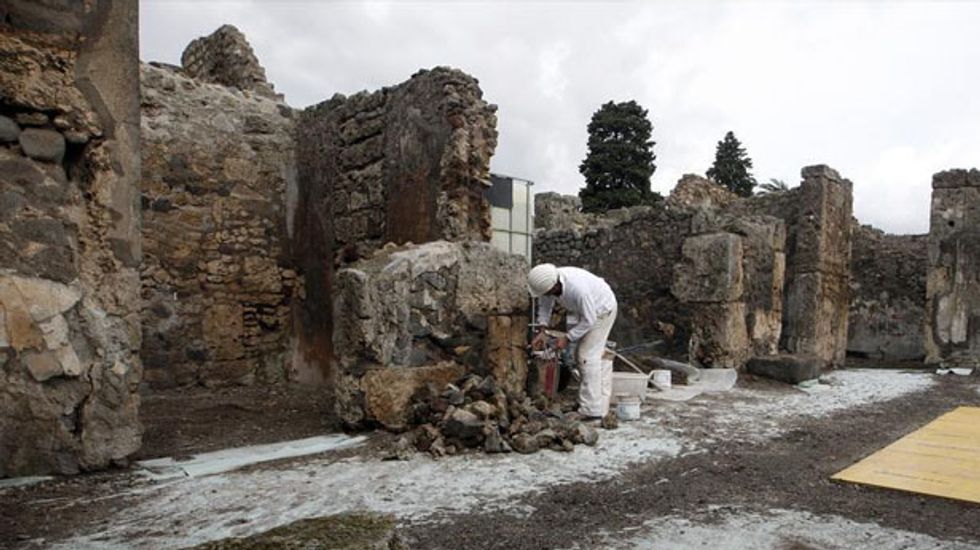 ROME (Reuters) - The ruins of ancient Pompeii will be monitored by satellites and sensors under an agreement with Italian defense and technology group Finmeccanica to try to stop the UNESCO world heritage site from crumbling.

The state-controlled group will help train staff and donate its technology for free for three years in an investment worth up to 2 million euros ($2.75 million), after which the equipment will be left to the restoration project.

Finmeccanica will train staff to use high-tech monitoring tools that should flag shifts in terrain in the 1,500 buildings of Pompeii, so that archaeologists can quickly intervene to prevent collapses.

Soil movements, a major risk to the ruins especially during bad weather, will be monitored through high resolution images captured by the COSMO-SkyMed group of satellites, controlled by the Italian Space Agency, Finmeccanica said.

Technicians will build up a digital archive of the most important sites in Pompeii through hyperspectral imaging, which can capture the composition of different materials by measuring their electromagnetic radiation.

Site security will be able to access the information through a smartphone app, and vandalism or damage to the ruins will set off alarms.

The partnership with Finmeccanica is the latest of several examples in which private companies have stepped in to fund restorations of Italy's fabled cultural heritage to make up for a dearth of public funds.

Luxury shoemaker Tod's is helping to restore the Colosseum, jeweller Bulgari the Spanish Steps, and fashion house Fendi the Trevi Fountain - all in Rome.

"I invite other private groups to come forward and not use the excuse that there are too many bureaucratic hurdles," Culture Minister Dario Franceschini said on Thursday. "We are here, there are no more alibis."

Italy's most popular tourist attraction after the Colosseum and Palatine Hill, which attracted 2.5 million visitors in 2013, Pompeii was preserved by the eruption of Vesuvius almost 2,000 years ago and was rediscovered in the 18th century, but has become a symbol of decades of mismanagement of Italy's heritage.

The restoration hit delays amid disagreement over who should be named to lead the works, and on Thursday Franceschini said that the project's deputy director, Fabrizio Magani, would be replaced. He had been named to the post in December. ($1 = 0.7263 Euros)