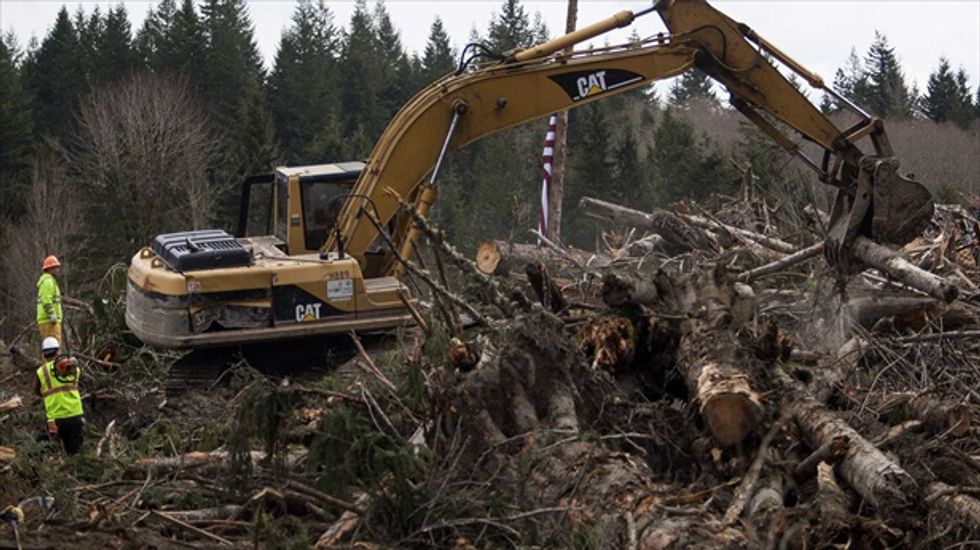 SEATTLE (Reuters) - More than a month after a massive mudslide buried much of a small Washington state community, killing 41 people, authorities said on Monday they had suspended the active search for more bodies under half a square mile of dirt and debris.

Snohomish County Sheriff Ty Trenary said that with the remains of two people still presumably buried under the rubble, the so-called "active search" had been halted because deep pools of water and adverse weather had created dangerous conditions.

"Mother nature is what's stopping us," Trenary said at a morning press conference. "It's time to take a pause and take a break."

The sheriff said the two remaining bodies may never be recovered, but he has not lost hope. So far, Snohomomish County officials have identified all 41 recovered bodies. Rescuers saved 11 people on the day of the mudslide.

As debris removal begins near the small community of Oso, officials said passive searching will continue while workers sift through the debris field to recover personal property.

Trenary said the search effort has diminished significantly. At the height of the recovery effort, more than 1,000 volunteers were combing through the barren landscape where three dozen homes once stood.

County officials said the area remains dangerous, and crews will continue to monitor for mudslide activity.

Snohomish County Executive John Lovick said the county and state have formed a task force to investigate what the county knew about mudslide risks in the area and the effectiveness of the recovery effort.

"There will be a lot of questions, and we hope to have a lot of answers," he said. "It is important to the families that we understand what happened."

A long-term recovery task force formed by the county will focus on supporting repairs to the destroyed section of state highway and will open two long-term recovery centers to serve as a "one stop shop" for victims families and survivors.

Last week, Snohomish County officials delayed a decision on a proposed ban on construction in landslide-prone areas over concerns it would hamper the re-building effort.

U.S. President Barack Obama visited Oso last Tuesday to meet with families of victims and to survey the mudslide aftermath.

[Image: Rescue workers continue to search for human remains in a debris field left by a mudslide in Oso, Washington, April 3, 2014. By Max Whittaker for Reuters.]