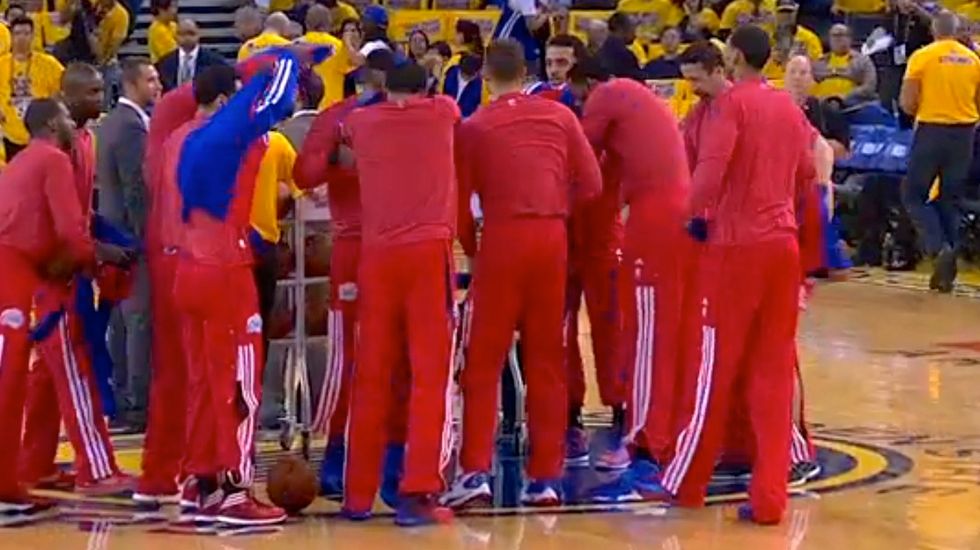 While I'm definitely glad to see Donald Sterling pay for his viciously racist views, I have to agree with many commentators that it's yet another example of the troubling trend of how what people say tends to get elevated over what they do when it comes to racist or sexist stuff. In Sterling's case, that he's a racist is no surprise, since he ruined a bunch of people's actual lives with his racist housing discrimination practices. I'm not trying to minimize the racist emotional abuse he apparently thought he was buying the right to inflict on his mistress (as opposed to a clean "she pretends to like fucking you, you buy her stuff" arrangement), but the point is it's deeply uncomfortable to me that a few minutes of tape seems to count for more than countless lives ruined by his housing discrimination.

That people don't intend to learn anything from this is evident to me in this story about how the Clippers players and coach are supporting Rochelle Sterling, Donald Sterling's wife:

But in the wake of the NBA's punishment, Shelly Sterling watched the game from a luxury suite. ESPN reported that she was flanked by a "handful of bodyguards" and exited the Staples Center immediately after the game ended.

Clippers coach Doc Rivers said he gave his blessing when she asked if it would be appropriate to attend the game.

"It's a tough one for Shelly, really," Rivers said, as quoted by ESPN. "She didn't do anything wrong. You have compassion for her. I kept hearing about the girlfriend, and Shelly's the wife. You know what I mean? I talked to her today, and she's been through as much as anyone as well. She asked if she could come, which I thought was a very nice gesture, and she just wanted the players to know that she loved them and she told me to tell them. I thought why not?"

Sorry, but this woman appears to be just as crazy-mean, misogynist, and race-obsessive as her husband. And she has done plenty wrong. Indeed, I don't see that she's much different than her husband at all. For instance, she appears to have played a major role in the housing discrimination practices he got in so much legal hot water for. She would terrorize tenants by posing as a government health inspector to invade their privacy, for instance. She also was accused of racial discrimination herself:

In a 2009 deposition, a tenant at one of the Sterling’s apartment buildings in Los Angeles County said that Rochelle Sterling called him a “black m—f—” during a discussion at the building.

In another deposition from 2009, former on-site manager Maira Oliva described Rochelle Sterling's visiting the apartment building she worked at on South Ardmore Avenue.

Oliva: “She said, ‘Oh, my God. This is so filthy. I can’t remodel my apartments the way that I want because Latinos are so filthy."

It's widely assumed that the reason the tapes of Donald Sterling were released in the first place is because Shelly Sterling is suing his mistress. The lawsuit reveals some deeply misogynist beliefs about male and female sexuality, particularly the notion that women are responsible for controlling male sexual decisions:

Sterling's partner for more than half a century, Rochelle claims that Stiviano "engages in conduct designed to target, befriend, seduce, and then entice, cajole, borrow from, cheat, and/or receive as gifts transfers of wealth from wealthy older men whom she targets for such purpose." Donald, she alleges, was a particularly big fish....

Stiviano's "feminine wiles ... overpowered the iron will of [Sterling] who is well known as one of the most shrewd businessmen in the world," Rochelle claims.

His "iron will"? I mean, c'mon. The man wanted to have a mistress, and part of what comes across on the tapes is his clear and unmistakeable belief that one of the perks of being a wealthy man is being able to buy a hot, subservient woman to dote on him and pretend she loves to fuck him. The notion that wealthy men are being exploited, against their will, by the hot women they pay to fuck them is beyond ludicrous. Shelly Sterling has self-serving reasons to promote this idea that men are helpless in the face of female sexuality, but that doesn't excuse her for peddling this ridiculous and harmful notion. (One that is often used to make excuses for male sexual violence, amongst other things.)

So, no, I don't feel sorry for her. I don't know that I care if she's banned from games or not---lots of terrible people who do terrible things go to basketball games, so why single her out?---but she is not a victim here. On the contrary, she seems like a rich old bigot, just like her husband, and one who is all too happy, just as he is, to use her wealth and power to try to impose nasty attitudes about race and gender on everyone else.