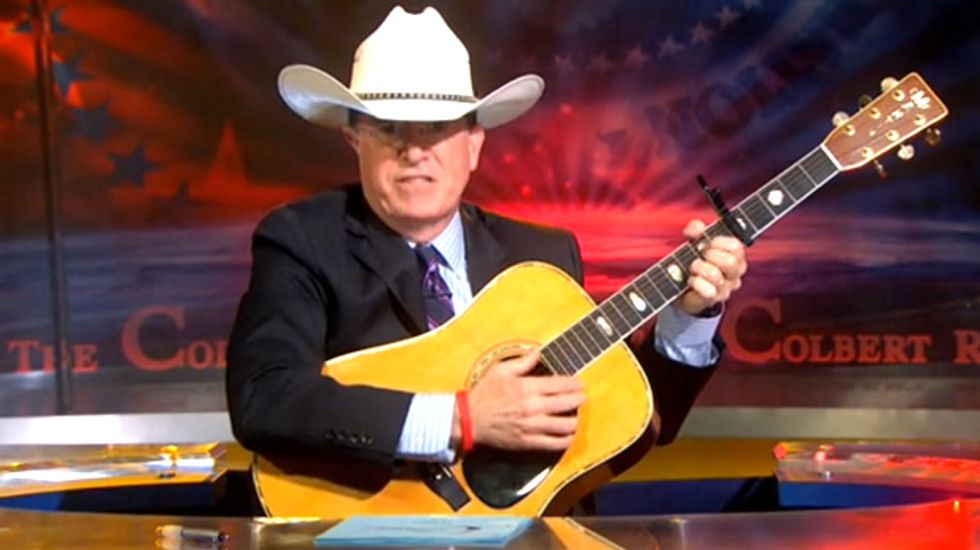 On last night's Colbert Report, Stephen Colbert discussed Cliven Bundy's relationship with Fox News's Sean Hannity, the man who "turned his ten-gallon hat all the way up to eleven."

After a montage of Hannity "welcoming back" Bundy on numerous occasions, Colbert noted that "Hannity ate up that story so hard, he should've charged him grazing fees."

"And," Colbert continued, "thanks to Sean's sympathetic coverage, armed patriots flocked to the Bundy's ranch to defend his rights."

After playing a clip of a militia man saying that if the federal government attacked, he would put the women in front so the whole world would see them dying first, Colbert assured viewers that "that's not as monstrous as it sounds -- I'm sure they were going to protect the women with a line of children."

"Now, the feds did not have the sack to shoot through a lady-line, so in that moment of victory against an encroaching federal government, Cliven Bundy became more than just a man," he said, before cutting to clips from Fox News in which Bundy was called "a folk hero," "a savior," and "a symbol of rural American standing up to the federal government."

At which point, Colbert interjected that he will call Bundy "a folk hero," and that "like every folk hero, he deserves a folk song."

You can watch the folk song Colbert penned and sang for Bundy beginning at 5:46 below.