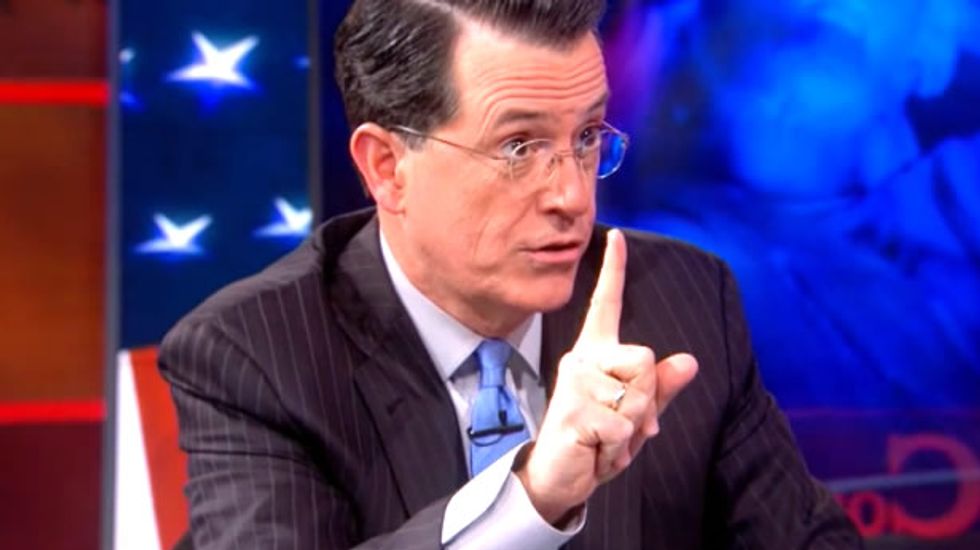 On last night's Colbert Report, Stephen Colbert praised the Supreme Court's decision in McCutcheon et al. v. Federal Election Commission, which ruled that while Congress "may regulate campaign contributions to protect against corruption or the appearance of corruption," it may not "regulate contributions simply to reduce the amount of money in politics, or restrict the political participation of some in order to enhance the relative influence of others."

Chief Justice John Roberts wrote that "[m]oney in politics may at times seem repugnant to some, but so too does much of what the First Amendment vigorously protects. If the First Amendment protects flag burning, funeral protests, and Nazi parades—despite the profound offense such spectacles cause—it surely protects political campaign speech despite popular opposition."

He went on to discuss how the Court's ruling eliminated the $123,200 limit on aggregate campaign donations, which "is great for all of us -- if by 'all of us' you mean the 591 donors nationwide who gave the maximum allowable amounts in 2012."

"Aggregate caps," Colbert continued, "unfairly limit how loud my cash could talk, under the antiquated assumption that giving politicians greasy paper bags full of money is somehow a corrupting influence."

"Justice Roberts teaches us that 'government regulation may not target the general gratitude a candidate may feel toward those who support him...or the the political access such support may afford...'Ingratiation and access...are not corruption.' In fact, those things don't even have 'the appearance of corruption.'"

"Did you get that?" Colbert asked. "Ingratiation and access are not corruption, so if you think legislators lining up to listen to megadonors like the Koch Brothers or George Soros appears corrupt, good news! John Roberts has ruled you don't think that."

Watch the entire episode for April 3, 2014 via Hulu below.