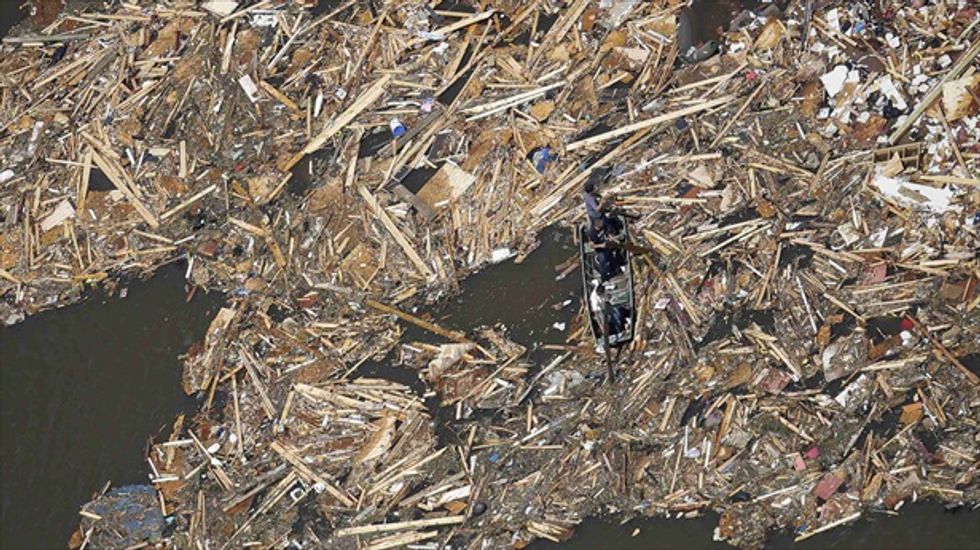 VILONIA, Arkansas (Reuters) - A ferocious storm system caused a twister in Mississippi and threatened tens of millions of people across the U.S. Southeast on Monday, a day after it spawned tornadoes that killed 16 people and tossed cars like toys in Arkansas and other states.

A tornado went through Tupelo, Mississippi in the northern part of the state at about 3 p.m. (1800 GMT), damaging hundreds of homes, downing power lines and toppling trees, Mississippi Governor Phil Bryant told CNN.

There were no immediate reports of deaths or injuries after six instances of tornadoes touching down in the state.

"It is not over. This is going to be a prolonged storm," Bryant said.

Parts of Alabama, western Georgia and Tennessee also were at risk as the storm system that produced the series of tornadoes headed east toward the Mid-Atlantic states.

Rescue workers, volunteers and victims have been sifting through the rubble in the hardest-hit state of Arkansas, looking for survivors in central Faulkner County where a tornado reduced homes to splinters, snapped power lines and mangled trees.

Arkansas Governor Mike Beebe said at least 14 people died statewide in the storm that authorities said produced the first fatalities of this year's U.S. tornado season. He previously told a news conference 16 had been killed but later said there was a mistake in calculation.

Nine of the victims came from the same street in the town of Vilonia, with a population of about 4,100, where a new intermediate school set to open in August was heavily damaged by a tractor trailer blown into its roof. A steel farm shop anchored to concrete was erased from the landscape.

Beebe told reporters of the capricious nature of tornadoes. He said a woman died when the door of her home's reinforced safe room collapsed, while a father and three daughters survived by seeking shelter in a bathtub that was flipped over in winds that leveled the house.

One person was killed in neighboring Oklahoma and another in Iowa, state authorities said.

"Everything is just leveled to the ground," Vilonia resident Matt Rothacher said. "It cut a zig-zag right through town."

Rothacher was at home with his wife and four children when the tornado passed through. While his home survived, The Valley Church where he serves as pastor was flattened.

Two elementary school-aged boys died in their home after having a pizza dinner at a friend's home, said Rothacher, who was helping provide grief counseling to the family that had sent the two boys home after they finished their meal as the storm approached.

The home that the boys left survived the tornado. The home the boys returned to did not, Rothacher said.

"These homes, these lives, won't be put back together anytime soon. It will be a long road to healing for these families."

The White House said President Barack Obama, who has been on a trip abroad, called Beebe to receive an update on the damage and to offer his condolences.

Medical officials reported at least 100 people in Arkansas were injured.

"It's so heartbreaking. I've never seen destruction like this before," U.S. Representative Tim Griffin told reporters after touring Vilonia, which was previously hit by a tornado about three years ago. "I saw a Dr. Seuss book in the rubble. I saw a Spider-Man shirt in the rubble. It just breaks your heart."

The roar of heavy equipment filled the air in Vilonia and nearby Mayflower as crews worked to clear debris off the streets or to load rubble onto trucks for removal.

The National Weather Service said the threat of tornadoes will last for several days as a strong weather system interacts with a large area of instability across the central and southern United States.

"This is a multi-day event and today is the second day of significant tornado risk and unfortunately, probably not the last," said Bill Bunting, operations chief at the National Weather Service's Storm Predictions Center in Norman, Oklahoma.

North Carolina Governor Pat McCrory declared a state of emergency for four counties where tornadoes hit on Friday and warned that more rough weather was on the way.

More than 10,000 people were without power in Arkansas on Monday morning, officials said.

The Arkansas National Guard was deployed to sift through the wreckage. Beebe declared a state of disaster for Faulkner and two other counties.

A tornado in Baxter Springs, Kansas that touched down on Sunday evening destroyed as many as 70 homes and 25 businesses and injured 34 people, of whom nine were hospitalized, state and county officials said. One person was killed in Kansas, likely due to the same storm system, officials said.

Watch a report on search and rescue efforts in Arkansas, as aired on CNN on Monday, below.

[Image: Rescue workers and volunteers search through debris in a lake, one day after nearby homes were destroyed by a tornado near Vilonia, Arkansas April 28, 2014. By Carlo Allegri for Reuters.]