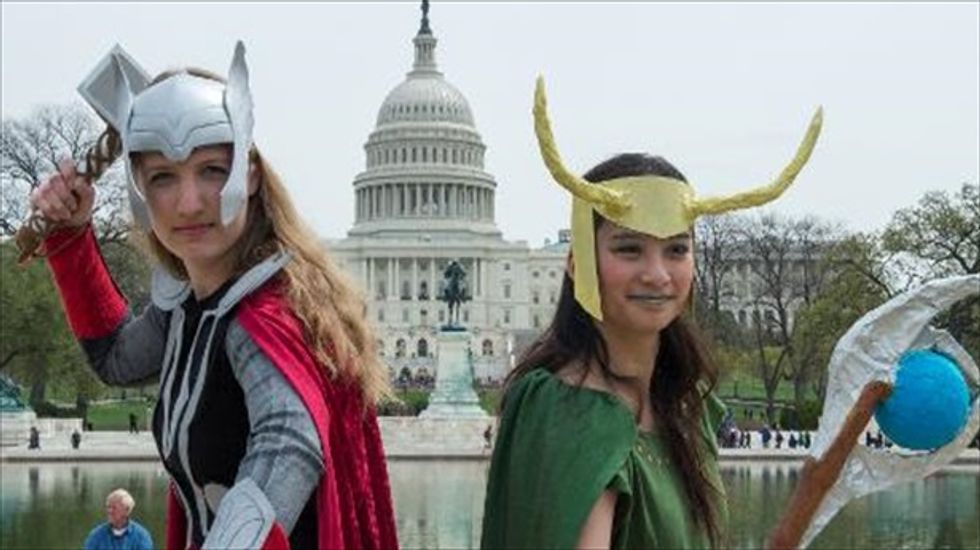 Two women wear super-hero costumes in an attempt to break the world record for the largest gathering of individuals dressed as comic-book characters, in Washington, on April 18, 2014 [AFP]

They may have super-human powers and the nerve to don spandex, but a dozen Supermen and a number of Captain Americas failed to break a world record Friday outside the U.S. Capitol.

Exactly 237 people gathered under dull skies attempting to conjure up something miraculous and smash the record for the largest gathering of individuals dressed as comic-book characters.

But they didn't even get close to the record-breaking 1,530 that hit Changzhou, China in April 2011 during an animation convention.

"I'm a fat guy, I shouldn't even be dressed this way," said "Batman" -- also known as Richard Willett, a 58-year-old retail representative.

"I'm probably the fattest guy you're ever going to see in a pair of tights, at least today," he added, showing off tights and a visibly worn cape.

Also on show were Spiderman, Wonder Woman and a variety of more or less notorious characters such as Jubilee, a sidekick of Wolverine.

The failed record attempt came before the opening of a fan convention based on comic books.

Convention organizer Ben Penrod, 31, said he was disappointed not to have set a record, but was buoyed by the growing success of "Awesome Con," which runs through Sunday in Washington.