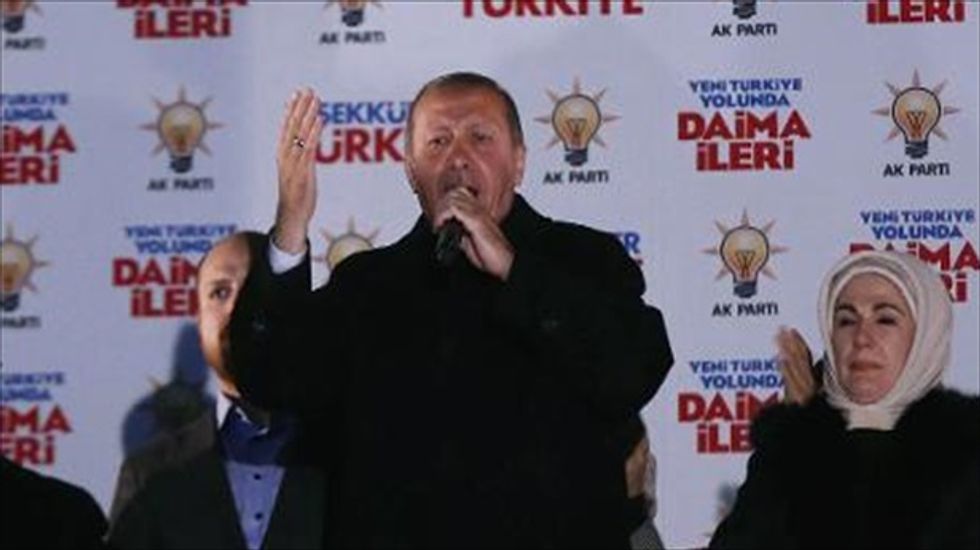 Turkish PM Recep Tayyip Erdogan (C) addresses a crowd from the balcony of the Justice and Development (AKP) Party headquarters in Ankara on March 31, 2014 [AFP]

Asked whether he would seek to become head of state in August, the first time voters will directly elect the president, Erdogan said he and incumbent Abdullah Gul "will reach a decision after negotiating this between us".

After Erdogan's 11 years in power, months of crisis and bitterly contested mayoral elections last Sunday, Turkey has been left even more polarised between a secular and mostly urban middle-class and Erdogan's loyal base in the conservative Muslim working class.

Erdogan, head of a hugely popular Islamic-rooted party, spoke bluntly Friday on a flashpoint issue in the crisis: an official block on Twitter that was overturned this week as breaching free speech by the highest court.

"I don't respect this ruling," said a defiant Erdogan, a day after Twitter went live again in Turkey.

"All our national, moral values have been put aside," he said about the social media service, which has hosted a torrent of recordings implicating Erdogan's inner circle in sleaze and corruption.

"Insults to a country's prime minister and ministers are all around."

But Washington hailed the court's decision as supporting freedom of expression.

"We also note that the Turkish government implemented the ruling yesterday to unblock Twitter," said deputy US State Department Marie Harf. "Obviously we continue to urge the government to open all social media space in Turkey."

The United States also praised a ruling by a lower court in Ankara Friday against another, ongoing ban, on the video-sharing site YouTube, imposed on March 27 after it was used to leak a recording of apparent top-level military talks on Syria.

"It is everyone's free will whether or not to buy their product," he said. "This has nothing to do with freedoms."

The festering scandal fuelled by the online leaks -- which the premier has blamed on a "foreign plot" and shadowy supporters of influential U.S.-based Islamic cleric Fetullah Gulen -- have damaged Erdogan's standing abroad.

Investor jitters have depressed stocks and the lira and threatened Erdogan's legacy, economic boom times marked by a spate of construction mega-projects.

Erdogan also handed out advice to another independent state body, the central bank, which in January hiked rates to arrest the lira's steep slide.

"The central bank should hold an extraordinary meeting to cut (interest rates)," he said.

"Investors in Turkey will be eager once interest rates are lowered. More investments will be made. We are doing quite well right now in economic terms."

Turkey's economy grew 4.0 percent last year, but analysts warn of a sharp slowdown ahead, also due to US Fed moves to slow a flood of cheap money that has poured into emerging markets.

A tense standoff continued in the capital Ankara, where the opposition claims the AKP rigged the vote to deliver its candidate a narrow victory.

Days after riot police unleashed water cannon against protesters there, the Ankara election board Friday rejected demands for a vote recount, although a national board will have the final word.

Meanwhile Erdogan left no doubt he will seek to maintain his hold on power. The big question is whether he will openly challenge Gul, or whether the two may try to swap posts.

The premier could also seek to change AKP party rules to allow him to seek a fourth term. However, Erdogan said Friday, "I am in favour of the three-term rule".

Gul has cultivated a moderate and urbane image, while ex semi-pro footballer Erdogan has adopted an often bellicose tone that has played well with his voter base.

While some commentators see a looming standoff, others believe the duo is playing a "good cop, bad cop" strategy.

They point out that Gul -- despite sometimes defying Erdogan, notably by tweeting amid the ban -- has signed all of the AKP's controversial bills into law.

Deputy Prime Minister Bulent Arinc said the local elections "have shown that the road to Cankaya (Palace) has been opened to Erdogan".

"If our prime minister wants to run as a candidate, I think Mr Gul will respect this and support his candidacy."