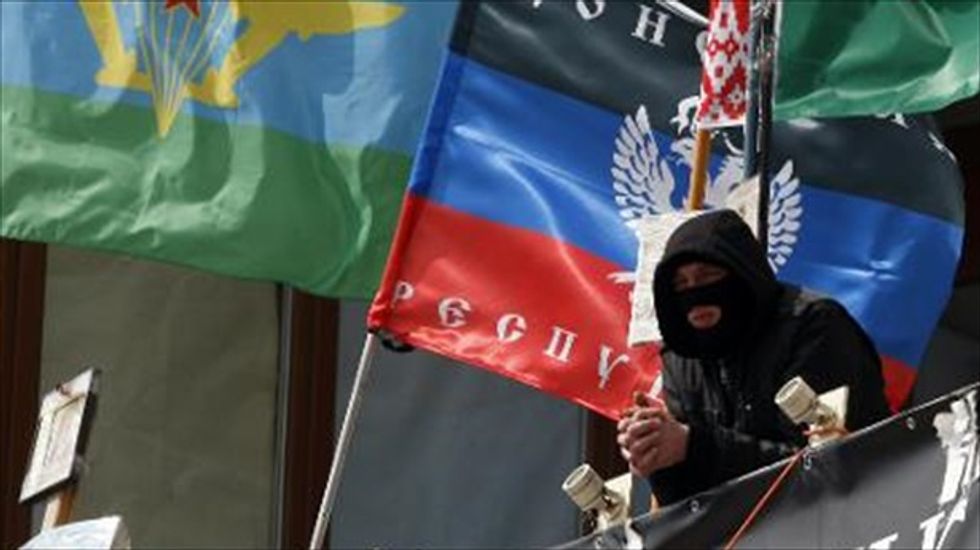 A pro-Russian activist guards a barricade outside the regional administrative building in the eastern Ukrainian city of Donetsk on April 21, 2014 [AFP]

U.S. Secretary of State John Kerry on Monday urged Russia to take "concrete steps" to implement an agreement on defusing the crisis in Ukraine.

The accord, struck last week in Geneva, was meant to lower the heat on the worst confrontation between Washington and Moscow since the Cold War, but each side has accused the other of violating it.

"He also called on Russia to assign a senior diplomat to work with the OSCE mission in eastern Ukraine, to make absolutely clear to the separatists that Russia supports the agreement and wants de-escalation.

"He also called on Russia to speak out against the seizing of journalists and other innocents as hostages," she said.

U.S. President Barack Obama has threatened to slap more sanctions on Moscow, beyond ones already imposed by the United States and the European Union targeting the inner circle of Russian President Vladimir Putin, if the pact is not implemented soon.

White House press secretary Jay Carney insisted Washington was ready to make good on its threat, warning that "if progress is not made in coming days we will impose further costs" on Russia.

Carney however declined to provide a deadline for action.

Kerry's conversation with Lavrov came as US Vice President Joe Biden began a two-day visit to Kiev in a show of support for its government.

The Geneva accord, signed by Ukraine, Russia, the United States and the EU, calls for all "illegal armed groups" in Ukraine to surrender their weapons and halt the occupation of public buildings and other sites.

But a brief Easter truce was broken on Sunday when two insurgents were killed in the rebel-held eastern Ukrainian city of Slavyansk.

Carney said the United States could not independently confirm who initiated the clash, said to have occurred at a roadblock manned by the separatists.

But he stressed Washington continued to lay blame for much of the unrest in eastern Ukraine at the feet of Kremlin-backed forces.

"We're still assessing the events of the weekend, but there's no question that the overall situation has been greatly worsened by the intervention of armed militants who have seized buildings, stockpiled weapons, blockaded roads and done so in the name of either joining Russia or being independent and being generally pro-Russia," Carney said.

"Russia has influence over the groups that have engaged in that activity... and we continue to call on Russia to use that influence to pressure those groups to disarm and to return the buildings to authorities."