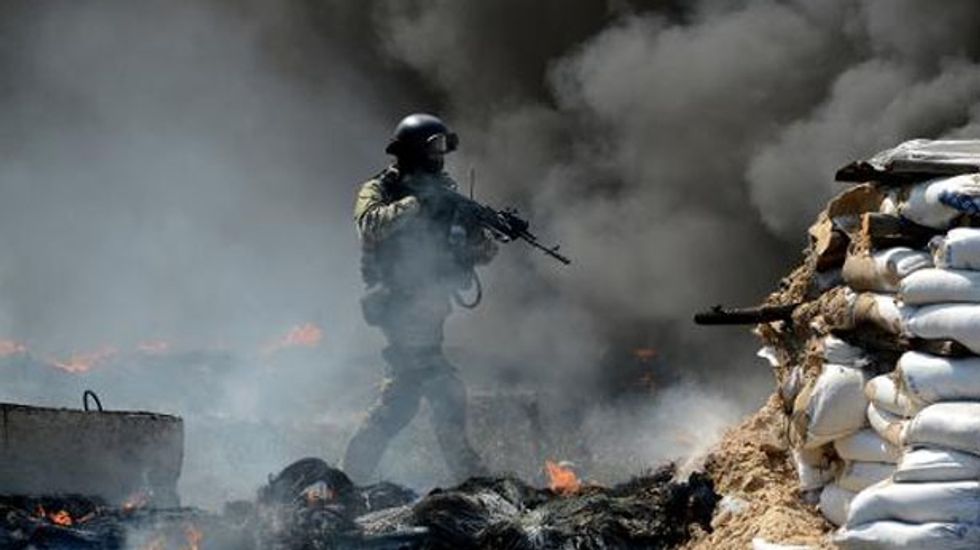 Kiev accused Moscow on Friday of seeking to trigger a "third world war" as military tensions soared in east Ukraine and US President Barack Obama led a diplomatic charge against Russia.

A rocket-propelled grenade blew up a Ukrainian military helicopter sitting on the tarmac at a base near the eastern town of Kramatorsk, officials in Kiev said. The pilot escaped but was wounded. Smoke spewed in the sky over the nearby rebel-held town.

The brazen attack by the insurgents came amid an army offensive to dislodge pro-Kremlin gunmen who are holding a string of eastern towns.

Kiev announced Friday that its forces were now seeking to "blockade" rebels inside another flashpoint town, Slavyansk, to prevent militant reinforcements arriving.

On Thursday, Ukrainian armoured vehicles and commandos had made a brief but dramatic incursion into Slavyansk, killing one 22-year-old insurgent.

Russia responded by ordering its troops massed on Ukraine's border to launch a new military exercise.

The developments prompted German Chancellor Angela Merkel to call Russian President Vladimir Putin to voice "great concern" over the situation and to urge implementation of a Geneva accord signed a week ago that was meant to defuse tensions.

Merkel's spokesman Steffen Seibert also warned of fresh sanctions against Russia, telling reporters in Berlin: "Sanctions are already in place... you have to face the facts -- in case nothing changes -- it is important to be prepared for more."

"The world hasn't forgotten the Second World War and Russia wants to start a third world war," he said.

"Russia's support for the terrorists in Ukraine constitutes an international crime and we call on the international community to unite against the Russian aggression."

US Secretary of State John Kerry said the Kremlin was making an "expensive mistake" by meddling in Ukraine, stressing that further Western sanctions on Moscow were poised to be unveiled.

"Let me be clear: if Russia continues in this direction, it will not just be a grave mistake, it will be an expensive mistake," he said.

Standard and Poor's on Friday downgraded its credit rating on Russia to one notch above junk status, suggesting Moscow was already feeling the pinch of the sanctions threat.

Russia's central bank reacted by raising its key interest rate because of "the growing inflationary risks".

Obama, on a visit to South Korea, said he would be consulting with key EU leaders later Friday.

Russian Foreign Minister Sergei Lavrov hit back by charging that Washington was "smearing" Moscow and claimed the United States wanted to "seize" Ukraine for its own "geopolitical ambitions and not the interests of the Ukrainian people".

Lavrov also complained that during private talks with his US, British and French counterparts he had come under pressure to call back Russian agents from Ukraine's east.

Ukraine's acting President Oleksandr Turchynov has vowed to push on with the "anti-terrorist" offensive to put down the rebellion in the east.

"We will not back down from the terrorist threat," Turchynov said in a televised address Thursday, telling Russia to stop interfering in Ukraine's internal affairs.

While Obama has ruled out sending US or NATO forces into Ukraine, Washington has begun deploying 600 US troops to boost NATO's defences in nearby eastern European states.

The rocketing tensions sent oil prices up for a second day Friday and stocks in Asia lower.

Russia, which supplies gas to Ukraine and to many EU countries, has said it can weather US sanctions, but warned they would trigger a tit-for-tat cycle which no-one would win.

The United States and the European Union have already targeted Putin's inner circle with visa and asset freezes and imposed sanctions on a key Russian bank.

Further punishment, though, has raised fears among some EU states that diminished Russian gas supplies could undermine a fragile European economic recovery.

Gas supply cuts, though, would also hurt Russia's economy, which is forecast to go into recession this year.

Standard and Poor's downgraded Russian debt to the lowest investment grade and kept its outlook negative, citing a risk of increased capital flight.

It said that increased isolation resulting from even tighter sanctions could lead to another downgrade.

Russia saw capital outflows in the first quarter of 2014 double from a year earlier to $50.6 billion (37 billion euros) over the uncertainty created by the Ukraine crisis and fears of greater sanctions.

Russia's economic development minister, Alexei Ulyukayev, said of the downgrade, according to the Interfax news agency: "It's clear that it is partly a politically motivated decision, and possibly it is partly a reaction to the real worsening of the macroeconomic situation in which we find ourselves."