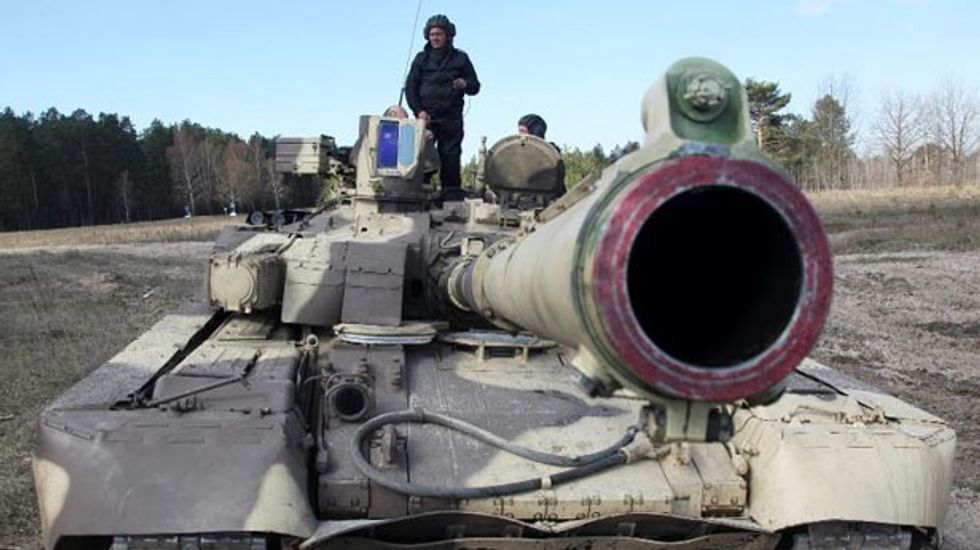 Crisis-hit Ukraine took the first step Wednesday toward granting more powers to the regions in line with Western wishes but stopped well short of creating the federation sought by Russia.

The Western-backed team unveiled its high-stakes plan under the dual pressure of tens of thousands of Russian troops massed at its border and a veiled Kremlin threat to raise the price it charges its neighbour for crucial gas deliveries for a second time in a week.

But Ukraine's new government -- having won both vital financial backing from the IMF last week and morale support from a meeting of NATO foreign ministers on Tuesday -- appeared ready to resist the Kremlin's attempts to dislodge the more Russified regions in the east of the ex-Soviet country from direct Kiev rule.

The government said it would like to eliminate the current practice under which local governors are appointed by the president and move toward an election system.

But it said nothing about granting regions the right to set their own trade policies or establish special relations with foreign states.

"The main idea behind the concept is to decentralise power in the country and substantially broaden the authority of local communities," the government said in a statement published on its website.

Moscow has sought radical constitutional reforms in Ukraine in the wake of the February overthrow of a pro-Kremlin regime whose rejection of closer ties with Europe sparked months of deadly unrest.

Russia would like to see Ukraine transformed into a federation that allows eastern regions in the vast nation of 46 million to adopt Russian as a second state language and overrule some decision coming from Kiev.

The Kremlin has argued the changes were needed because ethnic Russians had allegedly been coming under increasing attack from ultranationalist forces that helped the new leaders overthrow Kiev's Moscow-backed president.

But Washington and its EU allies fear that Russia -- having already annexed Crimea last month -- is using the federation idea as an excuse to further splinter Ukraine by granting the Kremlin veto powers over Kiev's regional policies.

US officials have instead urged Ukraine's new leaders to introduce more targeted reforms that undercut President Vladimir Putin's arguments for sending troops into the heavily Russified swathes of southeastern Ukraine.

The Ukrainian government's statement follows closely in line with US wishes by stressing that a system under which regional governors are appointed by local legislatures would be "more efficient".

The military buildup on the EU's eastern frontier follows months of economic pressure that Russia had poured on Ukraine in a seeming effort to force its leaders to reverse their firm Westward drive.

Russia's state energy giant Gazprom -- long accused of being wielded by the Kremlin as a weapon against uncooperative ex-Soviet and Eastern European states -- on Tuesday hiked the price it charges Ukraine for natural gas shipments on which its industries depend by 44 percent.

The punitive but largely expected step eliminated a price discount that Putin had extended the old government in December in reward for its decision to reject closer EU ties.

Moscow defends the further rate increase by arguing that the $100 rebate it awarded Kiev in 2010 in return for its decision to extend a lease under which the Kremlin keeps its Black Sea Fleet in Crimea no longer applied because the peninsula was now a part of Russia.

"They will try to increase the gas price by another $100," Ukrainian Prime Minister Arseniy Yatsenyuk told a business forum in Kiev. "This is the situation in which we exist."

The possibility of a further rate hike is likely to top the agenda of Thursday's talks in Moscow between the chief executives of Gazprom and the heads of Ukraine's state energy firm.

But analysts said the ultimate decision to raise the rates even further will have to come from Putin himself.

"Clearly this is a political decision which will be made by the president and which will reflect the current moves towards easing of tensions," Moscow's Macro Advisory consultant Chris Weafer said.