Venezuelan government to resume negotiations with opposition on Thursday 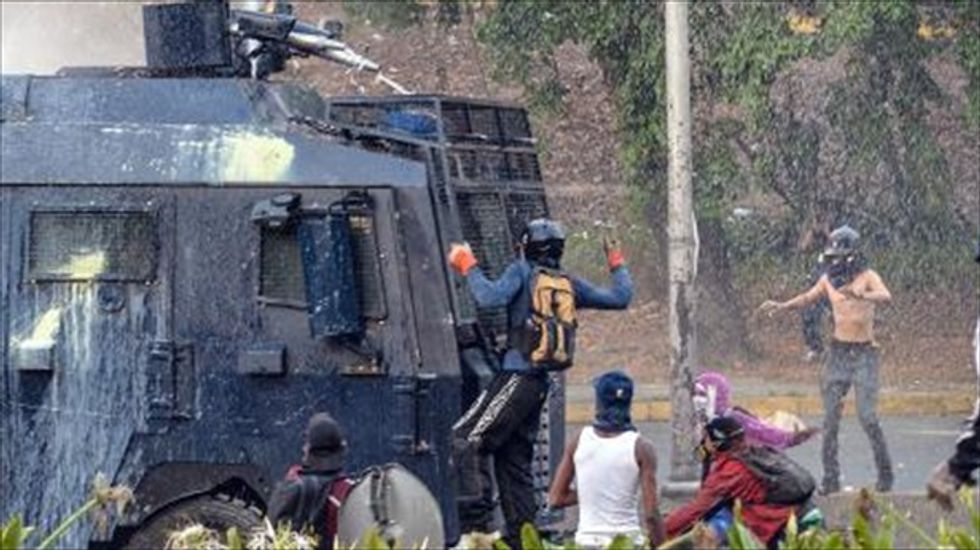 Anti-government protesters clash with the National Police in Caracas on April 21, 2014 [AFP]

"We have a date, Thursday, but we still do not have a time and place," said Ramon Guillermo Aveledo of the Democratic Unity (MUD).

It will be the fourth such meeting, this time in private, since April 7. "They have not been what one might wish for (but) some progress has been made," Aveledo said.

Anti-government protests have rattled Venezuela since February, leaving at least 41 people dead and more than 600 injured, with opposing sides trading blame for the violence.

Protesters are angry over soaring crime, shortages of basic goods and rampant inflation, among other woes in the heavily state-led socialist nation.

The elected government and the opposition held preparatory talks on April 7, which were followed by an unprecedented televised meeting between President Nicolas Maduro and some opposition leaders, including the runner-up in last year's presidential election, Henrique Capriles.

The more radical wing of the opposition, which is seeking Maduro's ouster through the street protests, has refused to join the talks.

They have called for the release of their most prominent leader, Leopoldo Lopez of the Popular Will party, who is in a jail on charges of inciting violence.

The protests first erupted on Feb. 4 in the western city of San Cristobal, where students took to the streets to denounce the country's rampant crime after the attempted rape of a young woman.

The movement spread to other cities, including Caracas.

Maduro has lashed out at the demonstrations, branding them a "fascist" U.S.-backed plot to overthrow his government.

Yet the protests do not appear to have posed a threat to Maduro's hold on the government, which has enjoyed wide support among the country's poorer sectors.