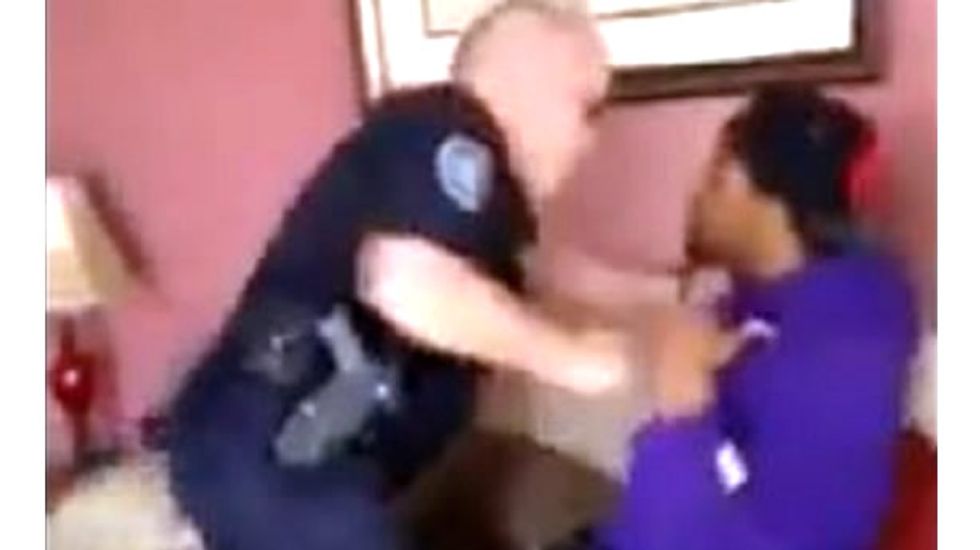 Video of a River Ridge, Louisiana man being arrested for resisting arrest went viral on Thursday.

The video shows a deputy for the Jefferson Parish Sheriff's Office taking Donrell Breaux into custody after, the deputy alleged, Breaux refused to provide the officer with proper identification. It begins shortly after the deputy announced his intention to arrest Breaux, so it is unknown whether his actions compelled the deputy to arrest him.

According to Colonel John Fortunato, spokesman for the Jefferson Parish Sheriff's Office, a neighbor of Eric Banegas told police that he was sitting on his porch with his wife and children when he overheard someone loudly using profanity. When the neighbor confronted Banegas and Breaux, who were standing on the porch, Breaux unleashed "profanity-laced sentences" at him, his wife, and his children.

At this point, the neighbor called the police, whom he also told that he smelled marijuana "in the area where Breaux was standing." He said that he felt threatened, and told police he wanted to press charges.

The deputy who responded approached Banegas and Breaux with the intention of issuing a misdemeanor summons for disturbing the peace, but decided to arrest them when he also smelled marijuana. He asked the men for their I.D.s, and Breaux said that he believed his was inside.

According to Col. Fortunato, the deputy saw the attempt to go inside the house as a refusal to present I.D., and "[a]fter he refuses to present I.D. and tries to go into the house, now [the deputy's] going to do a physical arrest as opposed to a misdemeanor summons."

Breaux admitted to the Times-Picayune that he and Banegas were on the porch using profanity, but insisted that "[i]t wasn't to the point that we were loud and disturbing people." He claimed that the neighbor was combative and also used profanity when he confronted them, and that he did threaten to call the police.

However, Breaux said, "[h]e threatens to call the police all the time about stuff in the backyard and stuff going on inside the house. Things like there's too many cars in the driveway."

"These are personal friends," Breaux continued. "I wish I had friends that I could call and have them handle personal vendettas that I have with my neighbors."

Breaux disputes the deputy's claim that he approached them with the intention of issuing a misdemeanor summons. He told the Times-Picayune that the deputy immediately told him he was under arrest. "He's grabbing my hoodie with handcuffs out. He said, 'Let me see some ID,' and grabs my wrist and says, 'You're under arrest,' at the same time," Breaux said.

All parties agree that that is when Banegas began videotaping the encounter on his phone.

On the video, the white officer can be seen forcing his way into the house. Breaux, the black man in the video, can be heard repeatedly saying, "You're scaring me."

The officer points at Banegas and tells him to "get out of here."

"But this is my house, though," Banegas responds.

"Sir, what is your name?" Breaux asks the officer.

"I'm not answering any questions," the officer replies. "You're under arrest."

According to Tulane University law professor Jancy Hoeffel, the 911 call alone was not probable cause to enter the Banegas residence. However, if the neighbor is able to convince the responding officer of a legitimate claim of criminal behavior -- in this case, disturbing the peace -- the officer can make an arrest on the spot, without a warrant.

"It's hard for a citizen to know if a lawful arrest is occurring if they don't know what they're being arrested for," Hoeffel said. The Louisiana code of criminal procedure does, however, grant citizens the right to be informed of the intention to make an arrest, the authority which grants the officer the right to make it, and the cause of it.

In the video, Breaux is asking the officer to explain the cause, but Hoeffel said that he should complied with the arrest. "You can't have citizens second-guessing whether the officer has probable cause," she said. "Cooperate now, litigate later. I admire people who stand up for their rights. At the same time, it's for their safety. In general, things only get worse if you don't cooperate."

Watch an incorrectly titled video -- it was a Jefferson Parish sheriff's deputy, not a New Orleans police officer, who made the arrest -- below.