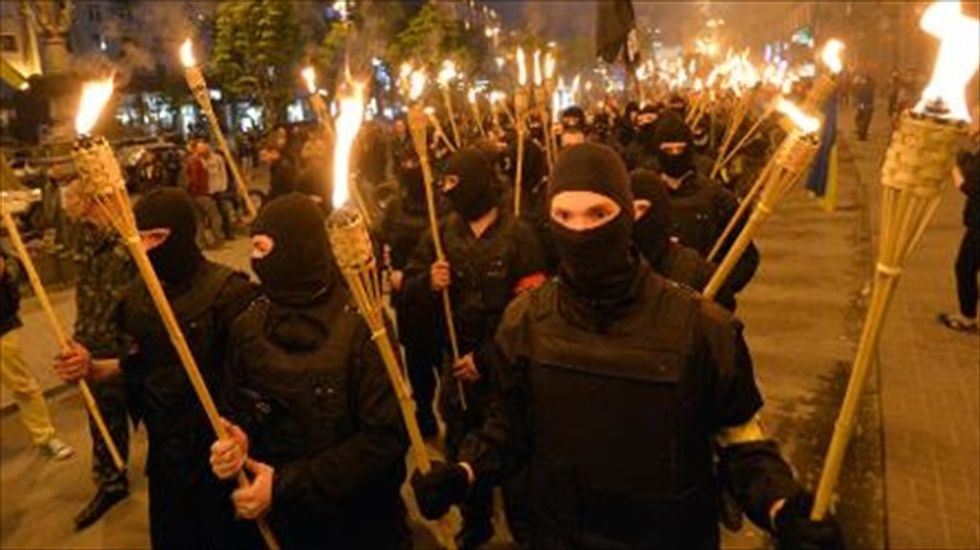 A mob spearheaded by around 30 men carrying Kalashnikov assault rifles and grenade-launchers attacked the regional police headquarters in the eastern city of Lugansk, raising the heat in the worst East-West confrontation since the Cold War.

They had earlier seized the regional prosecutors' office, tearing down the Ukrainian flag and replacing it with that of Russia, which the West blames for stoking the violence in the ex-Soviet Republic.

More than a dozen towns and cities in the east have now fallen to pro-Russian rebels, who see the Western-backed leaders in Kiev as illegitimate "fascists" and want either independence or outright accession to Russia.

"We don't want this Nazi junta that has seized power in Kiev. We don't recognise them. I want my children and grand-children to grow up in Russia," one retired engineer told AFP as he surveyed the violence in Lugansk.

As police failed to quell the violence and in some cases stood by, Ukraine's interim president Oleksandr Turchynov lashed out at what he called their "inaction" and in some case "treachery".

After hours under siege, police in Lugansk abandoned their headquarters and their arms to the pro-Russian demonstrators late Tuesday.

The officers, who had tried unsuccessfully to repel the mob with grenades and tear gas, filed out of the building unarmed after hours of negotiating over the fate of their weapons.

"They are adolescents, they're barely 18 and they're terrified," an armed man who refused to give his name told AFP.

"We are here to protect the people," he said, tapping his Kalashnikov. "We would never have been the first to shoot."

As the situation on the ground descended further into chaos, the war of words between Moscow and the West continued, with Russia saying the United States was resorting to "Iron Curtain" policies.

"If this continues, we will of course have to think about how (foreign companies) work in the Russian Federation, including in key sectors of the Russian economy such as energy," he said.

Underscoring Russian anger, Deputy Prime Minister Dmitry Rogozin's warned that "sanctions are always a boomerang which come back and painfully hit those who launch them".

U.S. moves to restrict high-tech exports to Russia appeared to cause particular fury, with Rogozin warning Washington was "exposing their astronauts on the ISS".

The International Space Station is operated jointly by Russia, the United States, Europe, Japan and Canada.

Astronauts and cosmonauts depend on Russian Soyuz rockets to ferry them between it and Earth, ever since NASA scrapped its space shuttles in 2011.

Moscow has lashed out at the European Union for "doing Washington's bidding" after the bloc included General Valery Gerasimov, chief of the general staff of the Russian armed forces and the country's deputy defence minister, on a list of 15 Russians and Ukrainians targeted by an asset freeze and travel ban.

It also vowed that Japan's decision to deny visas for 23 Russian nationals "will not be left without a response".

The E.U. and Japanese blacklists are part of a G7 sanctions assault started by Washington on Monday with measures announced against seven Russian officials and 17 companies close to Russian President Vladimir Putin.

As the E.U.'s top foreign policy official, Catherine Ashton, voiced alarm at "the downward spiral of violence and intimidation" in Ukraine, fears persisted of an imminent Russian invasion.

Putin firmly rejected charges that he was fomenting unrest in the region, saying that "there are neither Russian instructors, nor special units, nor troops there".

But NATO said there were no indications that the tens of thousands of troops massed on the Ukrainian border were pulling back, as announced by Russian Defence Minister Sergei Shoigu in a telephone conversation with his US counterpart Chuck Hagel.

Shoigu reiterated that Moscow had no plans to invade its neighbour and urged Washington to dial down its rhetoric over the crisis.

But Hagel called for an end to Russia's "destabilising influence inside Ukraine" and warned more pressure would be applied if it continued.

Hagel also asked for Moscow's help in securing the release of the seven OSCE inspectors held by pro-Russian militants in Slavyansk.

The local rebel leader in Slavyansk, Vyacheslav Ponomaryov, said "good progress" was being made in negotiations with the OSCE to free the men. But an OSCE negotiator gave a firm "no comment" to reporters.

The fresh Western sanctions are a response to Russia's perceived failure to implement an April 17 deal struck in Geneva to defuse the crisis by disarming militias and having them vacate occupied public buildings.

"Russia has so far failed to implement any part of the Geneva agreement," said British Foreign Secretary William Hague, who plans to visit Ukraine as well as Moldova and Georgia next week.

Among those targeted by the U.S. sanctions is the president of Rosneft, Russia's top petroleum company and one of the world's largest publicly traded oil companies.

The E.U. said talks with Russia and Ukraine will take place in Warsaw Friday to try to resolve a $3.5-billion gas bill Gazprom calculates Kiev owes. Putin has threatened to cut off the gas flow to Ukraine if it is not quickly paid.

The crisis has accelerated since February, when Ukraine's Kremlin-backed president Viktor Yanukovych was forced to flee after months of increasingly bloody mass street protests by pro-Western demonstrators.