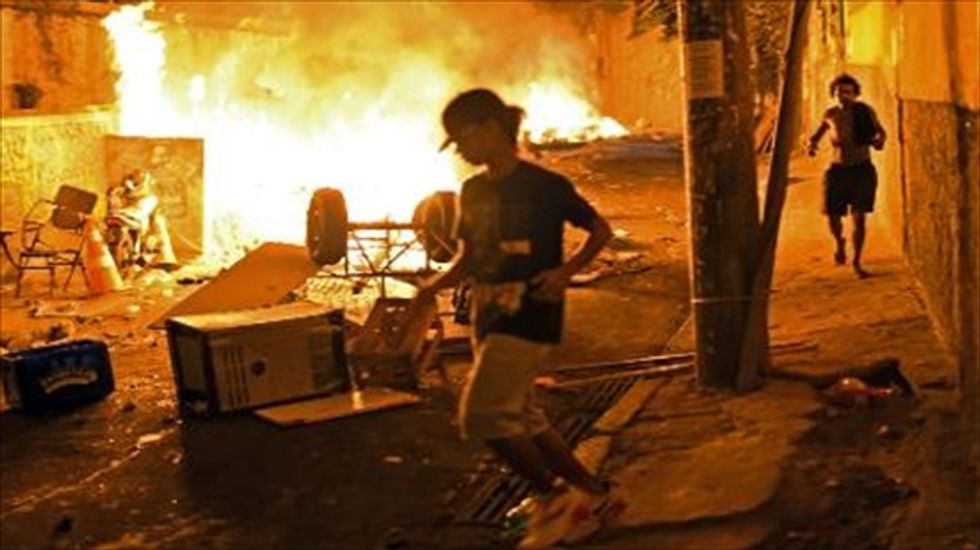 Residents run for cover during violent clashes between protestors and Brazilian Police Special Forces in a favela near Copacabana in Rio de Janeiro, Brazil on April 22, 2014 [AFP]

Violent protests broke out in Rio's landmark beachfront district, Copacabana, on Tuesday following the death of a resident, an AFP photographer said, less than two months before the World Cup.

Two main thoroughfares were closed after angry demonstrators from a slum set ablaze barricades of tires to protest the death of a dancer.

Brazilian media quoted police sources as saying Douglas Rafael da Silva Pereira, 25, had been killed after being mistaken for a drug trafficker.

Friends of the dead man alleged he was beaten to death after attempting to take refuge in a school in the community, where a Police Pacification Unit (UPP) was set up in December 2009 as part of authorities' efforts to smash organized crime ahead of June's World Cup.

"The circumstances surrounding the death of Douglas are under investigation. An on-site report indicates Douglas's injuries are compatible with a death caused by a fall," police told AFP in a short statement.

"Witnesses and residents will be called upon to give evidence" as investigations continue, the statement added.

One resident gave an account of how the trouble began.

"It started around 5.30 p.m. There was smoke everywhere, shots in the street and people racing for their homes," said a young man living just next to the slum area or favela.

"A number of police special unit trucks have just gone up into the favela. We are stuck at home -- we can't go out," he added as helicopters overflew the zone looking for a drug trafficker nicknamed "Pitbull."

Another resident said electricity supplies had been cut in the area.

Police have been cranking up efforts in recent months to clear favelas in thrall to violent criminals before the month-long World Cup kicks off June 12.

But although a huge slum "pacification" program was launched six years ago and gradually been rolled out to improve security in a city which will also host the 2016 Olympics, the gangs have been fighting back.