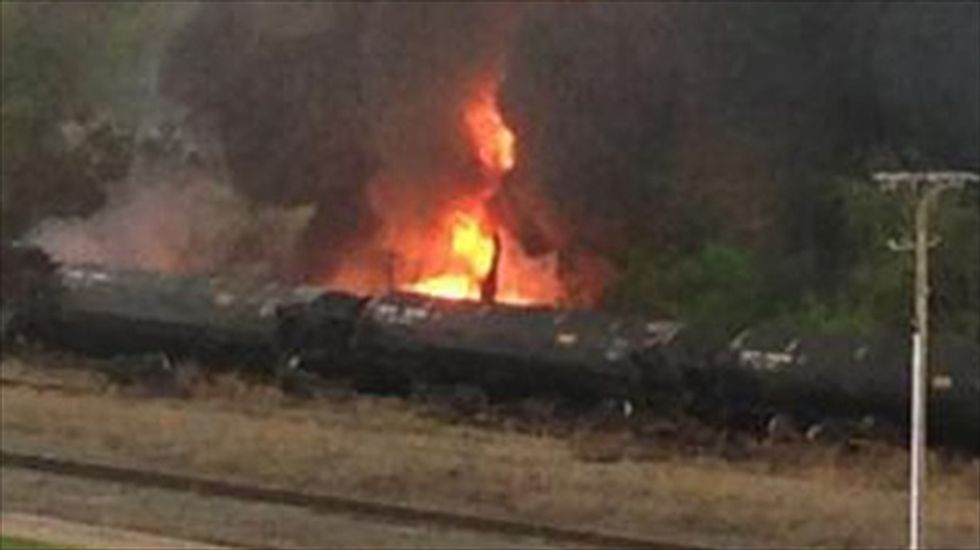 In its second oil-train accident this year, CSX said 15 cars of a train traveling from Chicago to Virginia derailed at 2:30 p.m. EDT. Fire that erupted on three of the cars was extinguished several hours later, the company said.

The three cars, each weighing 100 tons, fell down an embankment into the river and were still leaking oil on Wednesday evening, city mayor Michael Gillette told Reuters.

There were no injuries, and the nearly 350 residents who were evacuated earlier in the day were allowed to return to their homes, he said.

(Click here for a map of location of the derailment:http://link.reuters.com/mac98v)

This is the sixth fiery derailment to occur in North America since a runaway train in Lac-Megantic, Quebec, derailed and exploded, killing 47 people last July. Another CSX train carrying crude oil derailed in Philadelphia in January, nearly toppling over a bridge.

The latest incident, a short distance from office buildings in the city of 77,000, brought more calls from environmentalists for stricter regulations on shipping crude oil by rail.

CSX was sending a crew to clean up the wreckage on Wednesday evening, and city officials expected the company to remove the derailed tank cars by the end of business on Thursday.

Kathy Bedsworth, owner of the Carriage House Inn bed and breakfast in Lynchburg, the commercial hub of central Virginia, told Reuters that flames streaked as high as 60 feet.

"There was black, black, black smoke and huge billows of flames. The flames were taller than the buildings," she in a telephone interview after heading to the scene of the incident five blocks from her guest house.

National Transportation Safety Board investigators were already on site. The U.S. Department of Transportation said it was sending Federal Railroad Administration inspectors to the scene, and the Environmental Protection Agency said an official was heading there to help the state monitor air quality.

The origin of the cargo, the train's final destination and the cause of the accident were not known. One of the only oil facilities to the east of Lynchburg is a converted refinery in Yorktown, now a storage depot run by Plains All American. The company did not immediately reply to queries.

"With this event, regulators could try to expedite the process, and they'll likely err on the side of the more costly safety requirements," said Michael Cohen, vice president for research at Barclays in New York.

Residents across the country have voiced concern about oil trains, often a mile long, passing near their communities, particularly in New York and the Pacific Northwest. Derailments have also occurred in North Dakota and Alabama.

In Virginia, environmental groups including the Sierra Club and the Chesapeake Bay Foundation have opposed expansion of crude-by-rail shipments through the region to the Yorktown terminal, which can handle 140,000 barrels per day. CSX's route through populated areas like Lynchburg and its proximity to the James River have been mentioned as special concerns.

In January, CSX Chief Executive Michael Ward told analysts the company planned to boost crude-by-rail shipments by 50 percent this year. He said the Jacksonville, Florida-based railroad was working with U.S. regulators to address safety concerns in light of recent derailments and fires.