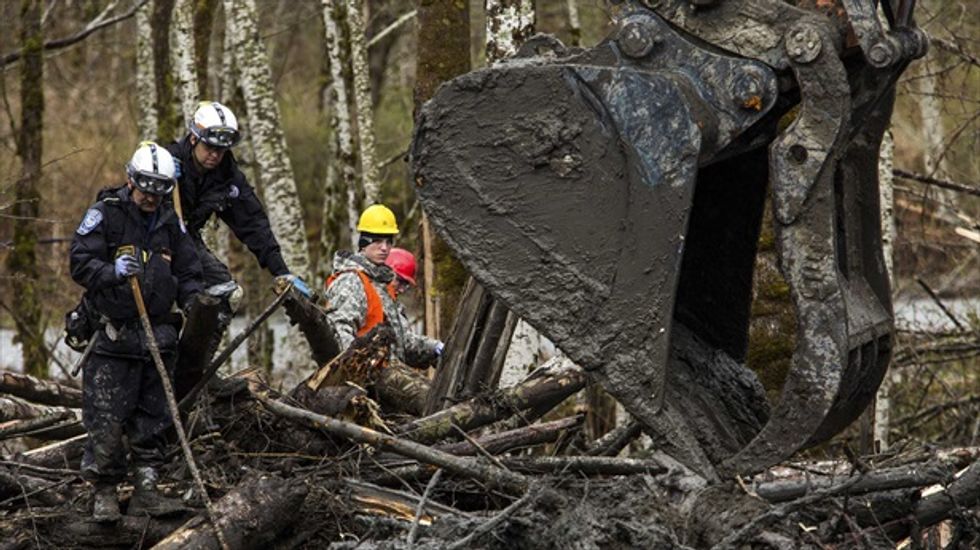 OLYMPIA, Washington (Reuters) - A Washington state county where a mudslide killed at least 41 people last month delayed a decision on Wednesday on a proposed ban on construction in landslide-prone areas over concerns it could hamper rebuilding efforts.

The five-member Snohomish County Council voted unanimously to table the issue of whether to impose a moratorium on construction within a half-mile of landslide hazard areas defined by the county, opting to take up the matter next Monday.

The decision to delay action came after Councilman Ken Klein raised concerns that the moratorium could affect rebuilding efforts of people whose homes were flooded, but not destroyed, as a result of the mudslide.

"Is our role really to protect people entirely or is it to inform them about the potential risks around the county?" Somers said. "That's a question that needs to be answered."

A rain-soaked hillside collapsed above the Stillaguamish River on March 22, unleashing a torrent of mud that swallowed up a stretch of state highway and about three dozen homes near the small community of Oso, about 55 miles northeast of Seattle.

Years before the landslide, some geologists had warned that the hill above the residential area could suffer a catastrophic collapse. Among them was Jim Miller, a geological engineer with GeoEngineers, who said his company prepared a 2001 report for a local Native American tribe that warned of a "significant risk to human lives and private property" at the slide site.

Building in the area spanned decades, but a number of the homes on a local street devastated by the mudslide were built after the report.

The Snohomish County Medical Examiner's Office said the remains of 41 victims had been recovered from the slide that buried the river valley neighborhood in the Cascade mountain foothills.

U.S. President Barack Obama visited the site on Tuesday, offering condolences to the families of victims, encouragement to rescue workers and promises of government support.

The proposed moratorium, which does not include projects already permitted, is meant to give officials time to assess risks and develop new policies as needed.

[Image: Rescuers watch carefully as an excavator combs through the large debris pile left by a mudslide in Oso, Washington, April 4, 2014. By Max Whittaker for Reuters.]