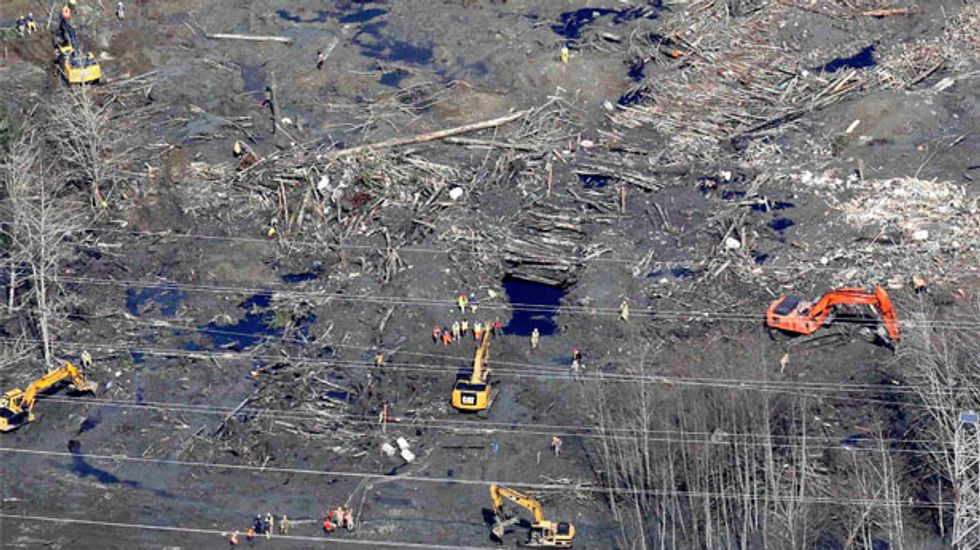 DARRINGTON, Washington (Reuters) - Survivors of a mudslide in Washington state that has left dozens dead or missing say they favor turning the area into a shrine to honor those who perished once the bulldozers clear away the destruction wrought by a vast wall of debris.

Rescue teams pressed on for an 11th day of efforts to find victims of the slide, triggered when a rain-soaked hillside collapsed above the north fork of the Stillaguamish River, northeast of Seattle.

The official death toll rose to 24 on Monday, including a 4-month-old infant and two children aged five and six. Eighteen have been identified by the medical examiner's office.

Authorities said the number of people still listed as missing had been cut to 22 from 30.

Ruth Hargrave, 67, her neighbors making up many of the dead and missing, said she could not imagine rebuilding her beloved riverside vacation house that was in the path of the slide.

"Oh my god, no," she said. "And not because of the fear of more slides. But all of that death and destruction."

Hargrave said the land, under a sea of mud up to 80 feet deep, should be treated as "hallowed ground."

It is a view shared by many living on the slide's periphery.

Jan Kittelson, 59, a truck driver living in Darrington, 10 miles to the east, said he would like to see the site turned into a shrine.

"There ought to be a marker put up there honoring the people that died," he said. "The river will cut its way through there the way it always has."

TOO SOON TO MAKE PLANS

Gary Young, a retired U.S. serviceman from Darrington, said it was up to those who own the land to decide on its use.

"It goes back to the people that was living there, that's what I think," he said. "If they want to put shrines up or whatever, that's cool. But it's their property."

Jaime Smith, spokeswoman for Washington state Governor Jay Inslee, said it was too soon to make plans for the site.

"We're still in digging-in-the-mud mode," she said. "That conversation will happen. It will involve a lot of input from the residents."

Search crews assisted by dogs have been retrieving remains four to six times a day on the eastern half of the debris pile, recovery team supervisor Steve Harris told reporters on Monday.

But authorities say that accounting for the number of dead has been complicated by the fact that the bodies are not always found intact.

No one has been pulled out alive and no signs of life have been detected since the day of the slide, when eight people were injured but survived. Officials acknowledge that some victims might end up being entombed under the mound of muck and debris covering about half a square mile (1.3 sq. km).

The torrent of mud released by the slide roared over both stream banks of the Stillaguamish river and across state Highway 530, flattening more than two dozen homes on the outskirts of the town of Oso in the foothills of the Cascade Mountains.

Scores of recovery workers picked through the mud on Monday under sunny skies, a respite from heavy rains of last week.

Forecasts for the week ahead showed a continued drying trend, "which will help crews and reduce the risk of flooding and additional slides," the county said in a statement.

The break in the weather meant less logistical work, such as pumping out water, and more searching, said Lieutenant Richard Burke of the Bellevue Fire Department, on on-site spokesman.

But about a third of the site remained buried beneath 60 to 80 feet of mud, twisted tree trunks and wreckage, making it too unstable to safely enter, he told reporters.

The greatest challenge now facing workers are areas with standing water, the county said on Monday evening. Search dogs have indicated the presence of human remains in some spots from which water was being pumped out.

About a dozen members of the NFL's Seattle Seahawks and the Seattle Sounders FC soccer team signed autographs in Darrington on Sunday, tossing footballs, kicking soccer balls and serving lasagne to about 300 children and adults.

"It's nice to have an opportunity to come out and have some fun with the kids and give them a temporary distraction from everything that's been going on," said Kenny Cooper, a forward for the Sounders.