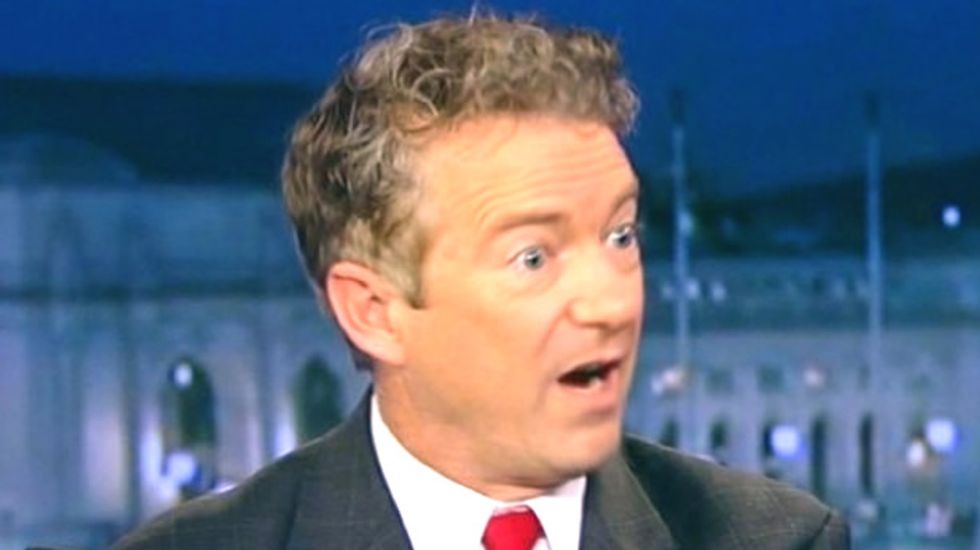 In a number videos -- recorded over a number of years -- Rand Paul can be seen praising his father, Ron Paul, for voting against the first Reagan budget:

In that video from Ron Paul's failed 2008 presidential campaign, Rand Paul argues that "[t]he deficit went through the roof under Reagan. So how long did it take Ron Paul to figure out that the guy he had liked, endorsed, campaigned for, campaigned for him? The very first [Reagan] budget. Ron Paul voted 'no' against the very first Reagan budget… Everybody loved this 'great' budget. It was a $100 billion in debt. This was three times greater than Jimmy Carter's worst deficit."

At another video from the elder Paul's failed campaign, Rand Paul argues that "we wanted Reagan to veto a budget or to have balanced budgets and he didn't do it. And it wasn't anything personal against him. I think his philosophy was good. I just don't know that he had the energy or the follow-through to get what we needed."

Corn found another video -- this one from Rand Paul's own campaign for Senate in 2009 -- in which the younger Paul argues that "[p]eople want to like Reagan. He's very likable. And what he had to say most of the time was a great message. But the deficits exploded under Reagan."

"The Democrats said," according to Paul, "'Well, the deficit's going up because you reduced the tax rates and supply side economics doesn't work.' But the interesting thing is, if you look at the numbers, tax rates went down in the early '80s, tax revenue did rise. The reason the deficits exploded is they ignored spending. Domestic spending went up at a greater clip under Reagan than it did under Carter."

After Corn published his Mother Jones article, Sen. Rand Paul's office contacted him, making the following statement on his behalf: "I have always been and continue to be a great supporter of Ronald Reagan's tax cuts and the millions of jobs they created. Clearly spending during his tenure did not lessen, but he also had to contend with Democrat majorities in Congress."