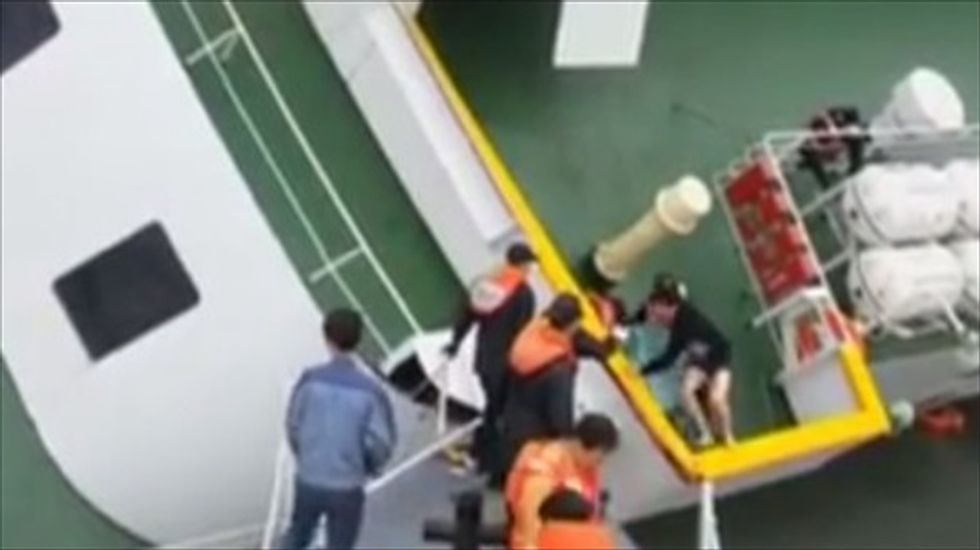 South Korea's coastguard Monday released a video showing the trouserless captain of a sinking ferry scrambling to safety as hundreds remained trapped inside -- a move expected to intensify criticism of the crew over the disaster.

The 10-minute video -- taken by rescue officials and aired on the YTN news channel -- shows 69-year-old captain Lee Joon-seok, wearing a sweater and underpants, hastily escaping from the bridge of the tilting ship before it sank on April 16.

All 15 of the surviving crew responsible for sailing the huge ferry are in custody, facing charges including negligence and abandoning passengers.

Victims' families have bitterly criticised the official response to the disaster, saying delays in accessing the submerged ship may have robbed any survivors of their last chance to make it out alive.

"Look at the captain running out of the ship without his pants on. How pathetic. Can't believe he didn't think about all the children trapped there while he rushed so quickly to save his own life," said one user.

Prosecutors Monday carried out a series of raids, including on a coastguard office, as part of their widening investigation into the disaster that left 300 dead or missing.

Divers trying to search the wreck of the upturned Sewol, which capsized with 476 people on board, were frustrated for a third straight day by atrocious weather and dangerous conditions.

Despite more than 60 hours of operations since Friday by divers trying to penetrate the flooded interior, only two more bodies have been recovered and 113 are still unaccounted for.

The confirmed death toll from one of the country's worst ever maritime disasters stood Monday at 189. Most of the missing and dead were high school students.

Strong currents have also worsened fears that bodies could drift free and be scattered.

Nets have been thrown up in seas around the ferry, but no finds have yet been reported.

Park Seung-Gi, a spokesman for the government's Joint Task Force which is co-ordinating actions, vowed Monday to redouble efforts to prevent bodies getting lost at sea.

Special teams have been set up to search underwater around the sunken vessel, as well on the sea surface, nearby islands and shores, he said.

Another official said China and Japan would be asked to contact South Korea if they find any unidentified bodies on their shores.

In deeply Confucian South Korea, the proper burial of bodies -- often in the deceased person's home town -- is considered a way to show respect for the dead and to allow their soul to rest in peace.

South Korea remains in a state of national mourning, as furious relatives and the public at large cast around for someone to blame for one of the country's worst maritime accidents.

The video released Monday showed the open decks of the ship nearly empty, as crew repeatedly instructed passengers to stay in their cabins until it became impossible for them to evacuate because the ship was tilting too much.

The delay in the crucial final hours -- when most crew members fled the ferry -- sparked outrage that many lives could have been saved if passengers had received timely instructions.

Prime Minister Chung Hong-Won tendered his resignation on Sunday, admitting he had not been up to the task of overseeing the official response. He was told by President Park Geun-Hye to stay in his post until the recovery has finished.

The probe into the sinking has expanded from the ferry operator, Chonghaejin Marine, and its affiliates, to state ship safety inspectors and even sea traffic controllers amid fury over lax safety oversight and delayed rescue efforts.

On Monday prosecutors raided the coastguard office in the southern port of Mokpo to probe allegations that it had failed to respond quickly enough to a passenger's emergency call.

The office received the call -- reportedly from a teenage boy -- a few minutes before the ship sent its first distress signal to sea traffic controllers.

During his call, the boy was bombarded with questions about the ferry's coordinates and the number of people on board.

A coastguard official later told reporters they had mistaken him for a crew member after he was transferred from another emergency call centre.

That centre in the southern province of South Jeolla is also being investigated for signs of negligence.

Watch video of the sinking ferry and the captain's escape, as posted by Reuters on Monday, below.