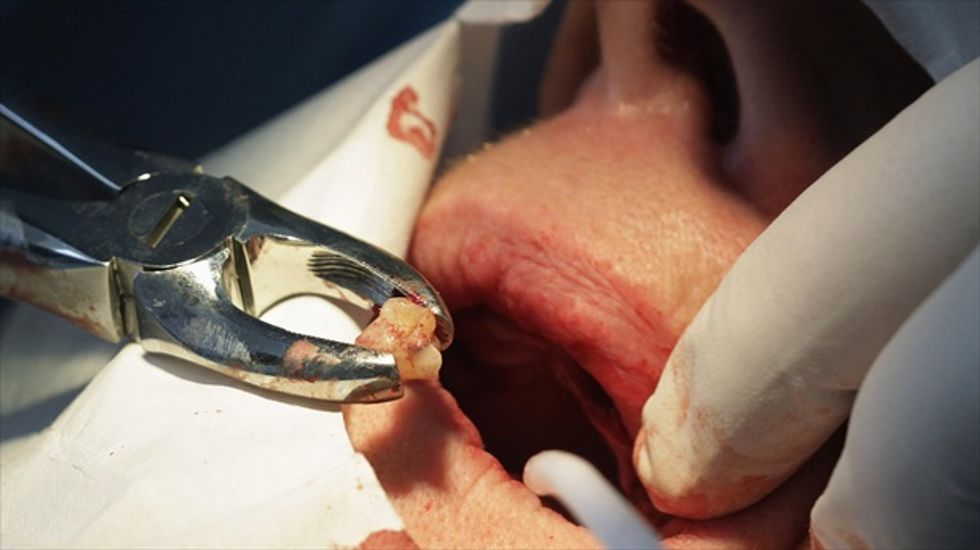 WASHINGTON (Reuters) - Scientists have come up with a bright idea - literally - to repair teeth.

And they say their concept - using laser light to entice the body's own stem cells into action - may offer enormous promise beyond just dentistry in the field of regenerative medicine.

The researchers used a low-power laser to coax dental stem cells to form dentin, the hard tissue similar to bone that makes up most of a tooth, demonstrating the process in studies involving rats and mice and using human cells in a laboratory.

They did not regenerate an entire tooth in part because the enamel part was too tricky. But merely getting dentin to grow could help alleviate the need for root canal treatment, the painful procedure to remove dead or dying nerve tissue and bacteria from inside a tooth, they said.

"I'm a dentist by training. So I think it has potential for great impact in clinical dentistry," researcher Praveen Arany of the National Institute of Dental and Craniofacial Research, part of the U.S. National Institutes of Health, said on Friday.

Arany expressed hope that human clinical trials could get approval in the near future.

"Our treatment modality does not introduce anything new to the body, and lasers are routinely used in medicine and dentistry, so the barriers to clinical translation are low," added Harvard University bioengineering professor David Mooney. "It would be a substantial advance in the field if we can regenerate teeth rather than replace them."

Using existing regeneration methods, scientists must take stem cells from the body, manipulate them in a lab and put them back into the body. This new technique more simply stimulates action in stem cells that are already in place.

Scientists had long noticed that low-level laser therapy can stimulate biological processes like rejuvenating skin and stimulating hair growth but were not sure of the mechanisms.

Arany noted the importance of finding the right laser dose, saying: "Too low doesn't work and too high causes damage." High-powered lasers are used for cutting and cauterizing.

The researchers found that laser exposure of the tooth at the right low intensity prompted certain chemically active, oxygen-containing molecules to activate a cell protein known to be involved in development, healing and immune functions.

This protein in turn directed stem cells present in tooth pulp to turn into dentin. Stem cells are master cells that are capable of transforming into various types of tissues in the body.

The researchers drilled holes in the molars of the rodents, zapped the tooth pulp with the laser and put on temporary caps, then watched as dentin formed over a period of 12 weeks.

The question is whether using this method could get other stem cells to became useful in laser-induced regenerative medicine. Arany said he was hopeful it could be used in healing wounds, regenerating cardiac tissue, dealing with inflammation issues and fixing bone damage, among other applications.

The study appears in the journal Science Translational Medicine.

(Reporting by Will Dunham; editing by Gunna Dickson)

[Image: A dentist extracts a tooth from a patient at a dental clinic in Sabanilla near San Jose in this November 1, 2012 file photo. REUTERS/Juan Carlos Ulate/Files]