Afghanistan prepares for tense runoff vote to determine next president 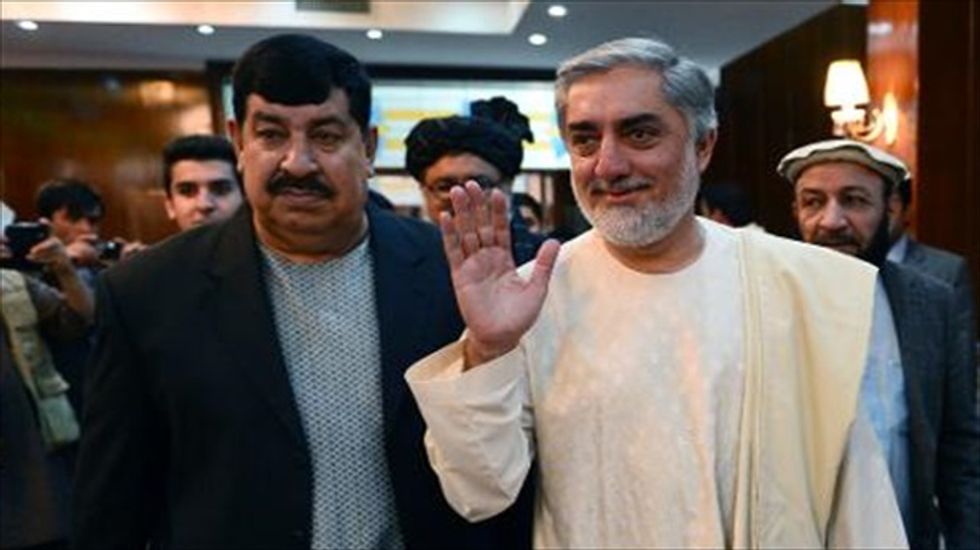 Afghanistan is due to announce the results of its first-round presidential elections on Wednesday, with former foreign minister Abdullah Abdullah and ex-World Bank economist Ashraf Ghani set to go through to a run-off vote.

Full results from the April 5 election were released late last month, but the final declaration will include the outcome of weeks of deliberation over fraud complaints.

The preliminary results showed Abdullah secured 44.9 percent of the first-round vote, with Ghani on 31.5 percent.

As none of the eight candidates appear to have gained more than 50 percent, a run-off between the two leading names is required as Afghanistan undergoes its first democratic transfer of power.

Noor Mohammad Noor, spokesman for the Independent Election Commission (IEC), said it hoped to stick with the election timeline and publish the final results on Wednesday.

"If there is to be a run-off, we will announce the date on the same day," he told AFP.

Afghan officials and Kabul-based diplomats say June 14 has been pencilled in for the head-to-head election that will choose President Hamid Karzai's successor as U.S.-led troops withdraw from Afghanistan by the end of the year.

On Monday, front-runner Abdullah received a major boost with the endorsement of third-placed Zalmai Rassoul, a close ally of Karzai.

Rassoul was seen as the favoured candidate of the outgoing president, but his own campaign gained little momentum and he took just 11.5 percent in the first round of voting.

Another costly, and potentially violent, election could be avoided by deal-making in the coming weeks, and Rassoul's support for Abdullah will increase pressure on Ghani to concede.

Karzai, who is constitutionally barred from a third term in office, has stayed publicly neutral in the election, but his elder brother Qayum Karzai dropped out before polling day and endorsed Rassoul.

"The preliminary results already show the election doesn't have a clear winner and will need a second round," Fahim Naeemi, spokesman for the Free and Fair Election Foundation of Afghanistan ( FEFA) monitoring group, said.

Of the 121 complaints lodged over the preliminary results, Abdullah submitted 115 and Ghani submitted just four.

The United Nations' mission has welcomed Afghanistan's conduct of the elections but warned officials that they must address all complaints in a transparent manner to safeguard the process.

The 2009 election, when Karzai retained power after defeating Abdullah, was marred by massive fraud in a chaotic process that shook the multinational effort to develop the country after the ousting of the Taliban regime in 2001.

The first-round election last month was hailed as a success, with turnout far better than in 2009 and the Taliban failing to launch a major attack despite threats to disrupt the vote.

A run-off vote in June -- at the height of the traditional "fighting season" -- is likely to prove more difficult for Afghanistan's stretched security forces.

The eventual winner will lead Afghanistan into a new era as U.S.-led NATO combat troops end their 13-year war against the Taliban insurgency and international aid money declines.

Sherzai and Rassoul are seen as able to deliver some support from Pashtuns, the country's largest ethnic group.

Abdullah's support is strongest in Tajik and Hazara ethnic areas due to his role as a close adviser to the late Ahmad Shah Massoud, a celebrated Tajik leader who fought the Taliban during their 1996-2001 rule.

Ghani, a Pashtun, has repeatedly said he will fight on despite falling far behind Abdullah in the first round.

Both candidates have pledged to explore peace talks with the Taliban and sign a deal with Washington that could allow up to 10,000 US troops to stay on after this year on a training and counter-terrorism mission.