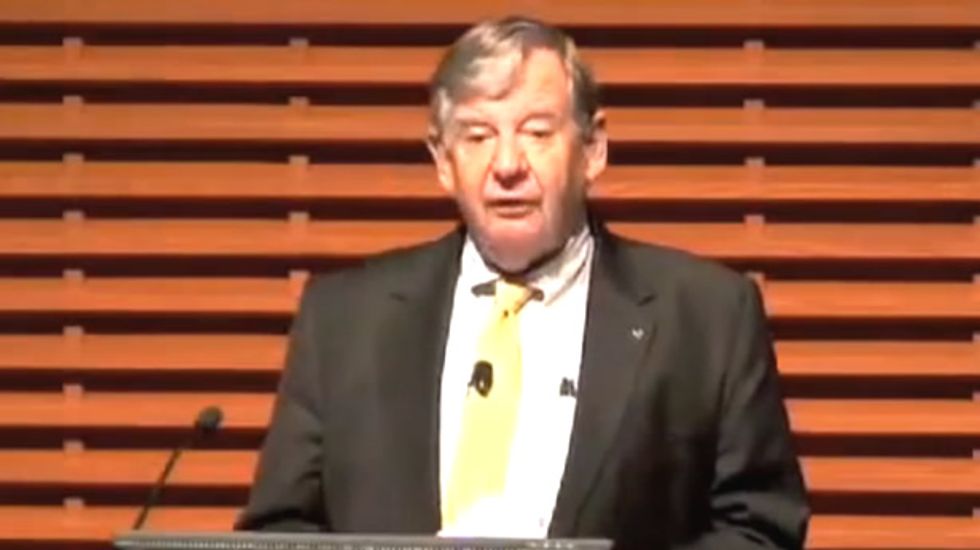 Earlier this month, a collection of students at Haverford College objected to having the former chancellor of the University of California, Berkeley give a speech during the school's commencement ceremony. On Saturday, the speaker chosen to replace him lashed out at the students, calling them "arrogant" and "immature."

In a letter, the students claimed that Robert J. Birgeneau's decision to allow the police to use force against non-violent Occupy protestors was not in keeping with the institution's Quaker heritage.

"As a community standing in solidarity with nonviolent protesters across the country, we are extremely uncomfortable honoring you," the letter stated. "To do so would be a disservice to those nonviolent protesters who were beaten and whose actions you dismissed as 'unfortunate,' as if they brought the abuse upon themselves."

The group stated that they would support his appearance if Birgeneau met nine conditions they outlined in their letter. Birgeneau refused, writing a letter that read, in its entirety:

First, I have never and will never respond to lists of demands. Second, as a longtime civil rights activist and firm supporter of nonviolence, I do not respond to untruthful, violent verbal attacks.

Haverford president Daniel H. Weiss was concerned that the students’ letter "read more like a jury issuing a verdict than as an invitation to discussion or a request for shared learning," so it surprised many when the replacement speaker, William G. Bowen, used his commencement speech as an opportunity to attack the student protestors for being "immature" and "arrogant."

"I am disappointed that those who wanted to criticize Birgeneau's handling of events at Berkeley chose to send him such an intemperate list of 'demands,'" Bowen said. "In my view, they should have encouraged him to come and engage in a genuine discussion, not to come, tail between his legs, to respond to an indictment that a self-chosen jury had reached without hearing counter-arguments."

He called out one of the students by name -- graduating senior Michael Rushmore, who called Birgeneau's decision to withdraw "a minor victory."

"It represents nothing of the kind," Bowen argued. "In keeping with the views of many others in higher education, I regard this outcome as a defeat, pure and simple, for Haverford - no victory for anyone who believes, as I think most of us do, in both openness to many points of view and mutual respect."

Critics have noted the irony that Bowen is calling for an open discussion that fosters mutual respect in an intemperate speech delivered to students who are leaving the school, and will therefore have no chance to respond.

Watch a brief clip of Bowen's speech below.