Archaeologists hunt for ancient pyramids and temples in Sudan 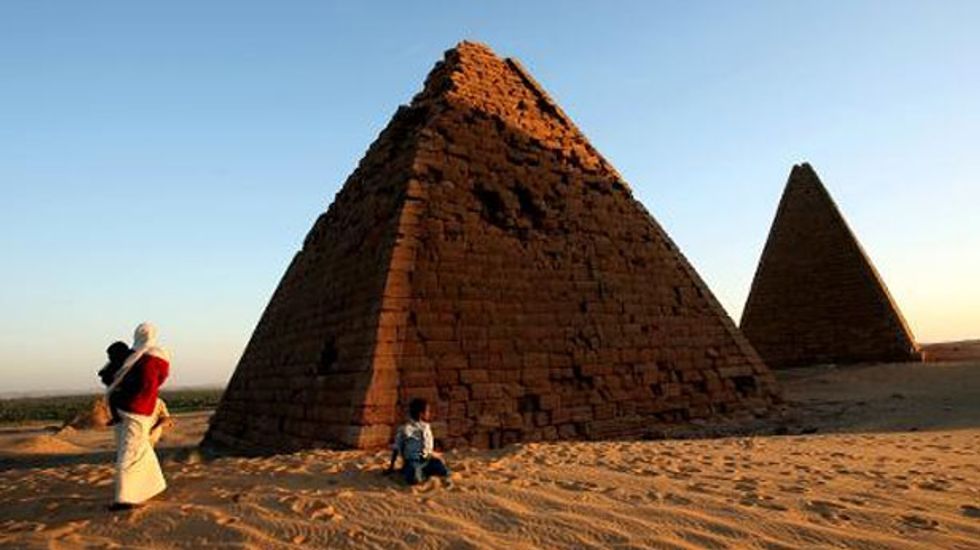 Little by little, the deserts of northern Sudan slowly reveal the secrets they have held for 2,000 years and more.

With wheelbarrows, pulleys and shovels, sweating labourers have unearthed the remains of pyramids, temples and other ancient monuments.

But much of the country's rich archaeological heritage still remains hidden, and what has been discovered remains little known to outsiders.

An unprecedented $135 million project funded by the Gulf state of Qatar aims to change that.

"Archaeologists had a dream that this site would attract more interest," Abbas Zarook said at the Napatan ruins of El-Kurru, about 300 kilometres (190 miles) northwest of the capital Khartoum.

He heads a Sudanese-American mission excavating the site.

Zarook said the Qatari funding, a five-year project announced in March, will support further discoveries at El-Kurru, and elsewhere.

"Without the Qatari donation, no one knows how long this knowledge would have been hidden," he said.

El-Kurru and more than two dozen other archaeological projects, spread over hundreds of kilometres along the Nile Valley, will benefit from Qatar’s support, officials say.

"I don’t think we will find everything hidden in five years, so we hope this funding will be extended," Zarook told journalists invited to see some of the sites that will benefit from the new funding -– the largest ever for Sudanese antiquities.

It will support projects by several foreign and Sudanese teams in northern Sudan, where the first archaeological digs took place only about 100 years ago. That was much later than in Greece or Egypt, whose pyramids are grander and much better known.

Last year, fewer than 600,000 tourists visited war-torn Sudan, where El-Kurru and other ancient cemeteries are among the few attractions.

By comparison, the much older monuments at Luxor, on the banks of the Nile in southern Egypt, have drawn millions of visitors annually.

The Napatan civilisation, which emerged after 900 BC, extended its influence north to Luxor and then briefly conquered all of Egypt.

A royal burial site, including remains of a pyramid for the powerful Napatan king Piangkhi, is part of a vast UNESCO World Heritage site that includes El-Kurru.

Zarook's Sudanese-American team is still unravelling El-Kurru's mysteries, about a century after the first excavations.

"We are trying to preserve what has been found before, and to discover what remains hidden," Zarook said at the site near a farming village.

During the excavation season which ended in March, workers removed tonnes of sand and other debris from El-Kurru's largest pyramid, which archaeologists believe was about 35 metres (115 feet) high.

It is located next to Piangkhi's pyramid, perhaps because of a family connection, said Geoff Emberling, assistant research scientist at the University of Michigan's Kelsey Museum of Archaeology.

Emberling and his Sudanese colleagues are also digging out a nearby building with more than 20 columns. They think it was a mortuary temple dedicated to the worship of a dead king.

"It's a beautiful and well preserved building, but we have not yet found conclusive evidence of the date of its construction," he told AFP.

Closer to the Nile they are excavating an ancient city wall, hoping to find the settlement which was associated with the royal cemetery.

"Sudan presents some interesting and rewarding opportunities for archaeologists now. In some ways we know less about the archaeology of the Middle Nile and surrounding areas than about other major ancient civilisations, and there are real opportunities to make major discoveries," Emberling said.

El-Kurru includes strikingly preserved hieroglyphics but the site is guarded only by a lone policeman.

That is typical for Sudan's archaeological heritage in the remote desert, where the stonework of some relics has collapsed, and there are no explanatory signs to assist visitors.

Qatar's funding will help restore some monuments, while also protecting the fragile archaeological sites and improving information for tourists.

The National Museum in Khartoum will be modernised, and two presentation and conference centres built at Gebel Barkal and Meroe, whose pyramids and temples are on UNESCO's World Heritage list.

Claude Rilly, director of the French archaeological mission in Sedeinga, north of El-Kurru, is a world expert in the ancient Meroitic language, whose numerous inscriptions have been found in Sedeinga's tombs.

The language is little understood, and his efforts to decipher it will be another beneficiary of Qatar’s support.

Since work began at Sedeinga in the 1960s, around 250 pyramids have been excavated.

The main part of the necropolis dates from 400-300 BC, at the end of the Napatan era, which was followed by the 700-year reign of the Meroe kingdom.

The deserts yielded fresh surprises during the French team's latest Sedeinga mission, which finished in December.

They found "very beautiful" architectural detail, including a mysterious, massive square block in the middle of the remains of one pyramid, Rilly said.

"We have no explanation for that", although it may have been a way of reinforcing the structure, he said.

The pyramid is one of four whose remains they unearthed at the vast necropolis last season, and which confirmed "an incredible diversity" among Sudanese pyramids that distinguishes them from their Egyptian cousins.

"No pyramid has ever been found in Sudan with this kind of architecture," Rilly said.