Are feminists trying to upgrade butt-grabbing creeps to criminals? No. 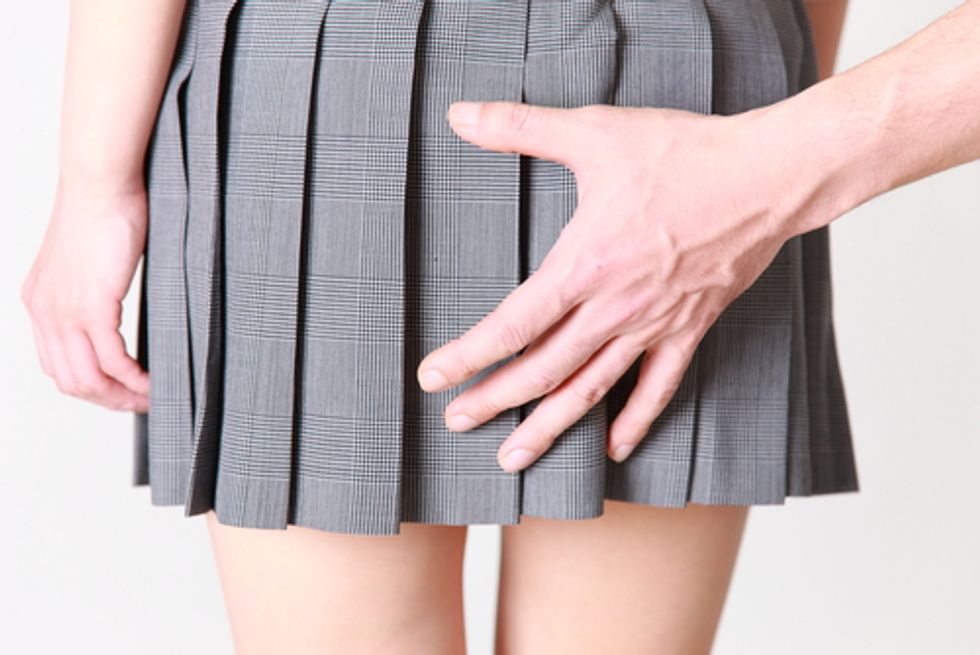 Is defending this really the hill to die on?

Yesterday afternoon at TPM, I wrote a rebuttal to A.J. Delgado of the National Review arguing both that feminists have "brainwashed" women into believing consensual sex after imbibing alcohol is "rape" and her insinuation that women routinely accuse men of rape in order to punish those men for not calling in the morning. Her piece was so bad and so full of straw man attacks, however, that I didn't even room to rebut all of her nonsense. So I thought I'd do a post here taking another an entirely separate pile of horseshit she wedged into her piece. She tries to argue that the proliferation of the phrase "sexual assault" is another attempt by feminists to "expand" the range of behavior that men supposedly get dinged for oh so cruelly.

Lastly, there is the move toward using the term “sexual assault” rather than “rape.” Why? As a conveniently vague term, “sexual assault” encompasses a variety of acts yet nonetheless sounds horrific. Instances of “sexual assault” are, naturally, far higher than those of rape, and we can count on the public to blur and forget the distinction between the two. The resulting statistics of sexual-assault instances are then alarming, leading to greater attention for the feminist-warriors and vindication of their theories.

As someone who writes about this, I can actually say it's the opposite: Feminists use "sexual assault" not to blur lines, but to be as exacting as possible. Frequently, feminists call something "sexual assault" because it's an assault, but it doesn't rise to the level of a rape. You know, like how the law distinguishes between punching someone in the snout and murdering them. But she doesn't like the term sexual assault, because, fuck I don't know. I don't think she does either, because this:

While violating a woman is an awful act, regardless of degree, there is a difference between grabbing a woman’s breasts and violent, forced penetration.

Yes, there's a distinction. That's why we call one "rape" and the other "sexual assault".

Shutting down any avenue towards naming and discussing the behavior  does seem to be her end goal here, as she goes out of her way to minimize sexual assault by deliberately conflating it with a more minor transgression, sexual harassment.

Keep in mind: Men can now be shamed with the “sexual assault” offender label for minor acts. If a friend jokingly comes up behind a girl and slaps her butt, that is, by today’s definitions, a sexual assault.

Friends don't jokingly slap each other without consent. If she's imagining a consensual relationship where ass-slapping is a thing they do---think the sports world and how guys do the ass pat thing---then what she's doing is direct lying. No one---no one---thinks that welcome, consensual attention is harassment or assault. If, on the other hand, she has male friends who run around slapping women against their will in order to make those women uncomfortable, that is what feminists call "sexual harassment". Not assault, as Delgado claims, but harassment.  As far as I know, no one thinks harassment is an offense that should be punished with jail time, unlike assault.

But a little common sense needs to be invoked here, something Delgado seems to be really short on. A guy who runs around  slapping women on the ass as an act of petty dominance is an asshole and a harasser. If he does it at a party, he deserves it if someone slaps him in the face in response or, better yet, if he's thrown out on his ass and told never to return. If he does it at work, he deserves to be fired. No one is saying put him in jail. But if a guy corners a woman so she can't escape and proceeds to grope her ass, then that level of escalation justifies treating it like a form of sexual assault, and the cops should be able to act.

Of course, that should serve as a reminder of something that Delgado pretends is not true: Figuring these questions out is what law enforcement and due process is about. Delgado, as is common with rape apologists, acts like sexual assault is somehow exempt from the system of examining testimony and evidence and coming to a conclusion based on that from it. She asserts, without evidence, that a frat boy slapping asses at a party, through a mysterious process that she fails to explicate, gets the "label" of "offender". (Does the Beygency descend out of nowhere the second the soundwave of an ass slapped gets out into the atmosphere, so they can tackle the harasser to the ground and tattoo "offender" on his forehead?*) In reality, a man who groped a woman and was accused of sexual assault would have a lengthy process to make sure that the he wasn't punished unduly. First, law enforcement would examine if the accusation was serious enough to merit calling it as assault in the first place---and most law enforcement is super reluctant to spend resources on monitoring ass-grabbing unless it was a very dangerous and scary ass-grabbing (and one that suggests the ass-grabber is ready to graduate to more serious assaults) indeed.  Then, if it ever made it past that process, there would be a grand jury and jury trial and come on. I'm starting to make my eyes hurt from the rolling. Ass grabbing doesn't result in labels, jail time, or any of the other things that Delgado, in all her touching concern for ass-grabbers, is worried about.

Of course, there's another way that people get labeled: through social networks. If you harass women at parties, they might say that you are the kind of guy that harasses women at parties, and yes, that often results in people not liking you. If that's Delgado's concern, and I suspect it is, I have to wonder why sexual harassers deserve special protection from getting a reputation that the rest of us don't get? If you're a liar, a cheat, belligerent, or rude, then that will haunt you as people share that information about you. So why do ass-grabbers deserve some sort of exception from having people discuss their behavior?

I've had a lot of people ask me why it is that women are willing to make excuses for sexual harassers and abusers the way that Delgado is doing here. I think that her image of "a friend jokingly comes up behind a girl and slaps her butt" is the key to understanding. Being the girl who sees that kind of behavior and pretends it's cute and funny instead of gross and mean is an easy way to get male approval. You might even get to hear that you're "cool" and "not like those other girls". That can feel good, especially if you've been socialized to believe---as most of us have been on some level---that male opinions count for more than female opinions.

Obviously, not all men 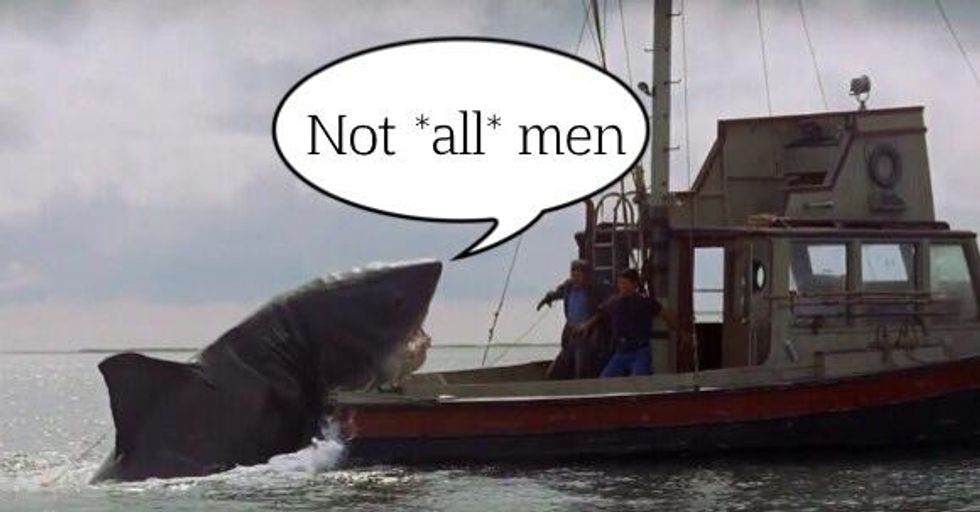 Sorry, let me restart this. Not all men think that it's cool to sexually harass women, nor do they compliment women for putting up with it. But men who do like sexually harassing women are going to go out of their way to flatter women who smile at it, whereas no one compliments women for standing up to it. So if male flattery is important to you, a quick-and-dirty way to get it is to side with harassers and claim it's no big deal and all a joke, and let the compliments roll in. Or, the paychecks from NRO, which is also a huge incentive.

Of course, being the woman who makes excuses or laughs at sexual harassment has a downside. You generally don't want to signal to men, especially men who love dominance displays, that you eat shit with a smile. They may "like" you, but they sure don't respect you.