Atheists need to put the Christian right on the spot, ask them if they really think we're less American 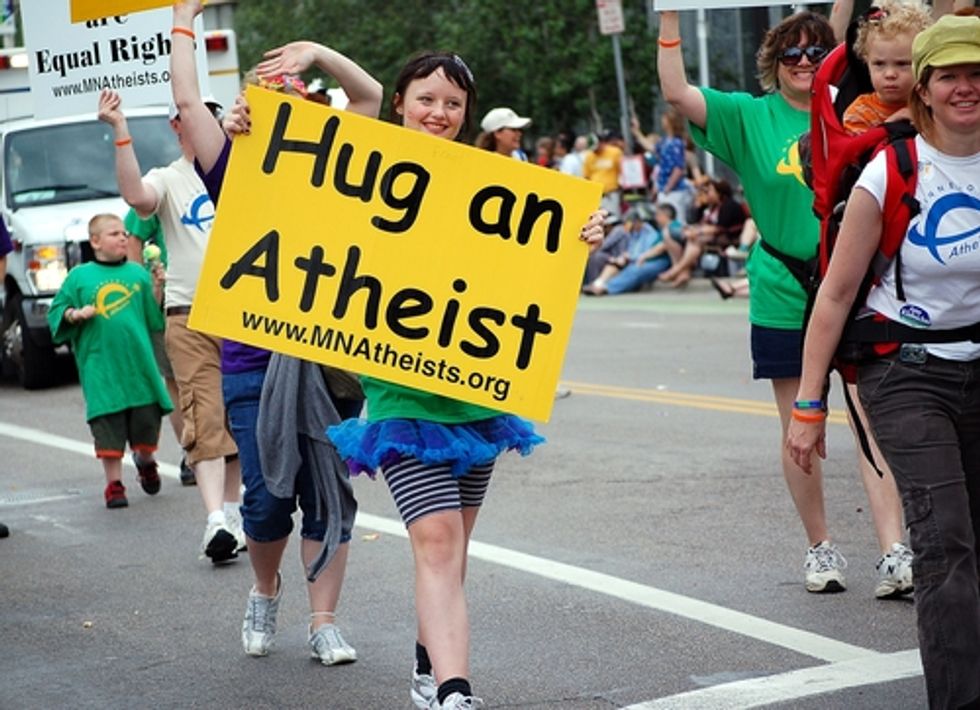 One of the reasons it's important for atheists to organize and make themselves more visible is that it's probably one of the best weapons against bullshit like the Supreme Court coughed up yesterday, allowing explicitly Christian prayer to open legislative sessions. Ian Millhiser explains why it's so dangerous:

Town of Greece v. Galloway is the case that proponents of the separation of church and state have feared every since Justice Sandra Day O’Connor left the Supreme Court in 2006. It strikes at the heart of the constitutional prohibition on government endorsement of religious doctrine or belief. And it brings religious conservatives within inches of a victory they have sought for more than two decades. For the sort of people who believe America should be a “Christian nation,” today is a today to celebrate.

To explain, Justice O’Connor was the Court’s leading supporter of the view thatgovernment may not endorse a particular religious belief or take any action that could convey such a “message of endorsement to the reasonable observer.” This view placed her sharply at odds with the four other conservatives on the Rehnquist Court. Thus, when O’Connor was replaced with the much more conservative Justice Samuel Alito, most Court watchers expected this prohibition on government endorsements of religion to fall in short order. The most surprising thing about the Town of Greece decision isn’t that begins the process of doing so — it is that it took the Roberts Court this long to reach such a decision.

The rationale for government endorsement of religion, according to Kennedy, is that it's simply the recognition of "traditional practices that recognize the role religion plays in our society" and doesn't count as an attack on religious freedom unless you're actively being forced to pray yourself. Basically, the argument is that since the group "Americans" are largely Christian, it's okay to make government explicitly Christian so long as the few non-Christian Americans are allowed to practice their unrecognized and disdained religions without fear of overt government reprisal. This is a bullshit argument, of course, as the First Amendment explicitly says that Congress shouldn't make laws "respecting an establishment of religion", and holding up Christianity as a faith that is better than and somehow more American than other faiths is doing just that.

Unfortunately, the sense that "Americans" and "Christian" are basically synonymous, except for a few outliers, makes a lot of emotional sense to a lot of people. The people most poised to interrupt this narrative are the non-religious. One in five American adults has no religion at all and, when it comes to people under 30, it's one in 3. This isn't a country where nearly all people are Christian, except for a handful of religious minorities. One in five is a significantly sized minority, big enough that marginalizing them---in the way that Jews (1 in 50) and Muslims (1 in 120) are unfortunately marginalized now---is much harder to do.

That the non-religious are the biggest threat to the concept of America as a "Christian" nation hasn't passed notice on the right, either. Witness Todd Starnes having a meltdown over pro-secularists insisting that it's wrong for the government of a religiously diverse nation to openly prefer some religious beliefs over others. He compares secularists to "Hitler"---who was religious and routinely invoked religion in his speeches, by the way---and complains that not being held up as the bestest Americans of all Americans is somehow an assault on the rights of Christians, specifically claiming "the Obama administration has been waging a war against people of the Christian faith."

Dunno what the administration has to do with this, but I think that this is a discussion that we should be willing to have: Is it right for a country to deliberately exclude large groups of voting, tax-paying, law-abiding citizens because we have different opinions about supernatural beings? I mean, right now most Christians say "yes", but I think the deep unfairness of it will wear them down if it's pointed out over and over again, just as the unfairness of excluding gay people from marriage for arbitrary reasons eventually dawned on people. Non-religious people have the numbers on this, and so we're in a good spot to make this argument. And we need to get out there and make it, over and over again: We are just as American as you are, and when you have government endorsement of religion, you are saying we don't count for as much. Make them defend the idea that we are less-than. It's not a good look.