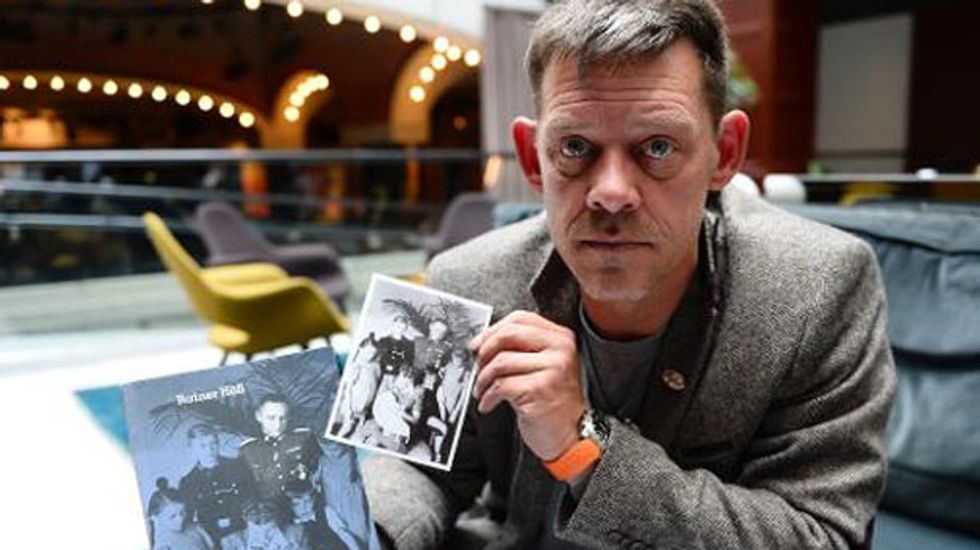 Rainer Hoess was 12 years old when he learned he was the grandson of a man who oversaw the murder of a million people as commandant of the Nazi death camp at Auschwitz.

Growing up in post-war Germany, Hoess failed to understand why his school gardener -- a Holocaust survivor -- was consistently harsh towards to him, until a teacher revealed the terrible truth.

Rudolf Hoess was the longest-serving commandant of the Auschwitz-Birkenau camp in occupied Poland that became an enduring symbol of Nazi Germany's genocide of European Jews.

"For a 12-year-old boy it's huge information," his grandson said.

Now aged 48, Hoess has turned his family burden into the driving force of a full-time commitment to fighting right-wing extremism.

He was in Sweden recently to promote a campaign against the rise of neo-Nazi movements across Europe, launched Wednesday ahead of the upcoming European elections.

"Right-wing extremists are not stupid," he said. "They are growing, gaining ground, very slowly but very effectively."

"I'm very aggressive against them," added Hoess, who has turned down multiple offers to participate in neo-Nazi events.

"Every time I have the chance to work against them, I will do that."

Entitled "Never Forget. To Vote", the campaign launched by the Swedish Social Democratic Youth League (SSU) ahead of the May 22-25 vote sees the ballot box as the best defence against resurgent far-right extremism.

"To have Rainer at the front of this initiative is a way to show that he can never forget and we should never either," SSU head Gabriel Wikstroem said.

One million Jews were killed at Auschwitz from 1940 to 1945 along with more than 100,000 non-Jewish Poles, Roma, Soviet prisoners of war, homosexuals and anti-Nazi partisans before the camp was liberated on January 27, 1945.

Hoess experimented with different methods of mass killing, eventually settling on the use of the pesticide Zyklon B to gas his victims.

He went into hiding after World War II but was captured by the Allies in 1946 and hanged the year after near the infamous Auschwitz crematorium.

"He brings a lot of pain in our family, not only for his children but over decades," his grandson told AFP.

"Generation after generation we bear the same cross he put on our shoulders."

Despite the disapproval of other family members, who preferred to bury their past, he has spent more than 20 years researching his background and the Nazi movement.

Hoess, who wears a Star of David around his neck, devoted the last four years to educating schoolchildren about the dangers of right-wing extremism.

What began when his children's teachers asked him to share his story with pupils at their school, has now become a full-time job taking him to more than 70 schools in Germany last year alone.

His aunt Brigitte, one of Rudolf Hoess's five children, chose the opposite path.

Only last year, at the age of 80 and dying of cancer, she chose to share her story with The Washington Post, on condition her married name and any details hinting at her identity be kept hidden.

Brigitte told the paper how she managed to leave Germany as a young woman, becoming a fashion model for Balenciaga in Spain where she met her future husband, a US engineer with whom she moved to Washington.

Ironically, she ended up working in a fashion salon owned by a Jewish lady.

The owner learned of Brigitte's past after she revealed her identity to the shop manager, but decided to keep both her and the secret.

Through his own research, Hoess has met many Holocaust survivors, even travelling to Israel to take part in a documentary -- a delicate undertaking, he admits.

"It was a little bit tricky, as the grandchild of a mass murderer to go to Israel."

While there he was asked by a group of Jewish students what he would have done if he had met his grandfather.

His impulsive reply -- which he now thinks overly emotional: "I would have shot him."