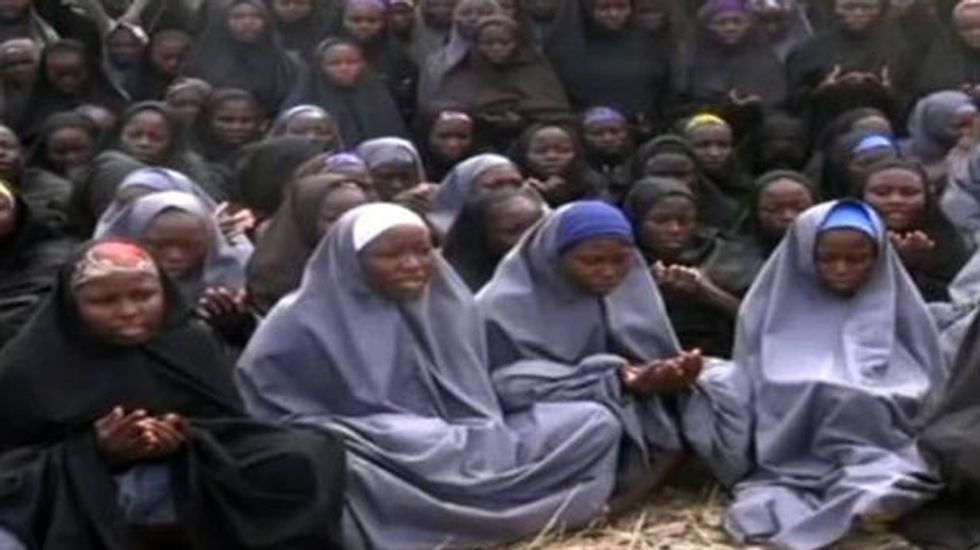 Boko Haram released a new video on Monday claiming to show the missing Nigerian schoolgirls and alleging the teenagers had converted to Islam and would not be released until all militant prisoners were freed.

The group's leader, Abubakar Shekau, speaks on the video obtained by AFP for 17 minutes before showing what he said were the girls, in Muslim dress and praying in an undisclosed rural location.

A total of 276 girls were abducted on April 14 from the northeastern town of Chibok, in Borno state, which has a sizeable Christian community. Police say 223 are still missing.

The footage shows about 130 girls in black and grey full-length hijabs sitting on scrubland near trees, reciting the first chapter of the Muslim holy book, the Koran, and holding their palms upwards in prayer.

Three of the girls are interviewed. Two say they were Christian and had converted while one said she was Muslim.

All three pronounce their belief in Islam, dispassionately to the camera, sometimes looking down at the ground and apparently under duress.

Most of the group behind them were seated cross-legged on the ground. The girls appeared calm and one said that they had not been harmed.

There was no indication of when the video was taken, although the quality is better than on previous occasions and at one point an armed man is seen in shot with a hand-held video camera.

Civilians, though, have borne the brunt of recent violence, with more than 1,500 killed this year alone while tens of thousands have been displaced after their homes and businesses were razed.

Nigeria's government has been criticised for its lack of immediate response to the kidnapping that triggered international outrage. It acted after mounting global condemnation at Shekau's threats to sell the girls as slaves.

President Goodluck Jonathan has now accepted help from the United States, Britain, France, China and Israel, which have sent specialist teams to help in the search effort.

In the video, Shekau appears in front of a lime green canvas backdrop wearing combat fatigues and carrying an automatic weapon. Shekau does not appear in the same shot as the girls at any point during the 27-minute video.

Speaking in his native Hausa language as well as Arabic, he restates his claim of responsibility made in a video released last Monday and said the girls had converted to Islam while others had not.

"These girls, these girls you occupy yourselves with... we have indeed liberated them. These girls have become Muslims," he said.

"There are still others who have not converted and are holding on to your belief. There are many of them," he added.

"You are making so much noise about Chibok, Chibok, Chibok. Only Allah knows how many women we are holding, the infidels who Allah commands us to hold."

The militant leader said that Boko Haram's brothers in arms had been held in prison for up to five years and suggested that the girls would be released if the fighters were freed.

"We will never release them (the girls) until after you release our brethren," he said.

Boko Haram has used kidnapping of women and young girls in the past and Shekau indicated that more were being held.

Eleven girls were abducted from the Gwoza area of Borno state on May 4.

There was no immediate response to the Boko Haram video from Nigeria's government but President Jonathan has previously said that he believed the girls were still in Nigeria and would be freed soon.

There have been fears that the girls may have been taken into neighbouring Chad or Cameroon, from where Boko Haram is said to have launched attacks in the northeast and may have camps.

Nigeria's army is currently concentrating its efforts on the Sambisa forest of Borno state while international assistance involves specialist surveillance and intelligence teams.

Washington said on Sunday that no US troops would be used in any rescue mission while the leader of the world's Anglicans, Archbishop of Canterbury Justin Welby urged for negotiations to start.

But he admitted that back-channel talks would be fraught with danger because of Boko Haram's disparate structure, its "extremely irrational" action and their "utterly merciless" history.