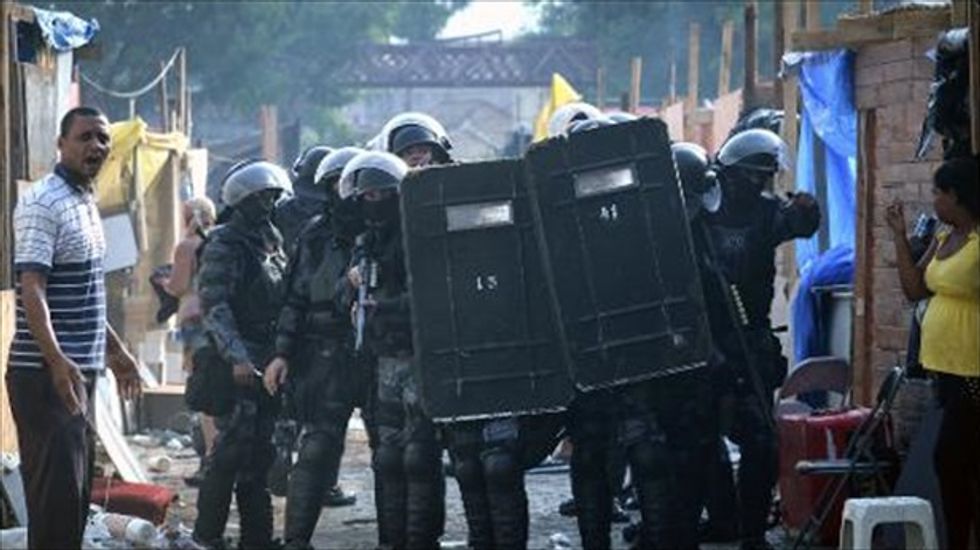 Riot police go along an alley of an abandoned lot occupied by squaters during their eviction, in Rio de Janeiro, Brazil, on April 11, 2014 [AFP]

Police in Brazil will stage a 24-hour strike Wednesday in 14 states, including six that will host World Cup matches, their union said on its website.

In some states the strike, which comes 22 days before the start of one of the world's largest sporting events, could paralyze up to 70 percent of the civilian police force, which is responsible for criminal investigations.

Affected states include Rio de Janeiro, Sao Paulo, Minas Gerais, Bahia, Pernambuco and Amazonas, all of which are home to World Cup host stadiums. Brazil has 26 states in all, plus the federal district around the capital Brasilia.

Federal police, the force responsible for immigration controls and border security, will also hold protests Wednesday, though they have decided not to go on strike for now, their union said.

Brazil has faced a series of protests and strikes for better pay and working conditions in the run-up to the World Cup and elections scheduled for October.

Last week military police, the force responsible for maintaining public order, staged a partial strike in the northeastern state of Pernambuco. The state capital, World Cup host city Recife, was hit by a wave of looting during the walkout.

Officials responsible for World Cup security have said there are contingency plans in place to deal with any strikes during the tournament.

"For that legal reason, and because I don't believe that police officers who swore to respect their nation would want to expose their country to an unacceptable situation in front of the whole world, I don't think there will be strikes during the World Cup," he said.