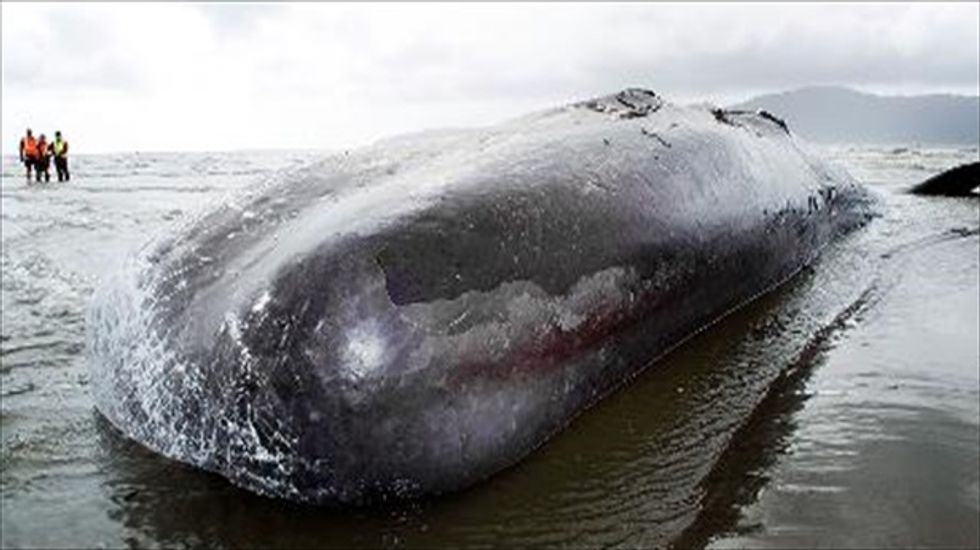 The dead body of a 15 metre sperm whale lies on Paraparaumu beach on the Kapiti Coast in New Zealand on Jan. 16, 2013 [AFP]

A fishing village in easternmost Canada tried on Monday to auction off on eBay a sperm whale carcass that washed up onto its shores.

By midday, the town of Cape St. George, Newfoundland had received dozens of bids -- the highest topping $2,000 -- before running afoul of the online auction site's rules and the law.

The 12-meter (40-foot) sperm whale carcass washed ashore about a week ago.

The town of 1,000 residents does not have the means to dispose of the rotting carcass itself, according to the mayor, and Canada's fisheries department declined to get involved.

Worried that the smell from the rotting carcass would soon become intolerable, the town's council voted on Sunday to list the whale on eBay, hoping to find a buyer to take it away.

Federal officials "didn't offer any suggestions about what to do with it, and didn't offer assistance, they just said 'You have to get rid of it', so we decided to list it on eBay," Mayor Peter Fenwick told AFP.

"Frankly we would sell it for zero if we had to... as long as they take responsibility for removing the whale," he said, suggesting that its skeleton could be put on display in a museum.

The eBay listing, after gaining notoriety, was soon removed by the online auction website because it is against its rules on not selling animals, alive or dead, an employee told AFP.

At the same time, federal officials contacted the mayor to tell him it is illegal to try to sell the whale carcass.

"We are now at a point where we want to have a look at the regulations and see if there is any way around that," Fenwick said.

He said he doesn't want to break the law by "selling a whale illegally," but added, "we don't have very much choice because if it sits there, as it starts to rot... it will give off a tremendous stench."

Coincidentally, two other Newfoundland towns faced similar problems after two endangered blue whales washed up on their shores. One of them began to bloat from a build-up of methane gas inside, threatening to explode its stinking innards on the town of Trout River.

An Ontario museum is sending a team of researchers to collect the pair of whale carcasses this week.

The rare animals' skeleton and tissue samples will be stored in the museum's research collection, which will be accessible to researchers worldwide.