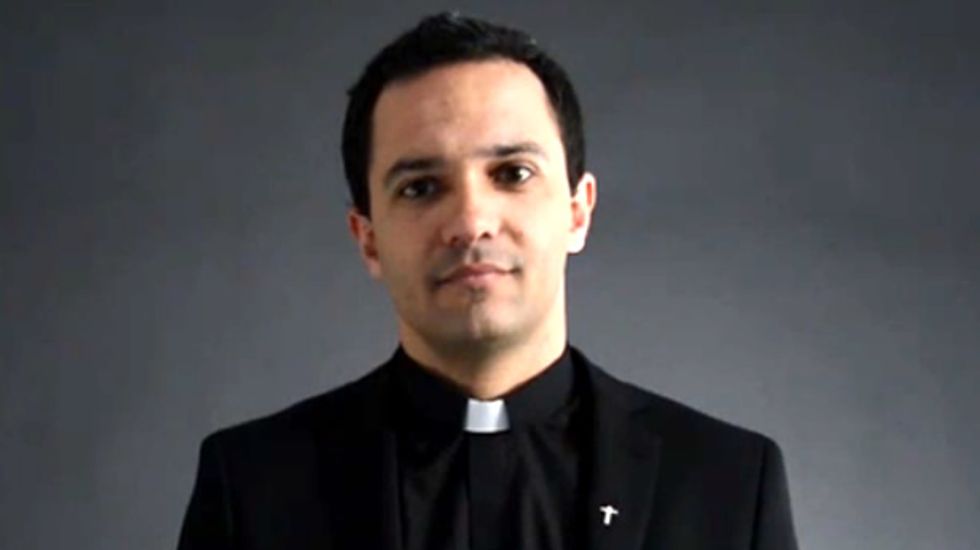 The Catholic church in France can't be accused of lacking a sense of humour. Six Catholic dioceses in Normandy have banded together to encourage the faithful to "adopt a priest" via an online video as part of their annual fundraising drive.

The 48-second video, which has already been viewed more than 22,000 times since being launched last week, targets young donors with its parody of a popular French dating site, adopteunmec.com (adopt a guy).

Adopteuncuré.com shows an actor playing a young priest, stroking his dog collar before the camera zooms in on a cross on his lapel. A soft female voice says that his dynamism is "impossible to resist" and vaunts his round-the-clock availability. She explains the benefits of an attentive, non-judgmental listener whose faith is unshakeable. The priest is "100% divine, and needs you," she says.

Donors are encouraged to contribute sums ranging from €10 for a food basket to €130 towards a day's training for a priest. They can also pay for religious clothing, mobile phones or computers. The site points out that all contributions are tax deductible.

"The dioceses wanted to rejuvenate the image of the annual parish collection by targeting people aged 18 to 40. The humour allowed us to mention the collection in an offbeat way," Xavier Signargout, the deputy bishop of Calvados, told the news magazine Le Point.

Donors across France contribute €243m to church funds every year. The Calvados region usually raises €2m which largely goes towards paying its 110 priests and 70 secular employees.

But the church in Normandy needs to expand its donor base which has been receding over the years and now stands at 80,000 people in a region where two-thirds of its 3.4 million residents say they are Catholic. The Rouen region is losing 500 to 700 donors each year.