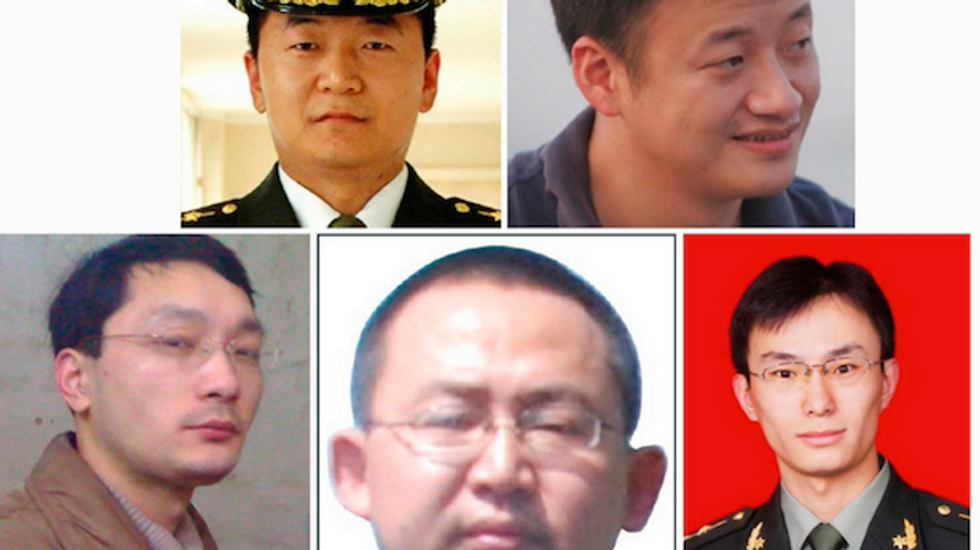 The indictment on Monday was the first criminal hacking charge the U.S. has filed against specific foreign officials, and follows a rise in public criticism and private confrontation between the world's two biggest economies over cyber espionage.

As a first response, China suspended a Sino-U.S. working group on cyber issues. In an editorial, the Global Times, an influential tabloid run by the People's Daily, the official newspaper of China's Communist Party, said this was the "right move, but we should take further actions."

"We should encourage organizations and individuals whose rights have been infringed to stand up and sue Washington," the newspaper said. "Regarding the issue of network security, the U.S. is such a mincing rascal that we must stop developing any illusions about it."

The Chinese-language version of the Global Times called the United States a "high-level hooligan".

"Suspending the operations of a bilateral group on cyber affairs is a reasonable start, but more countermeasures should be prepared in case Washington obstinately sticks to the wrong track," state news agency Xinhua said in a commentary on Tuesday. "Otherwise, it should take full responsibility for the consequences of the farce that features itself as a robber playing cop."

On Wednesday, a senior Chinese internet security official cancelled an appearance at an American Chamber of Commerce event where he had been due to speak on "the current global deficit of trust on cybersecurity." An organizer, who declined to be named, said Du Yuejin backed out of the event in Beijing "due to the sensitivity of the political environment, in particular related to the U.S. indictment."

In an editorial, the official English-language China Daily newspaper said the U.S. indictment was "ill-advised, if not downright stupid."

The cyber spying charges are likely to further sour ties between China and the United States, already under strain from a range of issues, including human rights, trade disputes and China's growing military assertiveness in contested seas.

But, despite the colorful rhetoric, they are unlikely to permanently undermine a deeply entrenched relationship, said Duncan Clark, chairman of Beijing-based tech advisory BDA.

"Bringing it into the public eye, as the FBI has done with these posters, will affect the theatre in the U.S. and China for the way in which we look at these relations," he told Reuters, referring to the "Wanted" posters of the five Chinese charged.

While China is unlikely to hand over the five officers charged, the indictment would prevent them from traveling to the U.S. or any country with an extradition agreement with the United States.