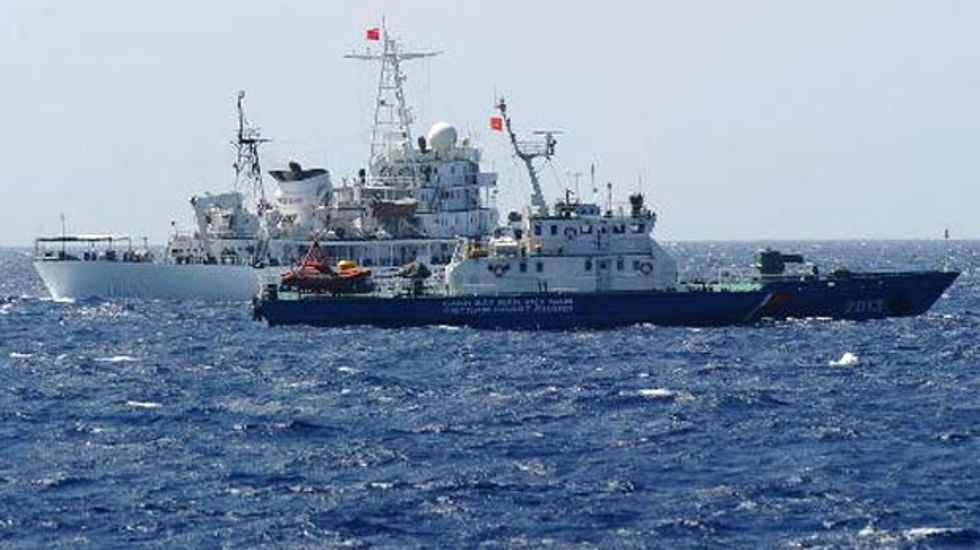 An unrepentant China on Friday defended its actions in disputed Asian waters amid warnings of war with Vietnam, as Washington voiced "serious concern" after riots left two Chinese workers dead and more than 100 injured.

Vietnam has been shaken by its worst anti-China unrest in decades following Beijing's deployment of an oil rig in contested South China Sea waters, which triggered ramming incidents involving Vietnamese and Chinese vessels.

As tensions mounted, a top Chinese general warned that Beijing "cannot afford to lose an inch" of what it considers its territory.

China has accused Hanoi of "connivance" with protesters who have targeted hundreds of foreign-owned factories in Vietnam, as long-simmering enmity between the communist rivals boiled over.

China's state-run Global Times newspaper turned up the rhetoric with a strident editorial supporting the use of "non-peaceful" measures against Vietnam and the Philippines.

"The South China Sea disputes should be settled in a peaceful manner, but that doesn't mean China can't resort to non-peaceful measures in the face of provocation from Vietnam and the Philippines," it said.

"Many people believe that a forced war would convince some countries of China's sincerely peaceful intentions," the paper added.

An AFP photographer who was taken by Vietnamese authorities to the scene of the maritime standoff saw dozens of Chinese ships, including naval vessels, facing off against Vietnamese ships near the controversial oil rig.

Whenever Chinese vessels approached, the Vietnamese ships broadcast messages saying: "We are warning you -- you are entering Vietnamese sea waters, violating our exclusive economic zone and the law of the sea."

At one point what appeared to be a Chinese surveillance plane flew overhead.

On land, calm appeared to have returned to flashpoint industrial zones across Vietnam on Friday after riot police were deployed to restore order.

Vietnam's Communist regime, wary of public gatherings that could threaten its authoritarian rule, has in the past alternated between tolerating anti-China rallies to send a message to Beijing, and violently breaking them up.

Beijing, which claims almost the whole of the South China Sea, appears to have "miscalculated" the reaction to the oil rig deployment, said Bill Hayton, author of "Vietnam: Rising Dragon".

"It has simultaneously outraged Vietnamese public opinion, hardened attitudes in the Vietnamese government, revitalised the 'China Threat' narrative in Southeast Asia and made the region more receptive to the United States' 'pivot' to Asia", he said.

US Vice President Joe Biden on Thursday "underscored the United States' serious concern about China's unilateral actions in waters disputed with Vietnam" at a meeting with a top Chinese general at the White House, his office said in a statement.

"The vice president reaffirmed that while the United States does not take a position on the competing territorial claims, no nation should take provocative steps to advance claims over disputed areas in a manner that undermines peace and stability in the region."

"We do not make trouble. We do not create trouble. But we are not afraid of trouble," he said.

"For the territory, which has passed down by our ancestors into the hands of our generation, we cannot afford to lose an inch."

Worker demonstrations this week spread to 22 of Vietnam's 63 provinces, according to the Vietnamese government, which called for "tough measures" to bring the escalating situation under control to avoid an exodus of foreign investors.

Taiwanese, Korean and Singaporean plants are among those that have been targeted by Vietnamese rioters.

Some Taiwanese workers have fled while hundreds of Chinese nationals have poured across the border into neighbouring Cambodia.

A Taiwanese businessman recounted on his arrival back in his home country how his furniture factory in Binh Duong province had come under waves of attack.

"Protesters smashed things and snatched the valuables and we were very scared. Luckily a Vietnamese supplier helped our 40 Taiwanese and Chinese managers escape to safety in a van," he said.

There is a history of rivalry between China and Vietnam, particularly over the contested Paracel and Spratly islands in the South China Sea.

The two nations fought bloody naval battles over the contested islands Paracel and Spratly islands in 1974 and 1988, and a border war that left tens of thousands dead on both sides in 1979.

Experts say labour grievances are likely to have contributed to the unrest.