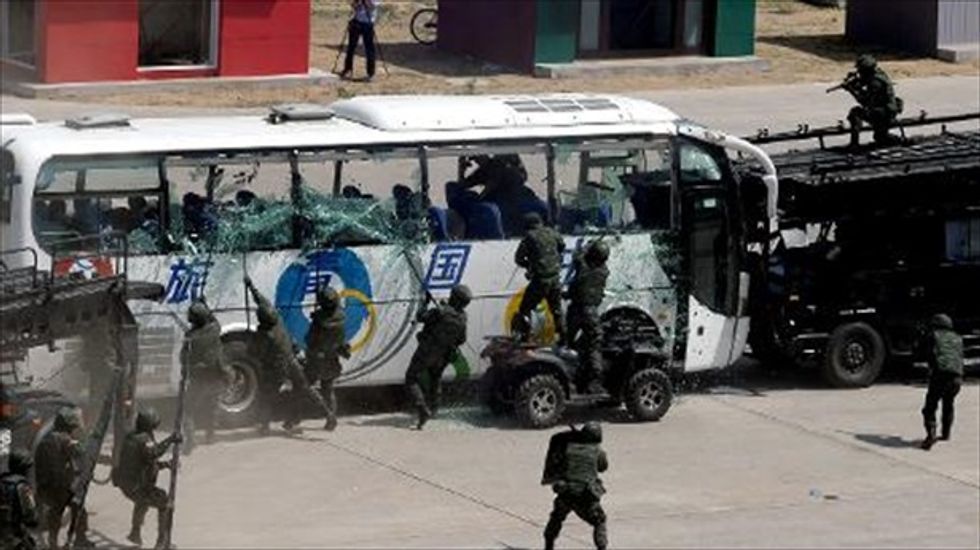 Beijing police officers, including the elite Snow Leopard Commando Unit, show off their skills at handling attempted terror attacks, hijackings and large-scale protests in Beijing on May 29, 2014 [AFP]

Police officers and commandos in Beijing showed off their anti-terrorist prowess Thursday, days ahead of the 25th anniversary of the Tiananmen crackdown and following a string of separatist attacks.

The show of force demonstrated the police force's "superb ability to counter and protect against terrorism", the Beijing Public Security Bureau said on its official microblog.

One photo published on the police microblog showed dozens of plainclothes "demonstrators" -- armed with bricks, sticks and Molotov cocktails -- attacking a line of black-clad riot police, who were standing behind a protective barricade taller than the officers themselves.

Other images showed rows of white armoured vehicles, helicopters flying above plumes of black smoke, and police dispersing the crowd with water cannon.

The exercise was the latest in a series of displays by China's Communist authorities aimed at deterring would-be attackers and assuring the public that they are well-equipped to respond to the threat of terrorism.

The spectacle of scores of riot police suppressing mock demonstrators also came days before the 25th anniversary of the 1989 military crackdown on pro-democracy protesters in Tiananmen Square, during which hundreds of people were killed -- by some estimates, more than 1,000.

China censors any mention of the crackdown and has ramped up already strict controls ahead of the anniversary on June 3-4.

Foreign news outlets had been invited Wednesday to sign up for the anti-terrorist demonstration, but by Thursday morning were informed that the event was open only to Chinese media.