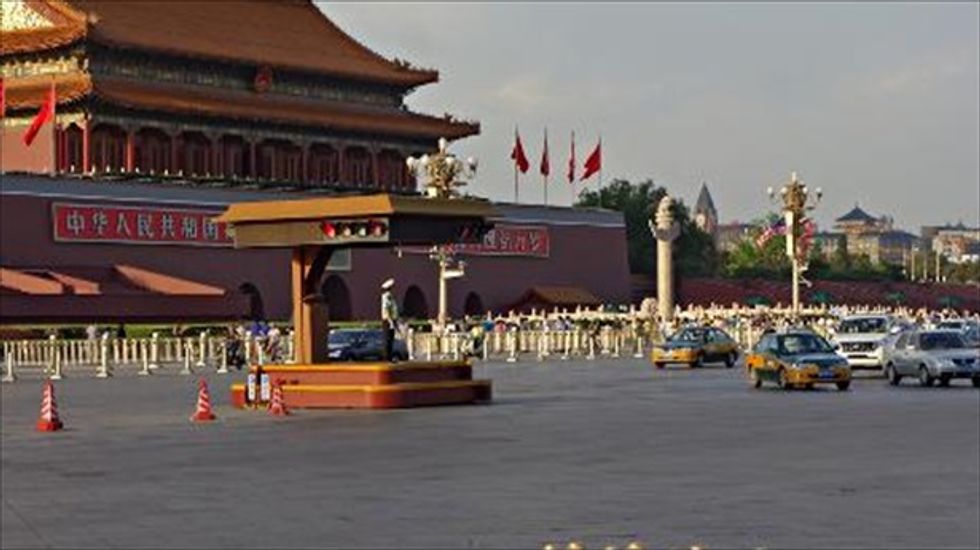 photo taken on May 29, 2014 shows a police officer (centre L) on duty on Chang'an avenue in Beijing [AFP]

An exiled leader of the Tiananmen Square protests deplored Friday the U.S. stance 25 years ago, saying the ambassador confided to her that Washington didn't "care" about the crackdown.

Chai Ling, who was commander-in-chief of the students agitating for democracy in Beijing, said that she had hoped the United States would intervene as Chinese troops crushed the uprising on the night of June 3-4, 1989.

"We stood at Tiananmen Square until 6:00 am in the morning. We were hoping Americans would come to help us, and America never came," Chai told a congressional hearing ahead of the 25th anniversary of the uprising.

Chai, who escaped China in a cargo box to Hong Kong, France and eventually the United States, said that she spoke to the US ambassador at the time, James Lilley, of the crackdown after he left Beijing.

"I said, 'Sir, why? Why did America not come? And he said, off the record, 'They do not care.' I was heartbroken, but that was the unfortunate truth," Chai said.

Chai said that she also met then vice president Dan Quayle and that he apologized for US inaction.

"But that is not enough to represent who America is supposed to be -- that is One Nation Under God," said Chai, who has embraced Christianity.

Lilley, who died in 2009, wrote in a memoir that he deplored the Tiananmen Square violence but that it was important for the United States to maintain relations with China and to encourage the growing power to open to the world.

Lilley also wrote that the approach paid "personal dividends" for him as China intervened when Saddam Hussein's Iraq plotted to kill him during the first Gulf War.

Hundreds of people died as Chinese troops cleared out central Beijing of protesters, with some estimates putting the death toll at more than 1,000.

Zhou, who now works as a financial analyst in the United States, called for Washington to step up funding for technologies to break online censorship in China, where authorities censor any mention of the Tiananmen movement.

"The life of the communist regime depends on controlling the Internet and blocking access of Chinese citizens to the outside world," Zhou said.