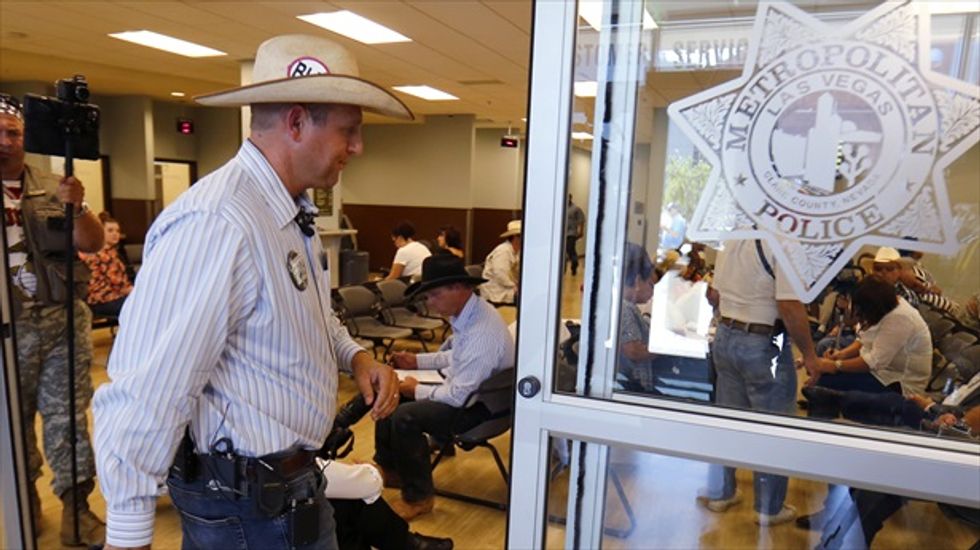 LAS VEGAS (Reuters) - Sons and sisters of Cliven Bundy, the Nevada rancher who has been resisting efforts by federal agents to seize his cattle grazing without permits on public land, attempted to file police complaints on Friday accusing the agents of assault.

Bundy's 21-year-old dispute with the Bureau of Land Management (BLM) came to a head last month when hundreds of his supporters, many of them armed militia members, rallied at his Bunkerville ranch northeast of Las Vegas, where armed federal agents were guarding a corral filled with seized Bundy cattle.

After a stand-off, the BLM federal agents retreated, saying the agency would pursue other methods to remove the trespassing cattle.

Bundy and his supporters do not recognize federal authority over the land, which has been cleared of other ranchers' livestock to protect the habitat of the desert tortoise.

Two younger sisters of Bundy and three of his sons accused the federal agents of using a stun gun and of throwing one of the sisters to the ground, among other grievances.

They also say that Clark County Sheriff Douglas Gillespie should have intervened on behalf of Bundy and his supporters.

"We're here to file a police report on the crimes that have been committed against us," said Ammon Bundy, a son of Cliven Bundy, before heading into the headquarters of the Las Vegas Metropolitan Police Department with two of his brothers, the two sisters and more than a dozen supporters.

"Our peaceful community has been shaken," Ammon Bundy said, outlining his version of the altercations between protesters and federal agents. In video footage, he can be seen showing wounds that he said came from a stun gun fired by federal agents.

Ammon Bundy on Friday also criticized the sheriff, who has acted as a mediator in the dispute.

"Where was his shield of influence?" Bundy said.

The Las Vegas Metropolitan Police Department, which is overseen by the sheriff, said it could not file a crime report against a law-enforcement agency, but instead took "voluntary statements" from 22 people regarding what it called the "land dispute" with the BLM. The complaints against federal officers included assault, intimidation, blocking roads and aiming weapons, the department said in a statement.

However, it said investigators will review the complaints and confer with the local district attorney and United States attorney before deciding "the best course of action," it said.

The BLM has said it was authorized by federal court orders to seize the cattle and that it took necessary steps to protect the safety of its officers and the public.

"We welcome Mr. Bundy's new interest in the American legal system," it said in a statement said after Friday's filings.

Cliven Bundy, a father of 14 who owes more than $1 million to the BLM in unpaid permit fees and fines, filed a similar report earlier in the week, Ammon Bundy said.

Margaret Houston, one of the sisters, can be seen in onlookers' video footage being pushed to the ground by a man during a roadside protest a few days before the stand-off.

"We was standing there hollering at them, telling them get out of here," she said on Friday before filing her complaint accusing federal agents of assault. "He threw me to the ground."

[Image: Ammon Bundy, son of rancher Cliven Bundy, files a criminal complaint against the Bureau of Land Management at the Las Vegas Metropolitan Police Department in Las Vegas, Nevada May 2, 2014. By Mike Blake for Reuters.]