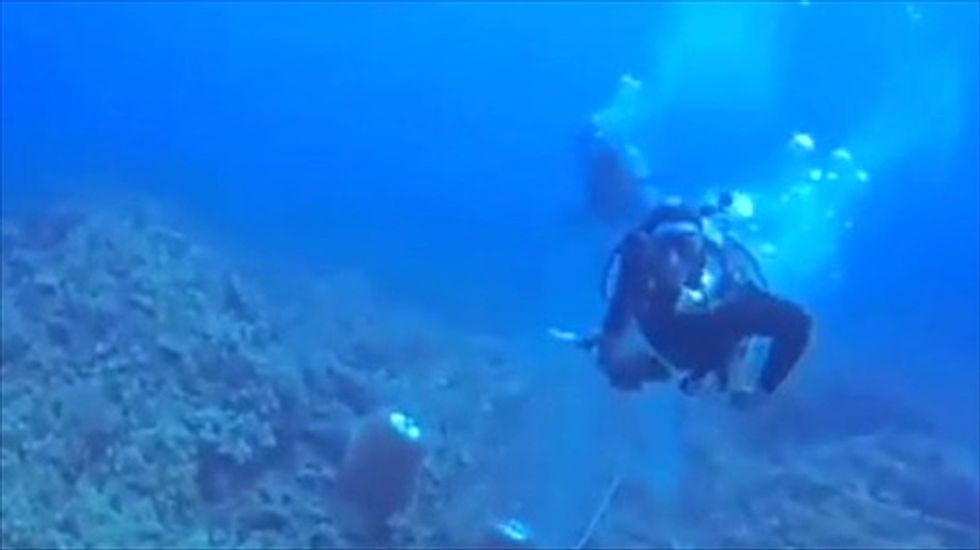 (Reuters) - Hawaii officials are investigating a potentially deadly underwater attack on a scuba diver who reported that another diver ripped off her breathing apparatus at a depth of 50 feet, in a rare incident caught on video.

Rene Umberger, 53, said on Wednesday that she and others in her group had been videotaping two divers collecting fish for the aquarium trade on May 8 off the coast of Hawaii's Big Island when one of those divers swam rapidly toward her and ripped off her regulator.

Umberger said she reinserted the regulator, which is essential for breathing underwater, putting the mouthpiece back in her mouth within 10 or 20 seconds.

"A less experienced diver would very likely have panicked, either from the attack itself or maybe from the stress of not being able to find the regulator, and shot to the surface and that could lead to death," Umberger said.

Going to the surface too quickly from a depth of 50 feet could cause an air embolism, which can lead to death or paralysis, said Umberger, who added that she slowly resurfaced over about three minutes.

The incident is under investigation by the state Department of Land and Natural Resources, which plans to send its findings to local prosecutors, said agency spokeswoman Deborah Ward. Two individuals filed complaints against each other in relation to the incident, said Ward, without releasing further details.

The agency has jurisdiction over the waters where the incident occurred, in the Big Island's Keawaiki Bay, and Umberger said she filed a complaint with that department after local police referred her there, saying they lacked jurisdiction.

Umberger said she and her team of two other divers and five snorkelers had gone out in a boat about 100 yards from shore. They were taking video of the two other divers they suspected of collecting fish for the aquarium trade, which is legal in Hawaii.

They saw the two divers using sticks to dab into coral and scare fish into nets, when one of those divers attacked her, said Umberger. The incident was captured on video by her and other members of her team.

Umberger directs a group called For the Fishes that advocates for increased protections for coral wildlife.

The identity of the diver who Umberger said attacked her could not be confirmed, and that person could not be reached for comment.

Watch video of the attack, as posted online on Wednesday, below.