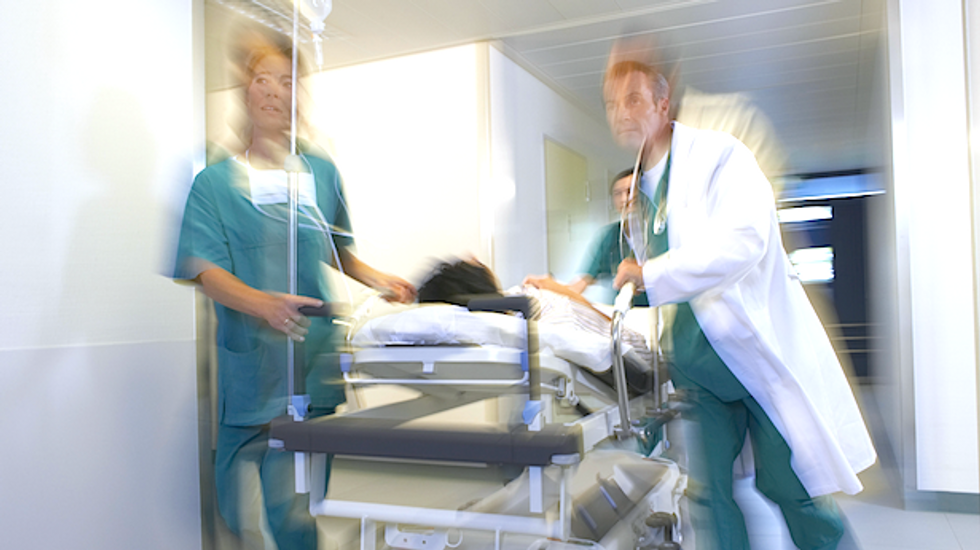 A California veteran suffered a stroke that eventually killed him nearly three years ago after police beat him up when he tried to leave a Veterans Hospital with a shunt in his arm, according to a lawsuit filed by the man’s family.

Jonathan Montano grew impatient May 25, 2011, after waiting four hours for dialysis at the VA hospital in Loma Linda, and he told a nurse he intended to leave with the needle apparatus in his arm so staffers at a VA hospital in Long Beach would not have to insert a new one.

But the nursing staff called the VA Police Department, the suit claims, and officers stopped the 65-year-old Montano by tackling him to the floor, slamming his head on the ground, and kneeing and stomping on his neck.

"This kneeing and stomping on his neck by the VA Police Department police officers caused the dissection of his carotid artery, that resulted in immediate (or very soon thereafter) blood clotting, which resulted in [his] suffering a stroke,” the suit claims.

“Moreover,” the suit claims, “the brutalization of Jonathan Montano resulted in him suffering other serious physical injuries, and associated physical, mental and emotional pain, suffering and distress."

Montano had asked his wife to wait in the car and take him to the other hospital, but she eventually went inside to look for her husband of 44 years.

The nursing staff told her that Jonathan Montano had suffered a stroke, the suit claims, which an emergency room doctor said was caused by a fall.

“Later on, one of the nurses at the VA Hospital in Loma Linda took Norma Montano aside, and told her that her husband didn't fall, but was slammed to the ground by the VA Police, that Norma Montano was being lied to, and that it wasn't right what the VA Police did to Jonathan Montano,” the suit alleges.

Jonathan Montano died June 11, 2011, of complications from the stroke.