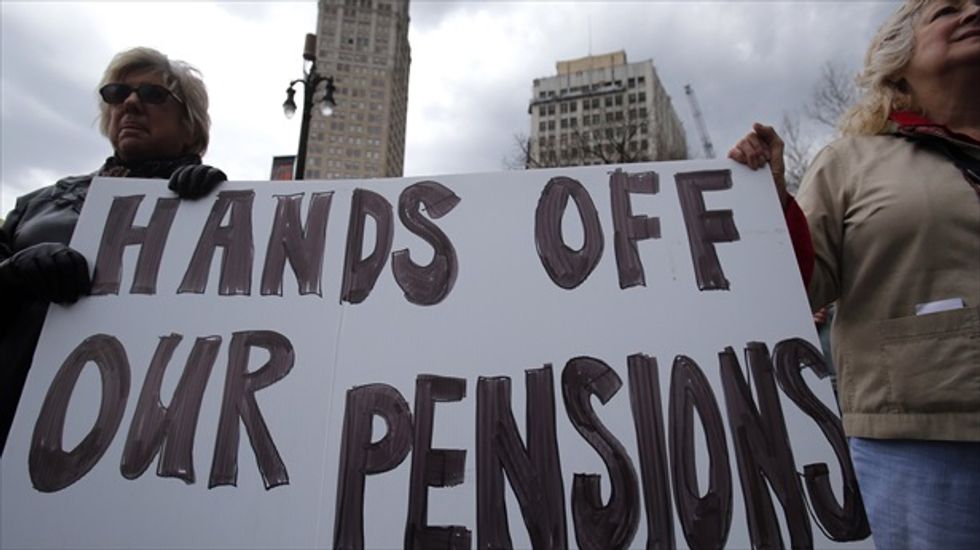 (Reuters) - The group representing the largest block of Detroit's retired workers on Friday agreed to accept the city's proposed cuts to their pension benefits, the latest in a string of deals the city has struck in an effort to resolve its historic bankruptcy.

The board of directors for the Detroit Retired City Employees Association, which represents 8,000 retired civilian workers, voted to support the city's plan of adjustment, according to the mediators appointed by the federal bankruptcy judge overseeing the case.

Under the deal, contingent on full funding of the so-called Grand Bargain to aid retired city workers, nonuniformed city retirees would accept a 4.5 percent reduction in benefits and the elimination of cost-of-living-adjustment increases to their benefits. They would also have a voice in the voluntary employee beneficiary association, or VEBA, that is planned for managing retiree health care.

Previously, the group representing retired police and firefighters agreed to back the city's adjustment plan, as had the boards for the two independent pension systems for both groups. Under their deal, public safety retirees will not have their pensions reduced, though COLAs would be cut to 1 percent.

All the deals hinge on $816 million the city would tap to aid its retired workers. Michigan Governor Rick Snyder has asked the state legislature to approve $350 million of that amount, while the rest would come from philanthropic foundations and the Detroit Institute of Arts, which pledged the money to avoid a fire sale of art works due to the bankruptcy.

The agreement added to several deals Detroit reached with other major creditors in the past month.

It also increases the ranks of creditors that Detroit Emergency Manager Kevyn Orr has lined up so far to support his plan to adjust the city's $18 billion of debt and exit the biggest municipal bankruptcy in U.S. history which was filed in July 2013.

Holdouts include bond insurance company Syncora Guarantee, which has been fighting the city over the swaps settlement.

Separately, the city on Friday was granted a delay until Monday for filing its final disclosure statement containing details of its plan of adjustment. The plan had been due to the court by the end of the day on Friday, but the court granted an extension.

[Image: Two protestors hold a sign during a May Day protest against the Detroit Emergency Manager and the municipal Bankruptcy in downtown Detroit, Michigan May 1, 2014. By Rebecca Cook for Reuters.]