Donald Sterling dismisses threat of NBA player boycott: 'Why would they do that?' 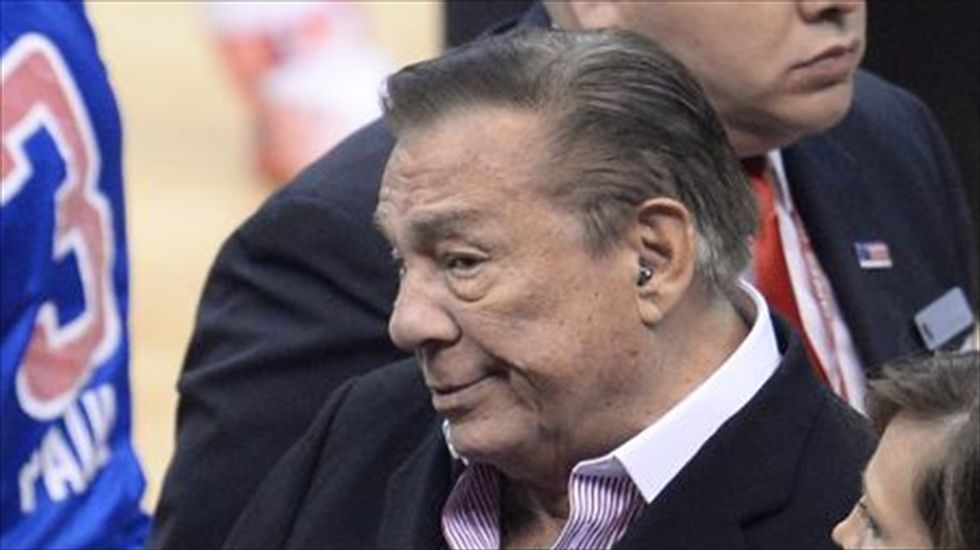 Los Angeles Clippers owner Donald Sterling, pictured during a NBA playoff game between the Clippers and the Golden State Warriors in Los Angeles on April 21, 2014 [AFP]

Donald Sterling, the embattled Los Angeles Clippers owner banned for life by the NBA for racist remarks, says he doubts players would strike if he still owns the team next season.

In portions of an interview with CNN released on the television network's website Wednesday, the 80-year-old real estate tycoon said salaries would be more important that spiting him.

"That's talk. The media pushes that," Sterling told CNN's Anderson Cooper. "Why would they do that? If they get their salaries, they are going to play."

LeBron James, the Miami Heat superstar who has led his club to the past two NBA crowns, told CNN that players are pleased with the actions of NBA commissioner Adam Silver to ban and fine Sterling and they understand the process of removing Sterling as an owner will take time.

"The direction Adam is going and the NBA is going, there should be a need for (a strike)," James said. "We trust those guys and we know they are going to take care of what needs to be done for our league and we understand that it's not going to be done tomorrow."

There had been talk of a walkout during the playoffs in the days after Sterling's comments first surfaced but that tension eased when Silver banished Sterling for life.

Sterling's troubles began late last month when recording of him making racist comments were posted online by TMZ, Sterling saying he did not want his girlfriend bringing black people to Clippers games or posting photos of herself with black people on social media websites.

Sterling has later claimed he was trying to seduce the much-younger woman, known only as V. Stiviano, to whom he had already given money and expensive gifts.

The remarks prompted a firestorm of controversy and Clippers players turned their jerseys inside out during a pre-game playoff warmup to protest Sterling before Silver issued his life ban and began the process of having owners remove the team from Sterling's control, hoping to push Sterling to sell the club, something he has said he will not do.

While a firm timetable is not yet set, Silver said Monday the league's board of governors "is continuing with its process to remove Mr. Sterling as expeditiously as possible."

Sterling apologized in a portion of the CNN interview aired earlier but in doing so insulted NBA legend Magic Johnson, prompting Silver to issue an apology to Johnson from the NBA for Sterling's latest comments.

In comments released Wednesday, Sterling asks, "What am I, a Frankenstein? What am I, some kind of ogre?

"I'm a good person. I'm a warm person. I say hello to everybody who comes to the team."

The Clippers trail Oklahoma City three games to two in their best-of-second Western Conference second round playoff series with game six on Thursday at Los Angeles.