Fatal mine explosion spurs clashes between demonstrators and police in Turkey 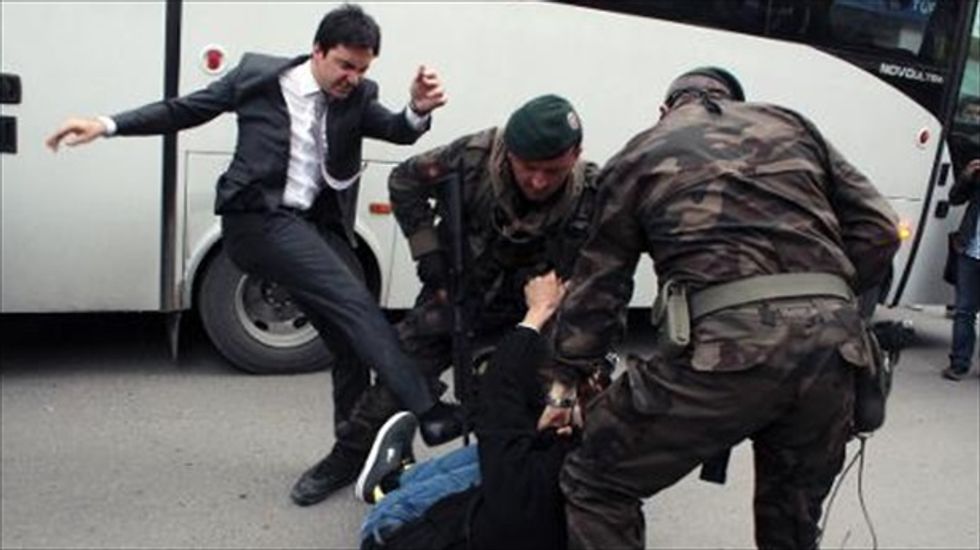 Anger at Turkey's government boiled over Thursday when thousands went on strike and police clashed with protesters after at least 283 workers died in one of the worst mining accidents in modern history.

As hopes faded for scores more miners still trapped underground two days after the devastating blast, police fired tear gas and water cannon at around 20,000 anti-government protesters in the western city of Izmir.

Turkey's four biggest unions called a one-day strike, saying workers' lives were being jeopardised to cut costs, and demanding those responsible for the collapse of the coal mine in the western town of Soma in Manisa province be brought to account.

"Hundreds of our workers have been left to die from the very beginning by being forced to work in cruel production processes to achieve maximum profits," they said in a joint statement, calling on people to wear black.

Anger at the disaster has swept across Turkey, where mine explosions and cave-ins are a frequent occurrence.

In Izmir, around 100 kilometres (60 miles) south of Soma, the 61-year-old head of one of the main unions Kani Beko was hospitalised after violent clashes with riot police.

In Ankara, police fired tear gas and water cannon on around 200 protesters, a day after thousands clashed with police in the capital and in Istanbul, accusing the government and mining industry of negligence.

President Abdullah Gul said on a visit to the mine Turkey faced "a great disaster", and vowed action to prevent further such accidents.

"Whatever necessary will be done. We need to review all the regulations, like all developed countries do, so that these accidents do not happen again," a sorrowful Gul said, with a cracking voice.

He compared the collapse to 19th-century mining disasters, saying that "204 people died in the UK in 1862 and 361 people in 1864", in an apparent attempt to downplay its severity.

Erdogan was forced to take refuge in a shop after a furious reaction from relatives of the victims and the missing, some of whom began kicking his vehicle.

Photographs of his advisor Yusuf Erkel kicking a protester in Soma sparked outrage on social media.

Defending his actions, Erkel told Hurriyet newspaper: "He attacked and insulted me as well as the prime minister. Should I have stayed silent?"

It is unclear how many workers are still trapped underground following the huge explosion on Tuesday, believed to have been set off by an electrical fault.

Mining operators put the figure at 90, but reports from rescue workers suggest the figure could be far higher. Most died of carbon monoxide poisoning.

"Turkey has possibly the worst safety record in terms of mining accidents and explosions in Europe and the third worst in the world," he told AFP in an emailed statement.

He added it was "made all the more tragic by the seemingly uncaring attitude of the government and mining companies".

The disaster has added to the huge political pressure on Erdogan, who faced mass protests last summer and a corruption scandal involving his family and key allies in recent months.

"If the claims of negligence at the mine prove true, it will have a political price," Professor Ilter Turan of Istanbul's Bilgi University told AFP.

Intensifying the pressure on Erdogan, local media reported that the general manager of the mine operator Soma Komur, Ramazan Dogru, was married to a member of his ruling Justice and Development Party (AKP).

Sinan Ulgen, head of the Istanbul Centre for Economics and Foreign Policy Studies, warned the government would struggle to contain the fallout from the disaster.

"Is this an act of God, or a case of negligence? We don't know. The government must demonstrate the political will to comply with EU standards on work health and work safety in order for this catastrophe not to become a political minefield," he told AFP.

Another body was retrieved late Thursday, bringing the confirmed death toll to 283, making it Turkey's worst ever mining accident.

Before midday prayers on Thursday, thousands of locals packed the cemetery in Soma where grave-diggers were still hollowing out a long line of graves.

All morning the loudspeakers in the town of 100,000 had been crackling with the sound of death announcements -- the names of the deceased, and details of their burial arrangements.

"My husband works in another mine," said Fethiye Kudu, watching the solemn graveside procession under the beating sun. "I came out of solidarity. It's very hard for us all."

Early reports said 787 workers were underground when the blast occurred. By late Wednesday, "close to 450" workers had been rescued, according to Soma Komur.

But accounts from rescue workers cast doubt over these numbers.

Erdem Bakin, a doctor with the Search and Rescue organisation, said only around 70 to 80 people who were between the mine entrance and the transformer that exploded had survived.

The prosecutor's office in Soma, a key centre for lignite coal mining located around 480 kilometres (300 miles) southwest of Istanbul, has launched an investigation into the disaster.

The main opposition Republican People's Party (CHP) said it asked parliament last month to investigate work-related accidents at coal mines in Soma, but the government turned down the request.

Turkey's ministry of labour and social security said the Soma mine had been inspected eight times in the last four years, most recently on March 17, and was found to comply with safety regulations.